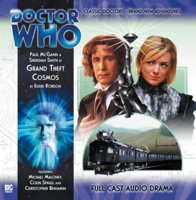 Is it my imagination or has the Eighth Doctor series of Big Finish Doctor Who audio plays been rapidly turning into a comedy strand?

Now here comes Grand Theft Cosmos, featuring the return of The Headhunter and Karen. Were you on the edge of your seat waiting for that particular reunion? Have you?

With a good cast (Michael Maloney, Christopher Benjamin, Colin Spaull) and a 19th century jewel heist theme, Grand Theft Cosmos is yet another comedy for the eighth Doctor.

The Doctor and Lucie visit nineteenth-century Sweden and become embroiled in an attempt to steal the infamous Black Diamond.

But the stone is guarded by forces not of this world…

It’s not bad. I’m not going to say it’s my most favourite thing ever. But it’s not bad.

Essentially, the piece is a sort of Ocean’s 11 with two people (well, two teams of two people, both competing with each other). The aim of the game is to steal paintings – or is it a diamond they’re after? You’ll just have to listen to find out.

It’s a bit light and fluffy with no real depth until the end, where there are some interesting SF ideas and the Doctor being cunning and clever for a change. McGann’s obviously enjoying himself, and despite being stuck in solitary confinement (see later), Sheridan Smith’s clearly having fun and enjoying a bit of an acting stretch.

The Headhunter and Karen aren’t as malevolent as before and are becoming the amoral, non-threatening mirror versions of the Doctor and Lucie. I’m sure that sounds exciting in the script editing room, but I’m not sure what that really adds in terms of drama and meaning. They’re vaguely amusing, but that’s about it. And despite the fact that Katarina Olsson who plays The Headhunter has been in every episode of the series so far playing other roles, it turns out that there was no underlying meaning to that other than the need to get reliable actors and actresses who’ll work for Big Finish rates.

The guest cast are all very good, the script moves along nicely, there are some good moments and Lucie isn’t a complete waste of space for once. It’s just a bit throwaway for my liking. When you think of all the pain and hardship the Eighth Doctor went through in the main series with Charley and <he who shall not be named again>, is this intended as a vacation for McGann where nothing really happens? Or aren’t they confident Sheridan Smith can do serious? I’m sure she can, so let’s have something a bit darker next time. The Zygon Who Fell To Earth, hey? Apparently, light then dark at the end, but we’ll have to wait to see if that’s true or not.

How much should you have to pay?

Available from Amazon.co.uk or from the almost acceptable Big Finish web site

Friday’s “the French are upset” news

The news for Friday 1st May 2009. The Daily News will return on Tuesday 5th May

Review: Doctor Who – 132 – The Architects of History

A review of the Big Finish Doctor Who audio play The Architects of History, starring Sylvester McCoy
[…]

A Name of the Doctor deleted scene