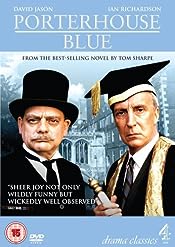 In late-’80s Britain, Porterhouse College, Cambridge, is an anachronism, its students uniformly male and (in the vast number of cases) privately educated. When the incumbent Master dies (from a stroke brought on by overeating – a Porterhouse Blue) the government gets its revenge on Porterhouse by appointing as his successor an old graduate, the politician Sir Godber Evans. One of the tiny minority of state-school students the college has had forced on it over the years, Evans returns to his alma mater determined to drag this bastion of privilege into the twentieth century. The elderly academic staff cease their bickering and close ranks against him, but the new Master finds his most implacable and unscrupulous opponent in Skullion, the college porter.

First broadcast in 1987, Porterhouse Blue was based on the book by Tom Sharpe, and starred David Jason, Ian Richardson, John Sessions, Griff Rhys Jones, and a host of top notch character actors. It’s still very funny, although even at the time of broadcast, it was satirising a Cambridge University of decades past, rather than the University as it was then: there were no men-only colleges or curfews; you couldn’t move for condoms and sex advice being handed out to freshers and research students; and porters mostly rolled their eyes at any ‘young gentlemen’ who weren’t so good at actual work. It’s fairer to say it satirised the university’s latent tendencies and attitudes with a college of extremes.

Having said that, the real-life Peterhouse College was still a bit weird.

All the same, it’s still very well written, funny and some of its points still hit home, whether you’ve ever been there or not. The students who think they can solve all the world’s problems so easily – by banning sex – the academic vs sporty divide: it’s all recognisable.

Jason opened everyone’s eyes to his acting potential with his portrayal of Skullion, the most fervent of Porterhouse supporters, and Richardson’s lefty Master makes an interesting contrast to his later, more famous Machiavellian roles. Sessions is a little bit lacking as the swot who hates all the ‘young gentlemen’ and has a crush on his bedder, but he still manages to carry the b-plot well. And there’s a cracking theme song by the Flying Pickets.

At three hours run-time, it’s a little bit of a marathon but one that’s probably worth running. No extras to speak of on the DVD, but we’re used to that by now from 4dvd.

To win a copy of Porterhouse Blue, as per usual, all you have to do is leave a witty and amusing comment below or plead your case, explaining why you’re the most deserving recipient. The deadline for entries is the 18th June 2008. Good luck!

Disclaimer: I went to Cambridge University. In mitigation, I’ll just say that I did go to one of the more rubbish colleges, rather than one of the posher central ones. It’s interesting to see, incidentally – despite the fact all the Porterhouse scenes were filmed elsewhere – how much the town has changed, and how much it hasn’t. No bike ban on Trinity Street in 1987 for starters…