A while back, Anna asked for advice on whether to give Sapphire and Steel a try. Since she hasn’t got back to us with her opinions yet, I’m guessing she’s been busy not watching Sapphire and Steel. Oh dear. Don’t give up Anna!

So here are some clips from Assignments 1, 2 and the ever-silly 5 that the PR agency responsible for promoting the box set have made available. I’m not sure they’re the best ones – they seem a bit daft out of context, much scarier in context – but for what it’s worth, here you go, Anna.

Incidentally, if you have the time available, some enterprising person has put the entire series up on YouTube:

I personally think the quality’s better on DVD – and you get more interviews and audio commentaries, too.

Assignment 2: Steel locates a time jump in a corridor 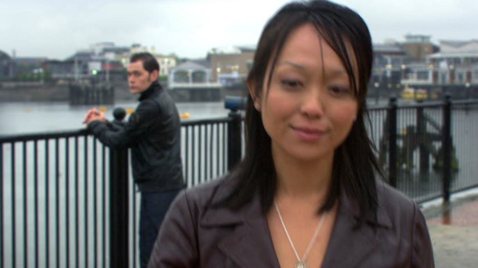 There are pretty much two writers’ names that can instil fear into the heart of a discerning Doctor Who or Torchwood fan: Chris Chibnall’s and Helen Raynor’s.

Chibnall has been responsible for some appalling pieces of work, with awful plots, awful characterisation and awful dialogue (cf Countrycide). But at least he’s fun. The opening episode of this series of Torchwood, which was one of Chibnall’s best, we all assumed would be a template for the show this series: daft, silly, but well paced and fun.

But no. At Torchwood, it seems “the script editor is out”, so consistency of tone and characterisation is something that we can’t possible hope for. Because here comes another of Helen Raynor’s massive worthy tomes.

The former script editor of Doctor Who, she was also responsible for last year’s tedious third episode, as well as the Who stinkers Daleks in Manhattan and Evolution of the Daleks.

As I remarked then,

“There’s something about Helen Raynor’s writing. It’s always nicely put together, doesn’t insult your intelligence too much and has a certain sensibility about it that makes you think she’s trying to write proper drama. But it’s absolutely dull to watch.”

And so it was with last night’s Torchwood episode, To The Last Man.

END_OF_DOCUMENT_TOKEN_TO_BE_REPLACED

Funny article over on Cracked about five movie martial artists who have gone downhill a bit of late:

The best bits are the genuine Steven Segal facts (he’s a recognised Tulku – a Buddhist holy man who reincarnates; he’s a deputy sheriff in his hometown of Jefferson Parish, Louisiana and trains their SWAT Team; he adopts homeless animals, including two dogs called Chaos and Fist). The worst bit is one of his music videos – have mercy, Steven:

As a showcase for actors’ tendencies, it would be hard to beat In Treatment. Based on an Israeli TV show, Be ‘Tipul, In Treatment is innovative stuff. It’s centred on a therapist played by Gabriel Byrne. Each night of the week, we see a session between Byrne and one of his patients, who include the likes of Blair Underwood and Melissa George. Then at the end of the week, we see Byrne visit his own therapist (Dianne Wiest) to discuss the patients he’s been treating and his feelings about them, before we start again the following week with the next sessions in his patients’ schedules.

In effect, we’re getting five weekly pieces of two-handed theatre, all bundled in one series. You like Blair Underwood’s story best? Just tune in to Tuesdays’ sessions then.

Of course, how well such a concentrated environment is going to work – very little incidental music, no incidental characters, no explosions, just two people talking – is going to be down to the strength of the acting and the writing. And they’re all great.