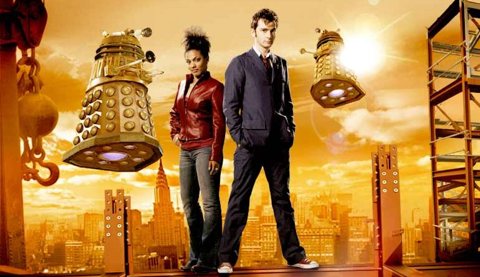 There’s something about Helen Raynor’s writing. It’s always nicely put together, doesn’t insult your intelligence too much and has a certain sensibility about it that makes you think she’s trying to write proper drama. But it’s absolutely dull to watch. Witness the third episode of Torchwood for a similar phenomenon.

So it was with Daleks in Manhattan. With a tiny group of Daleks trying to destroy life as we know it with an insidious plan, it evoked memories of classic Who stories, such as Power of the Daleks. It certainly tried to notch up similar amounts of tension and there was the old-school move of making sure all sets, including sewers, had ultra-smooth floors for the Daleks to glide over.

But coupled with a rather spoilerish edition of the Radio Times that removed all traces of surprise from the story, all it managed to do was get yawns out of me. Yawn, yawn, yawn: that was me doing an impression of myself watching the episode.

On the plus side, there weren’t many plot loopholes to snigger at this week, possibly because there wasn’t a huge amount of plot, either. Not many great lines of dialogue either. The Doctor got to be Doctor-y and scientist-like, which was nice, as well as give us all a potted history of New York and President Hoover.

Martha, however, is slowly degenerating. I think we’re going to have to face facts and accept that sweet FA is never going to be the world’s best actress. But to be fair to the poor love, she doesn’t really get much to do. After Rose supposedly destroyed the ‘legacy’ of classic Who in which female companions were just screaming eye candy (ignoring Liz Shaw, maybe Zoe, maybe Barbara, Leela, Ace, et al), now we have a companion who constantly gets split up from the Doctor so she can get captured and instead of characterisation, gets to pine after the Doctor instead.

Instead, we get personality through definition: she’s a medical student so she must be smart, huh? I don’t want to go back to the bad old days of having every story revolve around the companion to the detriment of the Doctor and everything else (cf Rose), but the least we could do is have Martha insist on a pub crawl and steal a few traffic cones, before dressing up a skeleton and taking it on the bus with her. That, at least, would be character. She should be allowed something of a personality, shouldn’t she? But we’re still waiting. Maybe not next week, but the week after next? Maybe?

I do have one question though: what’s with the space pigs again?

After last week’s fears about American accents, there were fortunately only a few duff ones to really run their nails along our internal blackboards (although having worked with someone from Brooklyn, I have to say the Brooklyn accent is always implausible-sounding, whether it’s real or not) and a few obvious bits of British English syntax and vocabulary emerging from American mouths to really raise eyebrows. The sets were nice-ish, although, as with most of the sets this series, starting to look a little bit cheap at times. The CGI was pretty good, but still noticeable when it shouldn’t have been.

But the story itself was still deeply boring. I think I just really needed to care about the people involved: history lecture instead of personality for the supporting cast just didn’t work for me and I’m not really involved enough in Martha to worry about her. Maybe once the Daleks’ insidious plot becomes more threatening, rather than their just playing with test tubes, I’ll become more interested.

I do have one question though: what’s with the space pigs again? We’ve already had one load of GM-ed pigs, back in series one. Now another load. Seriously, the Daleks came to Earth and thought “Human slaves not good enough. Must have pig slaves”? Did they have pigs in their data banks as a great possibility for future employees or were there a lot of free-range pigs roaming the Empire State Building construction site back in 1930? Did the production team simply watch too many episodes of The Muppets growing up? Or were there a load of pig masks lying around, waiting to save the budget?

More delightful reviews can be found here, here and, of course, here.

Ah. More reasons to hate those twats in the Kaiser Chiefs. Now he claims he was offered the role of Doctor Who.