At least once a month, Weekly Wonder Woman keeps you up to date on everything involving DC Comics’ premier superheroine

Yes, yes, “Weekly Wonder Woman” is stretching it a bit, given WWW has been quiet for about three weeks. But why break up a perfectly good piece of alliteration for the sake of accuracy, hey? Plus I’m here now. Let us never mention it again.

Anyway, lots of news, lots of comics. Let’s get down to it after the jump, since there’s way too much to have on the front page. Alluring, hey? Come with me. Come… come…

We’ve now got a probable title for the sequel to Wonder Woman (2017) – or at the very least the year in which it’ll be set: Wonder Woman 1984. We’ve even some photos from the movie that include not just Kristen Wiig as Barbara Minerva (aka Cheetah) but a certain Chris Pine.

I’m presuming in homage to the 1970s Lynda Carter show, in which Lyle Waggoner came back as his own son to excuse the 30-year time jump between seasons one and two, this is Steve Trevor III. And is that the Bermuda Triangle I see – the well known location of Paradise Island in said series? There might be even be an invisible jet…

New #WonderWoman set photos! Gal Gadot & Chris Pine were seen running out of a museum while filming today for the new sequel: https://t.co/PVUyyMGXo1

Gal Gadot and Chris Pine (between the gray and light blue cars) filming #WonderWoman1984 between the Navy Memorial and the Archives pic.twitter.com/GWA6pFkuXD

Expect to see even more at this year’s SDCC…

Meanwhile, Wonder Woman won this year’s MTV Movie Award for Best Fight – the one with “Gal Gadot v the German soldiers“, in case you were wondering. Actually, that doesn’t narrow it down much, does it?

It also turns out there was a full Zack Snyder cut of Justice League at one point, in which – among other things – we learn that Wonder Woman likes killing things. I wonder why it got edited?

JL: Extra couple of frames showing Wonder Woman smirking after abusing a Parademon thanks to a ScanlineVFX video (with a comparison to the theatrical cut) from r/DC_Cinematic

There’s also a Teen Titans cartoon movie coming up in which singer Halsey plays Wonder Woman. Here she talks about what that’s like:

No new TV series, unfortunately, despite a raft of commissions, but DC’s new streaming service is going to feature digitally remastered HD versions of the 70s TV series.

There’s going to be a series of 100-page comics available in Walmart. However, don’t expect a Diana title or even much by way of original content. She does at least appear in a new Justice League story, though.

Im writing WONDER WOMAN for WAL-MART which is not a thing i ever thought would be said. Original comics from @DCComics for the whole country: https://t.co/UKO5ja6t4q

Justice League member Wonder Woman is spotlighted in “The Conversion,” an all-new story from NIGHTWING writer Tim Seeley and artists Rick Leonardi and Steve Buccellato. In this single-issue story, Wonder Woman comes face to face with Ares, god of war—who sees her as a promising new recruit!

On top of that, there’s going to be an evil elseworlds version of her popping up in Michael Cray #8.

Given I’ve three weeks’ worth of comics to get through, you’d think that would be a lot to handle. But actually, despite her appearing in five issues, Diana doesn’t really get to do much.

Diana, Superman and Batman suggest that the Titans might want to be the Justice League’s official back-up team. They can even share offices.

The Brave and the Bold #5

Diana stops some gods from fighting, apologies from not stopping some other men from fighting in time and then has the plot explained to her by Batman. 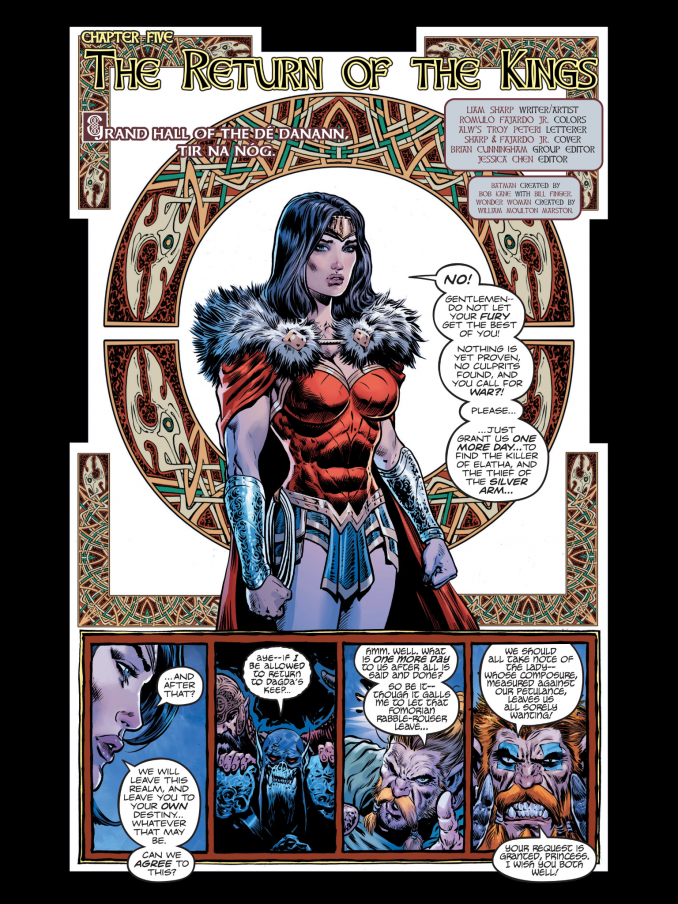 Oh dear. Maybe next issue she’ll get to do something…

That was… brief. And I’m not talking about Hawkgirl’s costume. 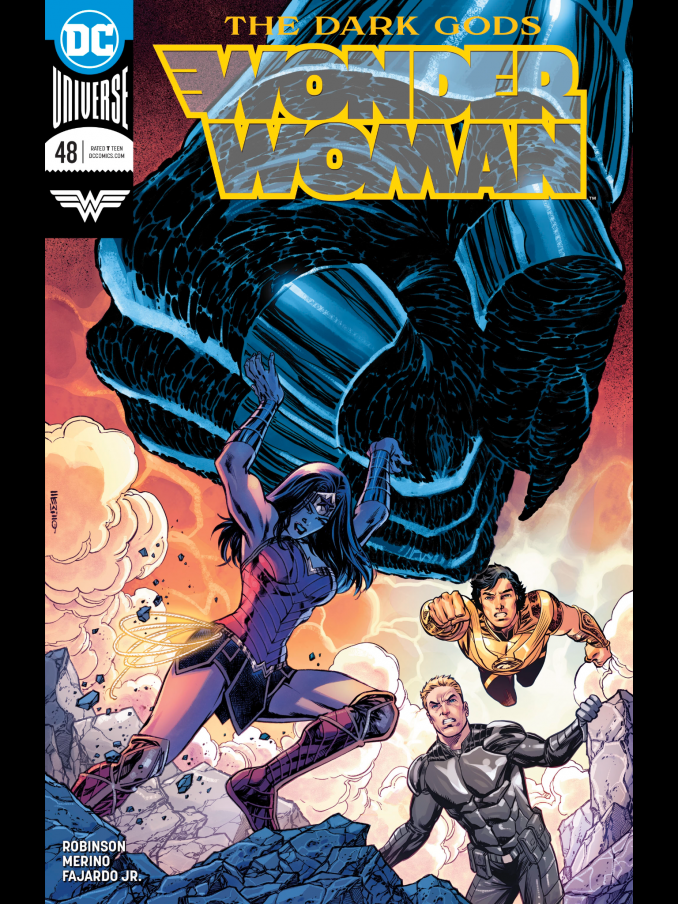 Diana disappears at the beginning of the comic, then reappears at the end. Meanwhile, her brother Jason does a lot while the Justice League gets gobbled up.

Oh well, maybe she’ll get something to do next issue… Which is this: 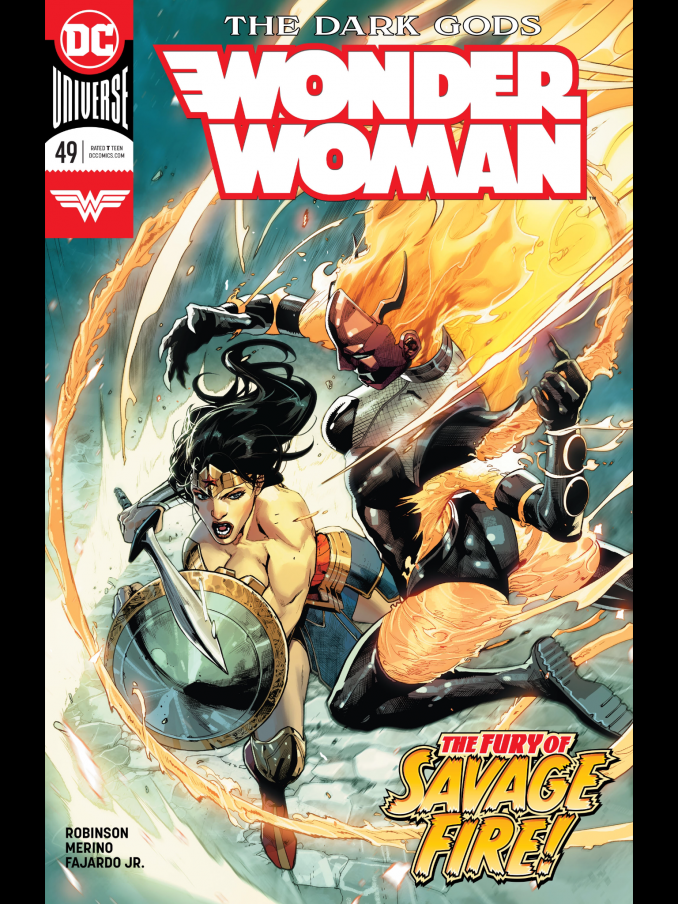 Diana hits things while Jason gets to use lots of cool superpowers, including ones Diana used to have but doesn’t any more… because. Then she dumps a Dark God in the ocean and has a chat with Steve. Then, oh dear. Jason turns evil again. That has got to stop happening. 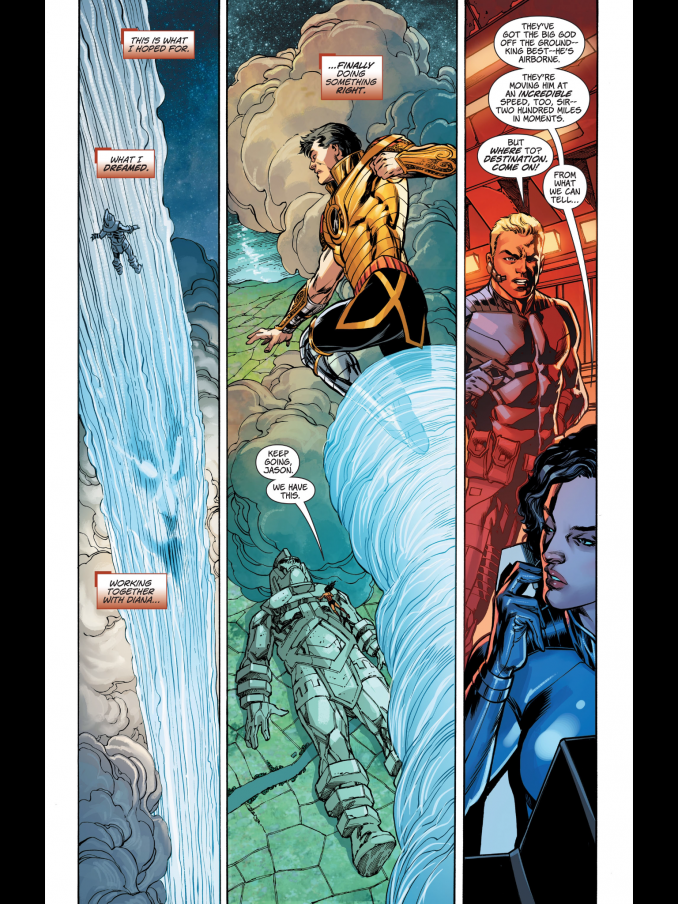