It’s the last Weekly Wonder Woman for at least a month now, I’m afraid, as I’m away on my usual August break. Sorry about that, but vacations are so, so necessary.

I don’t think I’ll be missing much in my coverage, at least in terms of comics, since despite the launch of DC Rebirth, Wonder Woman going bi-monthly and her 75th birthday, there’s not been much for me to cover of late. Okay, so in the past week, Lego has done that nice 75th birthday tribute shot above, which takes in everything from Wondy’s heady Volume 1 days fighting the Nazis through her TV series, her adventures with the Justice League, her nu52 showdown with Darkseid to Batman v Superman (Nice Ares, by the way).

DC’s done a similar thing themselves this week, showing us Wonder Woman through the ages:

There’s also been quite a bit about next year’s Wonder Woman, including a synopsis:

Wonder Woman hits movie theaters around the world next summer when Gal Gadot returns as the title character in the epic action adventure from director Patty Jenkins. Before she was Wonder Woman, she was Diana, princess of the Amazons, trained to be an unconquerable warrior. Raised on a sheltered island paradise, when an American pilot crashes on their shores and tells of a massive conflict raging in the outside world, Diana leaves her home, convinced she can stop the threat. Fighting alongside man in a war to end all wars, Diana will discover her full powers…and her true destiny.

No mention of her being a goddess or anything, but it’s a synopsis. There’s also been a lot of chat about who’s actually written the movie. We’ve had some new pictures, including one with Chris Pine as Steve Trevor with Gal Gadot:

Both Gadot and Pine will be at this year’s ComicCon, incidentally, where DC has all manner of things planned for Wondy’s 75th – you can even have your photo taken in the cockpit of her invisible jet, apparently. Hmm…

And Batman V Superman: Ultimate Edition has also been released in the UK on download (Blu-ray release date: 1 August). As well as a few precious extra bits of footage involving Diana – largely involving her hacking up Doomsday and all of which can be seen in this shoddily edited video…

…there’s a couple of featurettes about our Di. The first is a surprisingly good look over her 75th years in comics and on TV, featuring the likes of Phil Jimenez, Brian Azzarello and Cliff Chiang.

The second is more about the movie Wonder Woman, particularly how they designed her costume. Intriguingly, it also confirms that this Wonder Woman is immortal and 3,000 years old; it also features some new footage from Wonder Woman. Take a look while you still can or go and buy it:

But apart from that, it’s been quiet. She almost appeared in Action Comics #959… but we’re just going to have to wait until next month for her rematch with Doomsday.

That means we only had Wonder Woman (Rebirth) #2 to peruse. What happened in #1? Well, you could read last week’s review or you could watch this DC recap video. Apparently that’s a thing now.

Unfortunately, it’ll be no help in telling you what happens in #2 as odd- and even-numbered issues are following completely different storylines with different artists. One day they’ll converge… just not yet. More on that after the jump when we discuss ‘Wonder Woman: Year One’!

Is it any good?
It’s beautifully illustrated and cleverly written, but it doesn’t do anything very new and contradicts a few things we’ve already seen in the nu52.

Firstly, let’s look at the title: ‘Year One’. Wonder Woman is one of the main characters not to have had a Year One, so given it was Frank Miller who wrote Batman’s, it seems fitting that Greg Rucka finally be the one to give it a go for Diana.

Of course, Wonder Woman has had many retellings of her origins over the years, but while there have been all manner of changes about when it happened, whether she has a father, whether she’s made of clay, whether the Amazons are advanced or savages and so on, one constant has been the arrival of US airman Steve Trevor, whether that’s in William Marston’s original tale, George Perez’s Volume 2 reboot, the Wonder Woman TV series and movie, or Grant Morrison’s recent Earth One.

The nu52 somewhat radically decided to forego that whole process, starting us off in medias res with Wonder Woman’s arrival in the US in Justice League #3, Steve Trevor in tow, before leaping forward in time almost instantly to Steve and Diana breaking up and the beginnings of the Superman-Wonder Woman relationship that virtually defined the nu52.

But we did get a flashback or two to that first meeting in Forever Evil: Argus, with Steve drowning his sorrows in his memories of better times.

But that’s more or less it for the nu52 in terms of retelling that first meeting. No ‘Contest’ to see which Amazon earns the right to take Steve back to the mainland. No falling in love. Just crash and rescue.

Since although we’re in Rebirth, we’re still in the nu52/DC You universe, what we have in Wonder Woman #2 is the first straight out retelling in the nu52 of Diana’s life on Themiscyra, the arrival of Steve Trevor and her eventual departure from the island for the outer world. But if you were expecting anything too radical from Greg Rucka, you’d be sorely disappointed. Whether that’s because he’s a traditionalist at heart or whether it’s because Rebirth is going all out for reverential and only wants to tell stories that warm the hearts of old school fans, I couldn’t say.

But were it not for Nicola Scott on art, you’d be hard-pressed to tell the difference between this Themyscira and George Perez’s Volume 2 Themyscira, with the Amazons revering a seemingly loving bunch of gods and living in civilised bliss.

In fact, the observant will notice that Hippolyta has stopped dying her hair nu52 blonde.

Nevertheless, there are two strands at least of difference between this retelling and previous versions. The first is Steve Trevor, who’s a far more manly version of the character than before and in an important way. It’s not just the way he’s always down the shooting range or the bar with his pals… 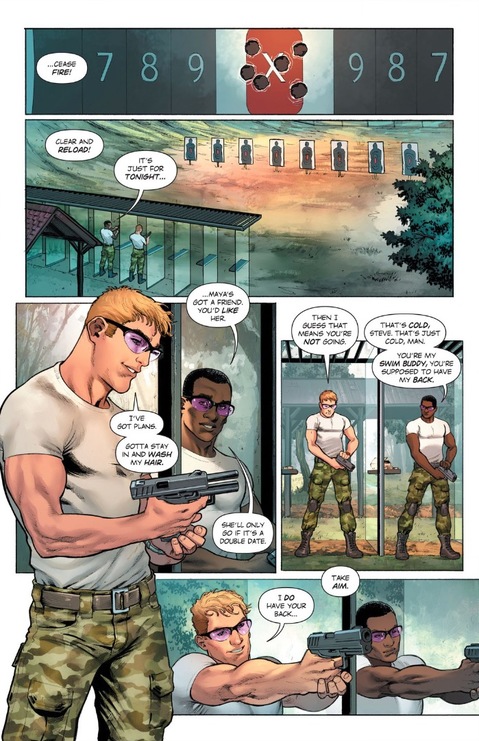 …it’s that Rucka and artist Nicola Scott use him as a direct ‘compare and contrast’ between the world of patriarchy and violence and the Amazonian world of matriarchy and love. Page mirrors page, frame mirrors frame to show what both characters have in common, what’s different and how their worlds compare.

The second is there’s also none of Azzarello’s bullying Amazons, no ‘clay’ ostracism – everyone loves Diana. In fact, it’s pretty clear that Diana’s loved a few of them, too.

Trouble is, as mentioned before, it’s hard to know how much of this is true at this stage. It contradicts most of the nu52’s stories about the Amazons as well as the previous Forever Evil: Argus storyline.

It alternates every week with ‘Wonder Woman: The Lies’, where Diana discovers that everything she believes was true isn’t. Is this just YA Elseworld, the really true true and totally true thing that will be exposed by The Lies or something else?

I should perhaps also point out that there’s an element of The Legend of Wonder Woman creeping in here in terms of there being a darkness coming to Themyscira, with our Diana discovering a strange tree in the Themysciran Garden of Eden that contains… a serpent.

All in all, though, a fun, intriguing start to this particular storyline, with some beautiful artwork.

PS I should probably also mention that that goofy photo of younger Diana that Steve Trevor was carrying around in the previous issue was probably drawn by Scott, too

What have you been watching? Including Arrowverse crossover, Counterpart and Fortitude

It’s “What have you been watching?”, your chance to recommend to fellow TMINE readers anything you’ve been watching this week Oops. Friday was busier than expected, which means last week lost out on having a […]