It’s that time again, my friends – holidays! Yep, I’m off again and since most of you are, too, as well as most of the people who make the news, there’s not going to be much point blogging for the next few weeks (ie August) so I won’t.

Well, I might. I’ll be back mid-August and since it’ll be straight back to work and there is actually going to be new tele to watch, I might end up blogging a bit. All of which is my usual faffing way of saying everything will be back as normal in September, but don’t be surprised if I pop up again in a few weeks’ time if I get bored.

Feel free to chat and discuss things here while I’m gone, though. Here are a couple of brief thoughts on this week’s viewing, too:

Star Trek: Beyond (2016)
The best of the new movies, even if as usual it involves the Enterprise getting twatted one. Lots of homages to the original series and it also feels like an old episode at times, with some genuinely alien and visually innovative moments, as well as plenty of character time, rather than a simple focus on action. Not outstanding and plenty of all-out daftness, but definitely more of a Star Trek II than a Star Trek V.

Stranger Things (Netflix)
I might do a longer review of this when I get back since although I paid almost minimal attention to it while it was in production and only reluctantly decided I’d give it a try this week for the sake of completeness, I’m so glad I did, as it’s an almost painfully beautiful, near-perfect recreation of the 80s, as well as 80s genre movies and TV, taking in everything from ET and Goonies through to The Thing and D.A.R.Y.L. I loved pretty much every second of it, from its title sequence and music through to the plot itself, which even though you can probably guess most of it just by extrapolating from other shows or anything by Stephen King, is delightful, with an innocence you just don’t get any more. One of my favourite TV things this year, give it a go, as it’s only eight episodes and Winona Ryder’s in it. A second season has already been commissioned.

Anyway, see you all on the other side and I’ll leave you with the official Wonder Woman (2017) poster and trailer, which were revealed this weekend at Comicon. They bode well. 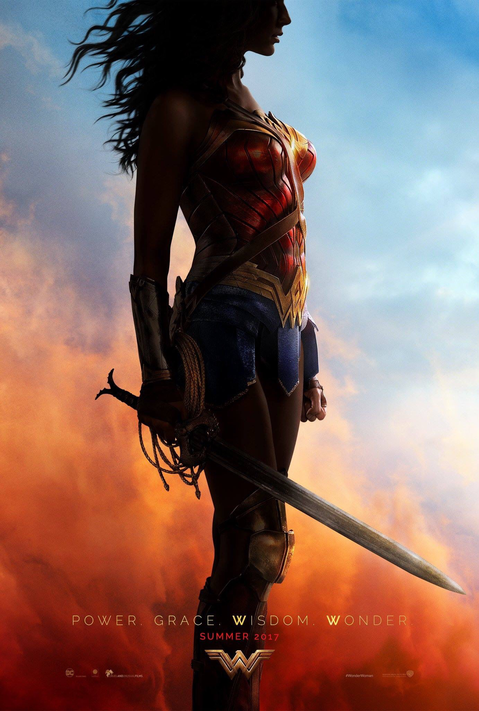 As does the Justice League trailer….

The Daily News will return in September. Or maybe August

We’ve already had Teachers and Those Who Can’t from TV Land and TruTV respectively, offering us just that, and now we have HBO’s efforts at the same, Vice Principals, in which Walton Goggins (Justified, The Shield, The Hateful Eight) and Danny McBride (Eastbound and Down, Tropic Thunder) are – yes, you guessed it – vice principals at the same US High School. Goggins is the sweet-talking but ultimately two-faced popular one; McBride is the foul-mouthed, inadequate dick that everyone hates; both hate each other.

Then the principal (Bill Murray – yes, Bill Murray) decides to stand down for the sake of his sick wife, prompting a contest between his deputies to replace him, only for both their dreams to be dashed as outsider Kimberly Hebert Gregory (Devious Maids) gets the top spot instead. My enemy’s enemy is my friend so McBride and Goggins unite to defeat their new opponent – but such is their ineptitude, all’s that likely is mutually assured destruction instead.

The show has several strands of (attempted) comedy. With McBride co-creating and writing, as per Eastbound and Down, it’s not surprise there’s his usual parade of attempted alpha male put-downs, extreme dickery and inappropriate teaching methods, here filtered through a more inadequate, more self-aware, less sports-obsessed prism than Kenny Powers. There’s also the childish squabbling between McBride and Goggins, and their frequently politically incorrect antagonism towards Gregory’s ‘smart, sassy black woman’ routine – which, subtly, is itself as manufactured as both McBride and Goggins’ facades.

But despite all those elements at play, Vice Principals isn’t hugely funny, except towards the end of this first episode when the two enemies unite, and largely feels like watered down Eastbound and Down. McBride’s ex-wife Busy Philipps (Cougar Town) doesn’t get to do much beyond be the butt of his ineptitude, while Shea Whigham as her new husband largely gets to play the unexpectedly nice guy that McBride doesn’t quite know how to deal with, without getting to cause any laughs himself.

An almost-interesting looking at failing masculinity and petty power struggles, Vice Principals might get better in its second episode when hostilities take off. The fact that it’s a definite two-season, 18-episode run means that it should have a fixed story arc that takes as long as it needs, no more, no less, which is another plus. At the moment, though, it feels like it needs work: must try harder.