The Daily News will return on Monday

A moderately interesting infographic for a change, involving a survey of 4,000 people in (both?) the US and UK to gauge their behaviours, habits and lifestyle choices surrounding the consumption of entertainment. Click on it to make it bigger 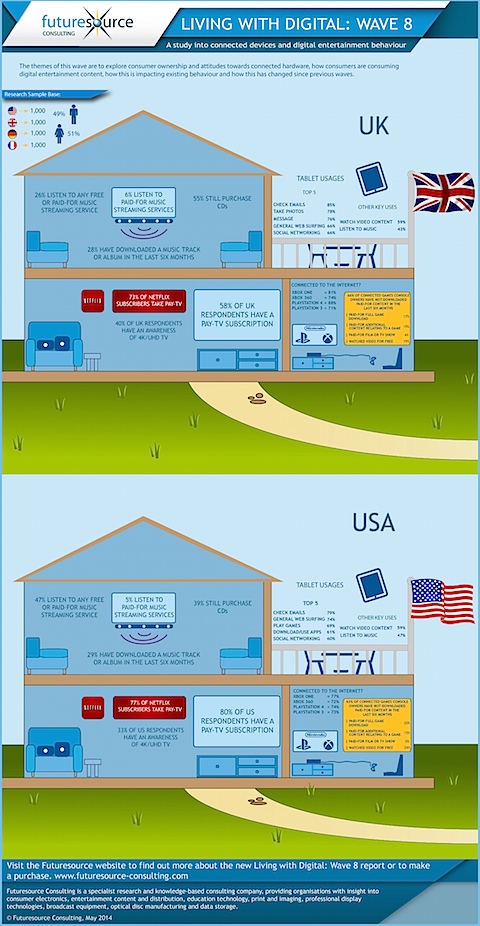 In the US: Sundays, 10pm ET/PT, Showtime
In the UK: Thursdays, 9pm, Sky Atlantic

Well, what a variable show we have in Penny Dreadful. The brainchild of John Logan and Sam Mendes, it sees an all-star cast (Timothy Dalton, Josh Hartnett, Eva Green, Billie Piper, Rory Kinnear, Helen McRory and Simon Russell Beale) in a Victorian setting that brings together all the great works of Victorian horror fiction into one big melange: Dracula, Frankenstein, Dorian Gray and possibly some others I haven’t spotted yet.

Except as much as Logan would like it to be a melange, it’s more a patchwork of different body parts sewn together, much like Frankenstein’s monster himself. Episode 1 tried to introduce as many characters as possible without revealing who they all were until the last minute – a strategy that might have worked if we hadn’t read the character list, read any of the books or knew what the show was about. Instead, apart from a show full of mysteries that weren’t mysteries, we had little beyond Logan frightfully pleased with himself for coming up with such a unique and novel concept that was absolutely in no way like The League of Extraordinary Gentlemen or anything similar that had gone before – oh no – and delighting in his use of language, while the cast decided to play it straight or camp it up in roughly equal measure.

Episode 2 then took a plummet in quality and was almost so bad I had to turn it off. But not quite. Principally an episode designed to introduce three missing actors – Billie Piper, Reeve Carney and Rory Kinnear – it took away the one interesting aspect of the pilot: the melange of the different Victorian stories. Instead, we had a vampire thread, a Frankenstein thread and a Dorian Gray thread. Eva Green’s performance was astonishing in the eponymous séance, despite being given a cringeworthy script to deal with, but it was Kinnear’s arrival that just about saved the episode. Unfortunately, Carney was desperately uncharismatic and his character gave no real impetus to the plot, Piper’s Belfast accent was nearly as nails on blackboard as the entire cast of Orphan Black’s, and the show felt so satisfied with itself for mining Victoria horror for its inspiration, it almost totally forget to do anything with it.

Episode 3 on the other hand was significantly better, despite being equally delineated, mainly thanks to roughly 50% of it being dedicated to Kinnear’s character (spoiler: Frankenstein’s first monster). While one could quibble (rather a lot) with the idea of someone teaching themselves English purely through reading books of classic literature (at least in the original book, Kinnear’s character got to hear people speak first), Logan’s love of language finally paid off now he had the superb Kinnear to deliver it appropriately. And in fact, all the scenes Logan gives to Kinnear are actually surprisingly touching.

Unfortunately, despite the liberties Logan’s taken with the original work, he’s decided to stick with one particular cliche (spoiler: the monster wants a bride) that together with the Dracula and Gray themes, effectively makes Penny Dreadful a series about monstrous men hunting after women for various sexual reasons, either as text or sub-text. And when Logan’s not showing off how much he like Shakespeare and Wordsworth, he’s just getting his characters to swear a lot in an effort to be shocking, which is neither big nor clever.

Although a slight hint at werewolfism/shamanism for Josh Hartnett’s character in the third episode actually makes him interesting, he’s saddled with cheery consumptive Billy Piper for most of his scenes; Piper’s saddled with having sex with everyone else and coughing up blood a lot; Green mostly just has to look either spooked or spooky, although that is at least preferable to those séance scenes; Dalton just growls a lot and runs around a lot; and Carney is about as convincing as the charismatic debauched Gray as Leonard from Big Bang Theory would be. We’ve not even seen Dracula.

So in essence, watch this show for Rory Kinnear, because he’s great. Everything else is just so much lit-appreciation onanism.

Rating: 3
Rob’s prediction: Might get a second season, but I wouldn’t bet money on it

It hasn’t escaped the notice of more or less any TV executive worldwide that TV audiences are getting older. Those damn kids are glued to this new fangled Internet, leaving TV behind to those who’ve been watching since they were kids and TV was this new fangled thing that was robbing cinema of its audiences.

As a result, TV for what I’ll charitably call the older generations is getting special consideration, particularly in the crime genre, which the old folks just love. Here in the UK, of course, we have BBC1’s New Tricks, starring a bevy of famous older actors from shows that were popular in the 70s and 80s. It’s now on its 11th series, and still bringing in between 7m and 10m viewers.

Australia’s ABC1 (which also airs New Tricks) is waking up to this potential as well, and for its latest effort, Old School, it’s deploying two of the world’s most famous older Antipodean actors: Sam Neill and Bryan Brown. Neill is a retired cop, Brown a crim who’s just got out of jail. They team up to find the man who shot Neill and ruined his career during Brown’s last job – and to find the loot that went missing afterwards.

Not entirely confident that cutting out an entire demographic from the potential audience is a good idea, ABC1 is ensuring that some young pretty people also feature in the cast list: Brown’s law student granddaughter (Hanna Mangan-Lawrence from Spartacus) whom Brown puts into the care of Mark Coles Smith (The Gods of Wheat Street) when things get a bit rough.

But this is still a double act between Neill and Brown, both of whom are playing this somewhat leisurely, let’s say. As with New Tricks, it’s a relatively slowly paced, amiable comedy-drama where nothing that wouldn’t have happened in an episode of Hawaii Five-O takes place. There aren’t any especially great lines and most of the action revolves around either Neill or Brown feeling old or discovering something that’s changed since he was a lad, such as this new fangled Internet.

Yet despite this and the almost The Persuaders!-esque title sequence, OId School is still a modern show, a series with definite story arcs and character development rather than an entirely episodic piece. There are surprises and mysteries that aren’t solved by the end of the first episode. The inevitable odd couple private detective format, with Neill using his police skills, Brown his criminal skills, is partly present but doesn’t pan out quite as you’d expect, with Neill dealing with shades of grey surprisingly well, Brown able to police sometimes as well as Neill.

While it’s nothing earth-shattering, Old School is enjoyable, has a good couple of leads, a good supporting cast and a strong enough plot that it’ll be worth sticking with for now – it’ll probably remind you a bit of The Rockford Files or something.