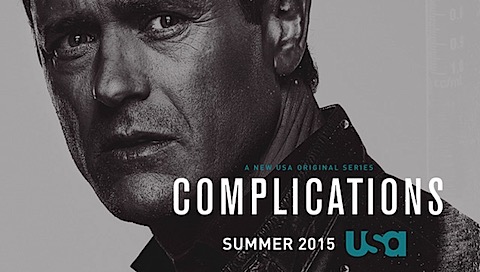 A lot of things can be learned from Matt Nix. Well, three at least. Nix, of course, is the creator of USA Network’s Burn Notice, for years the network’s most popular show. What lessons can we learn from him?

When Nix first pitched the idea of Burn Notice to USA, it was a dark misery-fest set in New York. Then USA said that maybe he should lighten the whole thing up a bit and set it in Miami. The result was a show that lasted for 111 episodes and a movie. However, I and many others gave up on the show after the fifth season because it had stopped innovating and had become a formulaic procedural.

Now we have Nix’s Complications, in which ER doctor Jason O’Mara shoots a gang member to save both his own life and that of his patient, the child of a gang member. Events then start spiralling out of control as he has to keep protecting and caring for the child or else the gang will kill him, his family, etc.

The show reads as what Nix might have made Burn Notice had he been left to his own devices. It’s dark and gritty, there’s almost no fun or engaging characters, and there’s mysteriously a procedural element to the show as well, with O’Mara having to deal with a ‘dark and gritty’ case of the week in each episode – domestic violence, foot amputation, etc, etc.

And it’s barely watchable. I sat through all 3-4 episodes (the first is a double-episode so your counting system might vary) wondering when it was going to get good. I sat through O’Mara doing all kinds of stupid things, able assisted in this by a somewhat criminal nurse Jessica Szohr. I sat through any number of scenes of poor old Beth Riesgraf (Leverage) having to play Generic Wife 3 – you know, the one who spends all her time nagging the husband, who can never tell her his deep dark secret, even if it means he might destroy his marriage?

But it never got good. Almost the show’s only redeeming feature is gang ‘fixer’ Chris Chalk (best known from The Newsroom but about to be a regular on Gotham as Lucius Fox), who quite rightly gets all the show’s good lines.

The show thinks it’s saying something. And if you watched the first episode, you might think it was going to say something, too, something interesting even – perhaps about what happens if a doctor ‘breaks bad’ or what it means for a doctor to ‘first, do no harm’, with O’Mara working through with psychiatrist Constance Zimmer (UnREAL) all the possible other permutations of medical morality and what happens when you introduce it to the real world. I’m sure over the course of the season, Complications is going to come back to all this at some point at least, but it doesn’t within the next two episodes to any appreciable degree.

Instead, all it does is show you semi-plausibly how to commit some really stupid instances of medical malpractice and get away with it. Even then, it does so in an utterly implausible framework and without any joy, excitement or attempts to engage the audience.

As I remarked earlier this year, USA has had such faith in the show that it’s effectively kept it in a box for a year. Now it’s dumping all the episodes as quickly as possible. I’d say that’s actually a pretty astute move on their part, since for a summer show, Complications is about as enjoyable as septicaemia contracted from some broken glass you stepped on on the beach.

Thursday’s “Elizabeth Hurley is a queen, Dan Stevens is a computer and Tom Hollander is Dylan Thomas” news

The news for Thursday 5th September 2013

A review of the TV, films and theatre I saw in the week ending Friday 18 September 2015