It was slightly hard to find Diana in Wonderland last week. While Lex Luthor was busily trying to get Batman to confess his true identity in Justice League #31, all she got to do was fly around a bit with Superman.

Flashing forward to after the ‘Superman: Doomed storyline’ to the events of Superman #32, Diana’s too busy with her family to show up:

So that means we’re going to have settle for future, alternative universe Wonder Woman over in Justice League Beyond #23, where she’s getting beaten up by Lord Superman… and her son, Zod. Oh well.

Justice League Beyond #23
Plot
After Wonder Woman and Lord Superman disabuse their son, Zod, of his notions about his parenthood, there’s a fight, although Wonder Woman refuses to take part against her son.

Which is probably a mistake, since Lord Superman has the Watchmen plan of killing her off to provide a cause for everyone on his home Earth to unify behind.

And when Batman plays back Lord Superman’s plan to the Justice Lords, they agree, too, and decide to sort out Lord Superman. 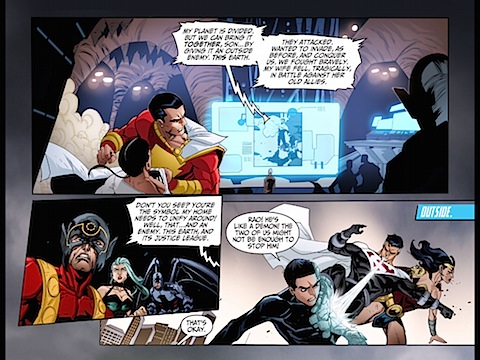 Unfortunately for them, Lord Superman has a magic anti-magic gun that stops superpowered things.

But then up pops Batman Beyond in Lord Batman’s anti-Lord Superman kryptonite suit to save the day.

That doesn’t work out that well, except then Superman decides that Lord Superman needs sorting out, although he won’t kill Superman.

However, Batman Beyond has a few ideas of his own.

Is it any good?
Not really. Being a bi-weekly title, clearly not as much thought has gone into either the plotting or the art as with a monthyl; equally, being an offshoot of a Batman title and with Wonder Woman a late arrival even to that, she’s more a guest star in Everyone Loves Batman (and Superman) than a character who’s had much consideration put into her.

So in this issue, as with the previous issue, we have Wonder Woman being easily beaten by Lord Superman, after a few punches. Worse than that, in that final “de-powering” scene, writer Christos Gage just forgets about her. She’s not in the crowd with the Justice Lords so doesn’t get shot by his magic anti-magic gun, yet when Superman and Lord Superman are slugging it out, she’s still nowhere to be found, despite clearly being able to turn Lord Superman into a mushy pulp without any effort at this point. As huge plot holes go, forgetting the most powerful woman on two worlds has clearly got to be quite a big one.

Leaving aside Diana for a minute, the characterisation of pretty much everyone is off and Lord Superman might as well be twirling a moustache at this point. Still, it’s 69p, so as always, we shouldn’t be going and expecting anything too amazing.