If toys are your thing, this week’s been great for Wonder Woman fans. You might, for example, already be booking tickets to see ‘The Art of the Brick: DC Super Heroes‘ on the South Bank in London, where you’ll be able to see a Lego Wonder Woman – and not the tiny mini-figure version, either.

Missed @NathanSawaya when he was last in the UK? Be sure not to miss his latest exhibition when he brings The Art Of The Brick: DC Super Heroes to London in March 2017. Tickets available now via the link in our bio.


If Lego’s not your thing, though, some of the toys being released by Mattel to accompany Wonder Woman have been revealed, too:

It’ll make a change from playing with your Malibu Barbie, at least.

After the jump, though, we’ll look at the latest DC Comics to feature our Diana: Wonder Woman #16 continues the story of Diana’s arrival in Man’s World, gives us a couple of new gods to admire and has our heroine dealing with a chimera; meanwhile, Batman ’66 Meets ‘Wonder Woman ’77 #6 sees our time-warped heroes dealing with a Griffin; and Justice League/Mighty Morphin’ Power Rangers #2 pits the Justice League against a team of ninja with giant robot dinosaurs – they’re the good guys, too, though. Surprise! 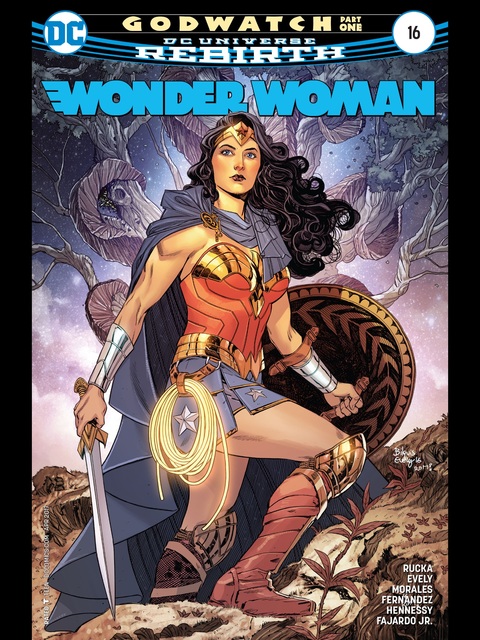 Wonder Woman (Rebirth) #16
Plot
Phobos and Deimos steal Veronica Cale’s daughter’s face then blackmail Cale into trying to steal the location of Themyscira from Wonder Woman’s mind. Unfortunately, it all goes a bit wrong causing the birth of… Doctor Cyber.

What does Diana do?
Many things, including rescue a boatload of refugees in the Mediterranean, foil a white supremacist plot in the Netherlands, visit some girl scouts, appear on TV with Barbara Minera and capture a chimera menacing a mall.

Later on, she saves a worker at the zoo that subsquently ends up housing said chimera:

Is it any good?
So lots to note. Firstly, Rucka’s storylines are definitely picking up in pace now and he’s making a concerted effort to make Diana more interesting, even if that seems more through plot than dialogue. But he’s also clearly setting up a whole roster of villains and villainesses for her to deal with, mostly by giving old adversaries a Rebirth make-over.

Veronica Cale is much as she always was, right down to her (familiar) critique of Diana as ‘that bubble-bused supermodel’ and her general preference for strife over love:

Knowing Greg Rucka, that’s probably we he brings in Phobos and Deimos as the gods of the piece – Fear and Dread, the sons of Ares and the nephews of Enyo/Eris (Strife) in the Homeric tradition, brothers of Strife in Perez’s run. As in mythology, Phobos and Deimos are twins here, but they’re a lot more pleasing looking than when they appeared in Perez’s run and they’re clearly also a different aesthetic from Cliff Chiang/the nu52’s gang of grotesques:

This is mostly the origin story for Doctor Cyber, though, whom we saw again last issue. While Cyber is currently a virtual assistant to Cale, in a head nod to old continuity, we briefly get a glimpse of her as a robot run telepathically by Cale’s best friend, who doesn’t come out of the encounter at all well:

As well as the theft of Cale Jr’s face…

…this is setting up the arch-villainess nicely to really dislike our Diana for all manner of reasons.

What does Diana do?
Chat with the Griffin. Fly a Robin.

Is it any good?
It’s quite a fun little piece that continues the storyline while giving both Batman and Wonder Woman characteristic things to do: Batman uses something from his utility belt to stop the cyclops while Wonder Woman befriends the griffin using her ability to talk to animals. And, of course, Robin turns out to have a bit of crush on Wondie.

Also nice to see that as per Volume 1, Wonder Woman ’77 can’t yet fly but instead can only glide on winds. It’s not till 1977 that she can fly properly, apparently…

Justice League/Mighty Morphin’ Power Rangers #2
Plot
The Justice League and the Rangers fight, only to discover that they’re on the same side. Meanwhile, Lord Zedd and Brainiac make friends.

What does Diana do?
Use her Lasso of Truth to reveal that the Power Rangers mean no harm and stop the fight.

Is it any goods?
It’s okay, probably a bit better than the last DC brands crossover, DC Universe v Masters of the Universe. What it does well at is playing up the humour and moderately satirising both brands.

The Justice League, particularly the Flash, are perplexed to discover that somewhat improbably, they’re facing off against multi-coloured ninja that drive giant robot dinosaurs. Meanwhile, Batman’s a butt of a lot of jokes, as the Power Rangers find it really, really hard to believe that a guy who dresses as a bat, never smiles and keeps trophies of his enemies in a cave is actually one of the good guys.

Even Lord Zedd gets in on the comedy, pointing out that he and Brainiac can probably co-exist quite well, since while he wants to rule the universe, Brainiac just wants to look after his bottle collection.

The issue is largely a slugfest, though, with the Flash getting most of the action, while Wonder Woman gets to use her Lasso off-page and speak just two lines. Not bad, but not the best ever entry of Diana into a comic book storyline by a long chalk.

All the scripted shows on Western, English-language TV that have not just featured Hellenism or Religio Romana but have actually shown them to be true in some way or other
[…]