It was slightly hard to find Diana in Wonderland last week. While Lex Luthor was busily trying to get Batman to confess his true identity in Justice League #31, all she got to do was fly around a bit with Superman.

Flashing forward to after the ‘Superman: Doomed storyline’ to the events of Superman #32, Diana’s too busy with her family to show up: 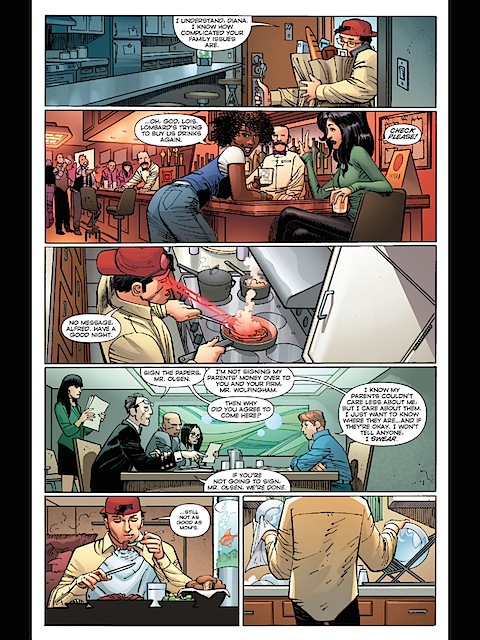 So that means we’re going to have settle for future, alternative universe Wonder Woman over in Justice League Beyond #23, where she’s getting beaten up by Lord Superman… and her son, Zod. Oh well.

END_OF_DOCUMENT_TOKEN_TO_BE_REPLACED

It’s time for our regular look at the TV that the BFI is showing, this time in August 2014. Given that summer holidays are approaching fast, it’s no surprise that there’s less on this month, but there is a season of director Moira Armstrong’s work, as well as an evening dedicated to the awesome The Phil Silvers Show – aka Bilko.

END_OF_DOCUMENT_TOKEN_TO_BE_REPLACED

The usual “TMINE recommends” page features links to reviews of all the shows I’ve ever recommended, and there’s also the Reviews A-Z, for when you want to check more or less anything I’ve reviewed ever. And if you want to know when any of these shows are on in your area, there’s Locate TV – they’ll even email you a weekly schedule.

The heat’s back on again, both in terms of the summer weather and the arrival of new shows, so I’ve not been able to get round to/force myself to watch FX’s Middle Eastern-yet-largely Caucasian dictator and familial rapist show, Tyrant. I’ll try to get round to that by Monday, assuming that all these Dulux swatches I’m keeping my eye on have lost enough moisture that I can compare them accurately. But I have reviewed two new shows:

One was better than the other.

I also managed to watch a couple of movies. Well, one and a half.

Belle (2013)
Jane Austen but with a black woman and slavery. Gugu Mbatha-Raw (Undercovers, Bonekickers (yikes), and Touch, but best known as Martha Jones’ sister Tish in Doctor Who) excels as the daughter of a slave whose aristocrat father places her with his uncle to look after – his uncle being the highest-ranked judge in England (Tom Wilkinson). Based on a true story, it’s a two-threaded piece, on the one hand examining the place of black and mixed race women in 18th century society, with Belle too high-born to eat with servants yet because of her skin too low-born to formally eat with her own family. She may have a £2,000 income a year, unlike her impoverished, equally-illegitimate white cousin, but that doesn’t mean anyone wants to marry her either. Contrasted with that is a case being examined by Wilkinson in which slaves are thrown overboard a ship and the ship’s captain tries to claim on the insurance for loss of cargo. The two threads mirror each other, with Wilkinson’s growing awareness of Belle’s station informing his opinion on the case and vice versa. The cast are fabulous, with Penelope Wilton, Miranda Richardson and Emily Watson shining, too, although Tom Felton (Murder in the First, but best known as Draco Malfoy in Harry Potter) is horribly typecast as an evil racist aristo. Some tear-jerking moments and a lovely romance, but a little too gently paced and in need of trimming in places.

Monuments Men (2013)
Another film based on a true story, this sees George Clooney, Matt Damon, John Goodman and others as somewhat past-it art experts at the end of World War 2 flying out to Europe to try to rescue whatever art they can before the Nazis steal it or destroy it – or the Allies bomb the hell out of it. That’s the first half-hour anyway, but we gave up after that because pretty much nothing much happens. There’s no good dialogue, the direction is limp, there’s no action, no scenes of note: there’s more excitement in a Pathé newsreel.

After the jump, a round-up of the regulars, with reviews of 24, Continuum, Enlisted, Halt and Catch Fire, Old School, Penny Dreadful, Suits and Undateable.

END_OF_DOCUMENT_TOKEN_TO_BE_REPLACED

I’ve always liked Andy Serkis. I remember him in what was pretty much his first role – a cycle courier on ITV kids drama Streetwise – even if the most YouTube can remember of that is the following ‘clip’, in which he plays the saxophone:

However, he’s now a big star in the movie world, having done motion capture roles in many films (he even runs his own motion capture company). His most famous role is as Gollum in the Lord of the Rings and Hobbit movies, but he’s also been King Kong and Caesar in the new Planet of the Apes movies. Here he shows Conan O’Brien how versatile he is: