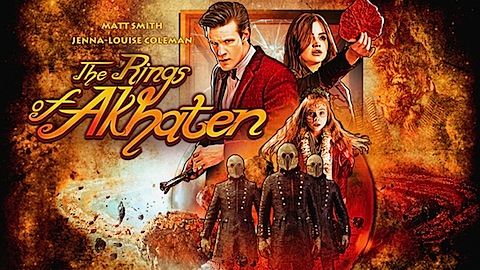 Once upon a time, Doctor Who was a different kind of show. It was a show that could wonder at being able to touch alien sand and hear the cries of strange birds wheeling in another sky. It could dedicate six episodes to a planet entirely inhabited by giant talking insects, each with their own cultures, or have a whole episode without the Doctor and companions, in which decidedly inhuman aliens discussed peace treaties and vegetation.

Then the show moved on. It became more of an action show, in which poetry and metaphor took a back seat to an action hero Doctor foiling aliens’ schemes.

Thank God. And if you don’t think that was a good idea, The Rings of Akhaten were an epic demonstrate of just how staggering boring just 45 minutes of little girls singing to false gods can be.

Plot
The Doctor takes Clara to the Festival of Offerings, but the Old God is waking and demands sacrifice!

Was it any good?
For about 20 minutes, it was really very good. And then it all fell apart as the singing began.

Former Spooks writer and the creator of Luther Neil Cross is clearly a Doctor Who fan. Even putting to one side the references to the Hartnell years (the Doctor talking about travelling with his granddaughter) and The Celestial Toymaker/Mind Robber/The Three Doctors (“I’ve travelled to universes where the laws of physics have been determined by madmen”), the whole story fits conceptually into the more experimental Hartnell years, while continuing the show’s atheistic philosophy from stories such as The Daemons and The Face of Evil, albeit somewhat softened since those the “White Heat of Technology” 1970s.

The story starts with a Father’s Day-style voyage into the past of new companion Clara, ostensibly to see if there’s anything special about this reincarnation of the twice-died woman. Interesting and emotional though that might have been, and also falling nicely into the current vogue for 80s nostalgia on TV, it’s also a set-up to explain that leaf the Doctor found in Clara’s book last week, and which will later come in handy this episode. All this was lovely.

Echoing but not really emulating The End of the World and The Beast Below, The Rings of Akhaten then sees the Doctor taking RoseAmyClara to a very alien world populated with the entire cast of the Star Wars Mos Eisley cantina. Not being a nerd, Clara fails to ask anyone for their autographs.

All this is very lovely and imaginative, from the naming of the alien races and the explanation of their cultures to little things like the use of emotionally precious things as currency. Quite why Clara can’t speak all the languages of these races, despite the TARDIS’s telepathic circuits, while the Doctor can, we don’t know, although given she concludes later on that the TARDIS doesn’t like her, maybe there’s a hint there of bigger things. Is Clara going to turn out to be a chameleon-arched Susan? Another impossible event like Jack? River Song’s daughter? We’ll see. Hopefully, the answer won’t be as incestuous as most of those suggestions.

Intriguingly, the Doctor just wanders off, leaving Clara to look around the place by herself, after which things start to go pear-shaped when she bumps into a not-very-alien-looking little girl, running away from her school performance. Turns out little girl does this to save the world from a new god or an old god or something, and she has to sing to do this.

To save the little girl, who’s still singing, the Doctor offers the god his memories to feed on, hoping they’ll be too much for the planet-sized beastie (seems unlikely, but hey ho). Clara, in turn, flying blind on a rocket cycle, decides to offer something a little more Sapphire and Steel-ish: the leaf that brought her parents together and all the potential memories associated with it. Which kills the beastie.

Clara now remembers the Doctor being at her mother’s funeral; Who knows what the Doctor still knows; and fingers-crossed that the destruction of the planet-sized old god hasn’t entirely destabilised the dynamics of the asteroid or even the seven-planet system where the inhabitants of the city the Doctor just visited live. Cos if it did, they’re all dead. Oops.

Clara Care Bear
All of which is actually very nu-Who, with the Care Bear-like power of love destroying the baddie and Clara’s parents actually being depicted in the show. And for once, there’s an emphasis on the mother, rather than the father in a story, with Clara more interested in her dead mum and her ring than her presumably live father.

Yet, despite all this goodness, which just about works on paper, the show in practice was just horrendous, once that little girl showed up. My gods, it was just soporific and toe-curling. Maybe it’s because I’m not the kind of person who can sit through even one episode of The Web Planet any more, let along six, that’s the problem. Maybe I just don’t have the tolerance for plotless musings on the nature of entirely made-up alien gods and paper-thin metaphors on the power of memory. Maybe an episode that seems entirely designed to play on people’s feelings and emotions rather than stimulate any part of the cerebral cortex involved with rational thought just ain’t my cup of tea any more. Or maybe it’s because it allowed Murray Gold to turn both the volume and his over-composing all the way up to 11.

Either way, I’d rather have watched all of The Sensorites than watch the middle-half of that story again.

CGI was fabulous, set design clearly paid for from whatever was left from the budget for CGI and the alien masks, looked creaky and very studio. Matt Smith, bless him, had cranked his engines up to 110% in an effort to keep this one moving, while Jenna-Louise Coleman again turned in a decent performance as Clara. She still doesn’t feel like a real person, more an intellectual problem to be solved, but that’s something that’s been true of all Stevie’s companions (Amy, River and even Rory).

But then they weren’t the problem…

Rating: If you didn’t watch it, don’t. You’ll regret it.

Next week, Mark Gatiss and a returning Who villain. Since I appear to have magic powers that immediately make TV shows the exact opposite of what my previous week’s reviews have said, I’m going to predict this is going to be absolute cobblers, just like virtually every other Mark Gatiss Doctor Who story (e.g. Victory of the Daleks, The Idiot’s Lantern) there’s ever been. There, should be great now. You can thank me next week.

The news for Tuesday 2nd October 2007