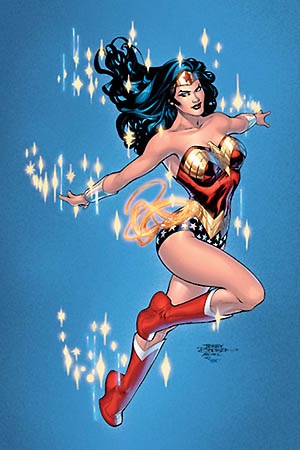 So what are we all thinking about the new version of the new version of Wonder Woman’s costume? As you may recall, after NBC released some official photos of the costume, as worn by Adrianne Palicki of Friday Night Lights fame in the pilot – which also stars Elizabeth Hurley, Cary Elwes and Jason Bruening of Knight Rider – there was a certain amount of feedback along the lines that it was terrible: plasticky, a bit porny and very impractical. More than that, some said it was unpatriotic, since it didn’t have the stars from the US flag on it, as per Wonder Woman’s original costume.

So NBC have retooled the costume slightly – here’s an after and before photo:

And here’s Adrianne Palicki wearing it in action:

Better? Worse? And given that the script by David E Kelley has Wonder Woman, the famous CEO of Themiscyra Industries, loving ice cream, Beyoncé’s ‘Single Ladies’, sleepovers and pining over lawyer Steve Trevor, could this get any worse anyway?

A review of Superman/Wonder Woman #4