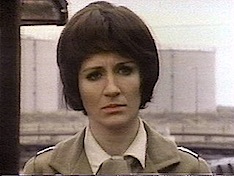 It’s the end, but the moment has been prepared for. We’re now at the last in our four-part series about the first Jon Pertwee Doctor Who companion, Liz Shaw – probably the best companion the show ever had. A Cambridge scientist with degrees in practically everything, she could have probably have saved the world all by herself: it’s just the Doctor had a few shortcuts that helped out.

Inferno was the only Liz Shaw story that didn’t follow the templates set by the old Quatermass serials, instead pioneering a whole new area of science fiction for Doctor Who – the parallel universe. Yes, if you thought nu-Who with its universe populated by Cybermen and Rose Tyler shagging a half-human Doctor was the first time we’d seen a parallel Earth on Doctor Who, you’d have been wrong.

So get ready not just for Liz Shaw’s Best Bits but also Section Leader Elizabeth Shaw’s Best Bits after the jump, where we’ll also answer the question: were the Doctor and Liz Shaw shagging?

Inferno
Inferno starts in traditional season 7 fashion with the Doctor doing experiments on his TARDIS console to see if he can get it to work again after he’d been exiled to Earth by the Time Lords. But thanks to UNIT and the Brigadier, who have called him in to oversee a project that’s going to drill through the Earth’s crust (hello Cold Blood and Hungry Earth again), he’s got access to a nuclear reactor full of power to help him.

So, in his usual lying, cheating manner, the Doctor steals power from the project and manages to get his console working – except it takes him to a parallel universe. There he finds the drilling project is nearly finished, thanks to the efficiency of the fascist government that now rules Britain. This Britain is populated by alternative versions of the people he knows, including the Brigadier and Liz Shaw.

Slowly, he manages to convince these alternative versions that he really is from another universe – which is handy because the alternative universe’s drilling project succeeds in penetrating the Earth’s crust and unleashes all manner of Hell. The Doctor manages to get access to power from this project’s nuclear reactor and returns to his own universe, just as the entire parallel Earth is destroyed in a fiery, lava disaster.

With his knowledge of the parallel Earth and what happens there, the slightly desperate Doctor – together with the real Liz Shaw – is able to stop the project and save the Earth.

What’s notable?
As well as the variance from the standard Quatermass template, we have the parallel universe idea explored for the first time on Who (although you could argue that The Space Museum‘s “jumping a time track” is the same, thematically). Although you might argue that it’s the overlong seven-episode format that’s the issue, we end up getting a whole lot of laborious explanation for the viewer about what a parallel universe is, and the Doctor seems very confused by the whole subject – amazed to see alternative versions of people he already knows.

The other notable variation is that this is the first time we really get a monster in season 7. Spearhead from Space gave us shop-window dummies and an octopus in a tank, for sure, but a standard Who monster is something that ambles around, waiting to be shot. Doctor Who and the Silurians gave us the Silurians, an intelligent race with politics and factions; The Ambassadors of Death gave us a fake out – some apparent monsters who turn out to be peaceful and really being used by human beings for their own ends. This is the first time we get ambling beasties, and bizarrely, they were never in the original scripts by Don Houghton, which were a more adult, hairy-beast free affair – they were added at the request of the new production team.

Indeed, the story shows some of the signs that changes were afoot at Who HQ. The Doctor in Inferno, while being his usual season 7 git of a self, is also more comedic and warmer than his usual austere and cold self. Jon Pertwee’s smirking a lot, as well. It’s notable that this is true only when Barry Letts, the new producer of the show is directing (episodes 3-7), following the hospitalisation of the original, superbly talented director Douglas Camfield.

Nevertheless, despite these precursors of the childishness that was to come, Inferno is still a largely adult affair. Much of the story involves internecine politics, with the project director Stahlman tussling with the Doctor, UNIT and the British government’s representative (Christopher Benjamin) for power over the drilling. There’s sabotage, a budding (but slightly shouty) love affair between Doug and Petra, two of the project’s workers, shoot-outs and fights. Pertwee’s Doctor demonstrates his Venusian aikido for the first time (or was that Martian karate? Or Venusian karate? Or Martian aikido? I’m sure he uses them all at one point).

Then there’s the parallel universe itself, which sees the dark sides of the Brigadier and Liz Shaw in a fascist Britain. In fact, dark is the perfect word to describe Inferno. The music is oppressive and eerie. For large chunks of the story, the world is in danger and is actually doomed – the drilling project succeeds in the alternate universe midway through the story and after that, it’s just of question of whether the Doctor will escape back home or not. And when the alternative world does end, we see all the alternative universe characters die horribly.

Liz Shaw
In contrast to Elizabeth Shaw and indeed her normal self, Liz Shaw doesn’t have much to do this story – in part because so much time is taken up with the parallel universe. True, she does save the world again. It’s Liz who correctly interprets the computer readouts to show that the project is in severe danger. When the drill does get into trouble, she’s the one who suggests the solution that saves the entire centre and the Earth (at least temporarily).

This is once again a companion who can conduct advanced scientific experiments, and master complicated machinery. Indeed, in this story it’s shown that she’s smart enough to understand the circuitry of the TARDIS and for the Doctor to trust her to do re-wiring and engineering on it. He even gives her a basic sonic screwdriver.

She also gets to demonstrate her wit and her assertiveness. She stands up to the Brigadier, defends the Doctor, and asserts her skills and indeed over-rules the Brigadier on matters medical.

But what’s more notable is what she doesn’t do. Once the Doctor’s gone, she almost seems to be pining for him. Liz is actually very sad, almost on the point of tears at times, and spends a lot of her time simply standing around aimlessly, hoping he’ll come back – and when she isn’t, she’s simply trying to get him back.

Given the Doctor’s caresses of her in The Ambassadors of Death when he finds her and the great big tender hug they share at the end of Inferno, you’d almost think they were shagging. Indeed, the Doctor and Liz’s hug is mirrored in the direction by Petra and Greg’s hug, which in their case at least signals the start of a relationship.

The End?
This is, of course, Liz’s final story. Caroline John’s contract wasn’t renewed after this because Barry Letts thought the character of Liz was too adult and they needed someone a bit less smart.

But, in the fifth of our four-part series, we’ll go into what happened next in greater detail.

There – bet you weren’t expecting that.

The best bits
In a slight break with tradition, we have our usual two-part collection of Liz Shaw’s Best Bits from the story, but then we have a one-part Elizabeth Shaw’s Best Bits as well, so you can compare and contrast.

Part 1 – In which she re-wires the TARDIS, does her sums, spots a problem with the drilling project, helps the Doctor with some experiments and tries to save him.

Part 2 – In which she pines for the Doctor, tends to his Time Lord medical needs, saves the drilling project, gives the Doctor a great big hug and argues with the Brigadier.

Elizabeth Shaw – In which she captures the Doctor, threatens him with a firing squad, saves his life, tortures him, interrogates him, mocks the Brigade Leader and then shoots him in the back, before being burned to death.

Review: Doctor Who – The Condemned

My review of I, Davros – Purity, the second part of a four-part Big Finish mini series looking at the early days of the Daleks’ creator, Davros.

Inside the St David’s Hotel

Inside the St David’s Hotel and Spa, courtesy of S4C’s Caerdydd