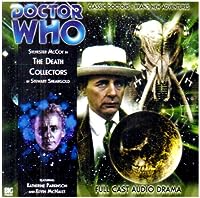 Casting’s a funny old game, isn’t it? You can ruin a production with it, or make it a triumph. You can make thousands flock to it, or send them running for the hills.

Take The Death Collectors for instance. It’s been sitting on my metaphorical shelf for the best path of a month now, glowering at me sinisterly. I say sinisterly purely because it’s a Sylvester McCoy story and I find them about as appealing as an emergency tracheotomy performed with a Pizza Hut knife and coke straw. This one doesn’t even have Hex (or, shudder, Ace) to make it slightly more appealing.

Oh, but what’s this? Katherine Parkinson is the guest star? The sort of red-headed one with the nice voice off The IT Crowd?

Ah. Now, I really think you should have made more of that Big Finish. Maybe written it in giant letters across the cover and relegated Sylvester McCoy to the small print perhaps?

Pass me my iPod…

Plot – The Death Collectors
‘There is only death.’

A virulent disease that killed millions. A missing scientist. An ancient race of salvagers who collect and preserve the dead. The quarantined planet Antikon connects them all.

When the Doctor arrives on a sky station above Antikon, a single accident has already set in motion a chain of events that will mean the death of every living thing.

And the only way he can stop it is to die. Again.

Plot – Spider’s Shadow
It is the eve of battle and the Martial Princesses Louise and Alison are hosting a royal ball. But there are unwelcome visitors in the garden and a sequence of events spiralling out of control. And what’s more, the Doctor doesn’t even remember arriving.

Are they any good?
So we have one of these new-fangled three-episode/one-episode double-headers here: two plays on one CD for the same price as a slightly longer play. Bargain? Erm… Actually, it’s quite good in one sense since you don’t get the massive padding you get on some plays. It’s all lean meat here.

I was musing on casting earlier. I’ll tell you why, since it wasn’t just random McCoy slagging. I get the distinct impression that the first play at least wasn’t written for him. Sitting there, imagining I was listening to someone – anyone – else, I started wondering what Peter Davison would have done with The Death Collectors. Then I wondered what Colin Baker would have done with it.

Then I realised this was a Colin Baker play in disguise. Just as you couldn’t have thrown a David Tennant script at William Hartnell and expected it to fly, here we have some very uncharacteristic dialogue coming out of McCoy’s ever-trilling mouth that would have made perfect sense from Colin Baker’s.

In fact, this is a pretty good play if you can pull off the trick of imagining it’s Colin Baker as the Doctor for its entire duration. The script itself is good. Although you can spot obvious influences such as Planet of Evil, it rattles along nicely and touches on a few good themes. We could have done without a not desperately convincing romantic sub-plot, but overall it’s not the bad, even if it is a little hard to follow. And it has a great ending,

What lets the side down are some of the performances and the sound design. Alastair Cording is a little too twirly moustached and Katarina Olsson is far more comedic as the ship’s computer than is acceptable. More to the point, the main aliens in this are almost incomprehensible thanks to some voice distortion work that renders most of their dialogue as though from a Frenchman on a language laboratory tape that’s 10 years old. What should have been quite claustrophobic and scary ends up just a bit daft – and Katherine Parkinson is being very restrained, only turning on her comedy charms when the script demands it.

The one-parter that concludes it, Spider’s Shadow, is another tricky timey-wimey piece that requires great concentration because it’s completely non-linear. It’s an enjoyable piece, too, and certainly more comprehensible than the first, and it, too, has some original plotting and concepts. Ruined by Sylvester McCoy, of course, and again feels like a C Baker story, but Kevin McNally’s great as the spiders and Katarina Olsson redeems herself in this one.

One of the better McCoy efforts, but easily skippable, even for collectors. Unless you like Katherine Parkinson, of course, you sensible person.

Available from Amazon.co.uk or the Big Finish web site.

Review: Doctor Who – Kingdom of Silver