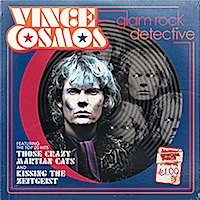 Paul Magrs is a very clever chap. He’s a lecturer in creative writing, and has written numerous books and audio plays. Not all of them are about Doctor Who, but quite a lot of them are. Indeed, he’s written a few Big Finish Doctor Who audio plays, including my favourite ever, the insanely clever Ringpullworld. He was even the author who managed to lure Tom Baker back to Doctor Who for a series of BBC audio plays, starting with The Hornets’ Nest.

Largely, if Magrs has a theme, it’s to deconstruct Doctor Who, not just as a show but how it’s written. Indeed, his most famous creation is Iris Wildthyme, a perpetually drunk, lying, sexually active Time Lady (the clue is in the name) with her own range of books from Obverse Books and a range of Big Finish audio plays that stars former Doctor Who companion Katy Manning. Iris, who travels the universe in a double-decker bus with a talking panda for a companion, originally started as a way to subvert Doctor Who, the Doctor and science-fiction conventions – she did what the Doctor doesn’t and that illuminated the nature of the Doctor in various ways.

All this is by way of introduction to Magrs’ latest creations, 70s glam rock star Vince Cosmos and his biggest fan Poppy Munday, who feature in a new series of audio plays from Bafflegab Productions, which is best known for producing The Scarifyers on BBC Radio 4 Extra. Starring Julian Rhind-Tutt of Green Wing, Hippies et al, Vince Cosmos: Glam Rock Detective is an origin story that sees Munday moving down to London from Sunderland and meeting her idol, Vince Cosmos… who for some reason seems to think the Martians are intent on invading the Earth. Is he mad? Will the Martians, if they exist be stopped? And will Munday manage to get her end away with Cosmos before the end of the play?

Plot
Why have sales of spray-on glitter gone up sevenhundredfold in one year?

Why has a one-time songster on the drab folk scene suddenly reincarnated himself as an ambisexual rock god hero who claims he has come to save the Earth?

Just what are those strange, multi-coloured lights in the sky? Can anyone say for certain?

It’s 1972 and Vince Cosmos is all the rage. He is the enigmatic Glam Rock star who sings about being an alien and whose followers worship him. Poppy Munday is the secretary of his fan club – Sunderland chapter – and all her dreams are about to come true when she finds herself drawn into the strange orbit of the Seventies’ most fabulous star.

But what if Vince Cosmos really is an alien? One engaged in a secret battle with aliens already on Earth?

Written by acclaimed novelist Paul Magrs (Never the Bride, Doctor Who), Vince Cosmos: Glam Rock Detective! is the first in a brand-new series of mysteries set in groovy 1970s London, and stars Julian Rhind-Tutt as the eponymous stack-heeled hero.

Is it any good?
Well, it’s fun, it’s clever, it’s got good production values, a good cast and a couple of surprisingly excellent homages to David Bowie’s Ziggy Starbust phase (especially the ultra-catchy ‘Those Crazy Martin Cats’). It’s also got one real head-turner in the second half. But ultimately, it’s still another deconstructive variant of Doctor Who, which you might find a bit wearing after a while.

For those of a Big Finish persuasion, it’s a combination of ‘Companion Chronicle’ and a ‘full cast production’, with Sunderland lass Poppy Munday (Lauren Kellegher) narrating the story of her trip down to London, her moving in with Trisha Wiley (Margaret Cabourn-Smith), her encounter with her creepy neighbour Mr Glister (Alex Lowe), and her eventual meeting with pop idol and lust object Vince Cosmos (Julian Rhind-Tutt).

Much of the story’s ambiguities play on and subvert your expectations, based on it similarities to Doctor Who and science fiction in general: Vince Cosmos claims to be an alien (just like the Doctor) and you expect that to turn out to be the case, because that’s the convention; the idea that Martians might be wanting to invade is ridiculous and you expect that to be the characters’ reactions, too; and the companion may lust after the Doctor but she never ever gets to shag him, does she? Sometimes the play goes with those expectations and sometimes it doesn’t. I won’t tell you which, but it does set up all those possibilities very well.

There’s also some wry nods to nostalgia and northernness: Munday’s mention of her ‘continental quilt’ and a somewhat inappropriate (now) but very accurate impression of Jimmy Savile hosting Top of the Pops most obviously come to mind, but there’s hat-tips to The Tomorrow People and Ace of Wands in there, too (both of which, in turn, were ITV’s answers to Doctor Who in the 70s).

But, as with a lot of the play, these are very much knowing acknowledgments. It feels a little bit like every line of dialogue and every scene is winking at the audience, as if to say, “Isn’t this clever? Remember that? Course you do.” It’s also quite obviously an origin story, waiting to set up an entire range of new stories, so doesn’t quite have the pace or the narrative closure you’d perhaps like.

All the same, it’s head and shoulders above Big Finish’s output (he writes, damning with faint praise) and it’s got a lot to commend it, so if you like Bowie, you like your sci-fi more in the Douglas Adams mould or you just like the rather excellent Julian Rhind-Tutt, give this first play a go, at least. Perhaps, like Iris Wildthyme, Vince Cosmos will outgrow his origins and become something more than a reflection of Doctor Who.

Review: Doctor Who – The Nowhere Place

A review of the Big Finish Doctor Who story The Nowhere Place, starring Colin Baker and Maggie Stables

Thursday’s “Bill and Ted… not!” news