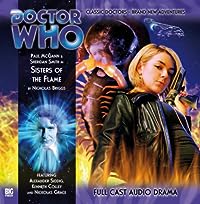 You always know you’re in safe hands with Nicholas Briggs. He’s been doing Doctor Who audio plays for 20 years or more – writing them, directing them, acting in them – so he’s pretty much got them down pat.

If he has an area of expertise, it’s the Doctor Who continuity piece. Above all other Big Finish writers, he’s the one most inclined to use an old enemy and reference continuity, all within the realms of a reasonably traditional story, albeit one unrestricted by special effects and design budget.

Guess whether Sisters of the Flame is a continuity fest (older fans may already spot the reference).

Plot
The richest man in the galaxy has just bought a backwards planet with no obvious mineral wealth in the outer reaches of the universe. An obscure mystical sect has been revived after centuries of neglect. A new race of aliens are hunting for prey. Why?

As the Doctor and Lucie attempt to discover the answer, it becomes clear that someone is attempting to resurrect the past – and they need a Time Lord to help them achieve it.

Is it any good?
Yes. It’s very good. Obviously, it’s a little hampered by the presence of increasingly whiney teenager Lucie Miller – is it just me, or is Sheridan Smith sounding less and less teenagery with every play? – and the choice to take advantage of audio by making every second character a twelve-foot tall centipede is perhaps a little misguided. Nikolas Grace is a touch hammy, as always, although his character isn’t exactly an exercise in subtlety; and Alexander Siddig chooses, once again, to play an alien as though it’s contemplating Every!… Single?… Word?!…

But it’s actually quite effective, and provides some suitably interesting concepts that should pay off in part two. The continuity references should give the patient fan a good few thrills. The plot hurtles along at a cracking pace. The dialogue is excellent and the cast seem to be having fun. Plus Siddig’s performance does sort of work in context, surprisingly.

Pretty good as Eighth Doctor and Lucie plays go, even if lacking any real depth. One to get, provided part two turns out to be good.

Another Doctor Who movie, but with Billie Piper?

The Daily Star reckons a Doctor Who movie is being planned.