I watch a lot of old tatt for you guys. I really do. Normally, I manage to sit through it all. Sometimes I can make it as far as five episodes into a piece of old rubbish before decreeing its awfulness, just to save you all from having to do the same.

The last time I couldn’t make it through an entire episode of something was Angela’s Eyes, almost exactly a year ago. I lasted less than a minute with that one.

I lasted 16 minutes of Saving Grace before I decided enough was enough and I couldn’t take any more. What was wrong with it?

It was offensive. It was really, really offensive.

END_OF_DOCUMENT_TOKEN_TO_BE_REPLACED 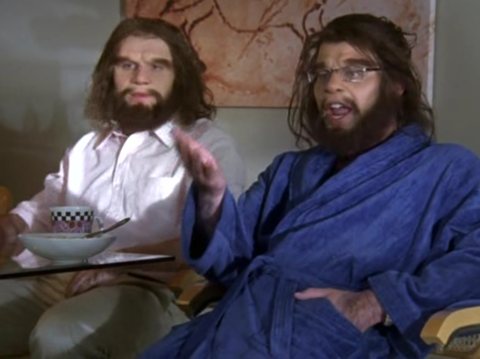 I’m in something of a quandary. Normally, I deploy The Carusometer after the third or fifth episode of a show has aired. But this pilot has now been shifted to fifth in the running order, with an all-new first episode being shot right now. So do I hand it over to The Carusometer now?

Anyway, there is a supposed truism that comedy allows society to examine taboo issues in a safer environment. Cavemen, based on an advert of all things, is supposed to be a more comfortable look at racism and stereotypes by featuring white people pretending to be cavemen, in the stead of ethnic minorities.

Yes, a show about racism that – unless I blinked or something – didn’t feature a single ethnic minority actor. How’s that for irony?

END_OF_DOCUMENT_TOKEN_TO_BE_REPLACED

Naughty Heath. Don’t be so mean to Maggie

In the US: Mondays, CBS. Starts September 24th

Newsflash! Guys who understand science are all nerds! They have no social skills and they have pathetic hobbies! They can’t talk to girls, either!

And blonde, cute women: they’re dumb! Dumb as posts! They’re into astrology and go for men with really big muscles and no personalities! They certainly don’t know anything about science or computers and look down on anyone that does! But they’re always warm and empathetic and never frightened by odd, stalker-like behaviour!

Welcome to the world of Chuck Lorre, creator of Two and a Half Men and The Big Bang Theory, CBS’s latest foray into the world of obvious comedy and relentless stereotypes.

END_OF_DOCUMENT_TOKEN_TO_BE_REPLACED

In the UK: Five/Five US. No air date yet

You’ve got to hand it to David Duchovny. Let’s face it, he’s not as young as he was. He’s not exactly decrepit – far from it – and time has treated him very well. But it’s not the early 90s and those calls for him to star in things like The X-Files and, more relevantly, The Red Shoe Diaries aren’t coming in as often as they used to.

Faced with that problem, what does he do? He exec produces his own show, in which he stars as an irresistible 40-something who spends every waking moment sleeping with women less than half his age. And a few others as well.