You’d never guess I wasn’t supposed to be working today, would you? Must. Work. Harder…

Out – The Complete Series – Special Edition [1978]
by Network

This’ll be popping up on the Action TV web site at some point, once they’ve got their server relocated:
Many people will only know of the late Tom Bell as the sexist DS Otley in Prime Suspect. But his acting career was wide and varied. Perhaps Bell’s finest hour was in Out in his BAFTA-winning lead role of Frank Ross, a former bank robber who tears up his old manor after eight years inside, trying to find out who put him behind bars.
Written by Trevor Preston, a contributor to Callan and previous Euston Films productions such as Special Branch, Out is firmly rooted in the revenge thriller genre, as well as the general Euston Films milieu. Like Walker in Point Blank and Carter in Get Carter, Ross is an iconic figure, a sharply dressed gangster who’s prepared to go to almost any lengths to find out who informed on him.
While the grittiness of those films lives on in these six episodes, it would be wrong to think of Out as simply a standard crime thriller. Taking the Krays and other real-life criminals as guidance, it explores the relationships that a career criminal might make with others, including his family, his friends, other criminals and the police, as well as the rules that bound societies like that together during the 60s and 70s.

END_OF_DOCUMENT_TOKEN_TO_BE_REPLACED

Ha ha! That was a load of old bollocks, wasn’t it? Admit it, all of you who sat around saying “I’ll reserve judgement until part two”: you now wish you’d got in last week and said it was bollocks then, just so you don’t look like a bunch of “Me, too!”-ers, don’t you?

END_OF_DOCUMENT_TOKEN_TO_BE_REPLACED 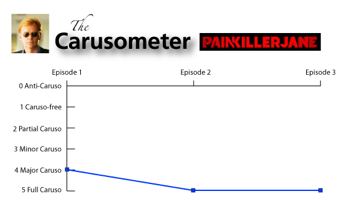 Oh the pain. If only there were some way to end it! Fortunately, there is. It’s called the off switch.

After three not terribly good episodes of Painkiller Jane, I’m throwing in the towel. It’s not without its charms: at its heart are some intriguing ideas; it feels at times like a 21st Century version of the rather good 80s show Max Headroom (the US sci-fi version, not the UK chat show); Kristanna Loken is?��Ǩ�� pretty; and it does look good.

But style can overcome only so much lack of substance. It’s appalling in execution. The writing is leaden and cliché d, with dialogue that makes you feel like you’ve got Ebola; there’s no real sense of place or time, so allusions to “Brad and Angelina” make absolutely no sense whatsoever in context; there’s no characterisation and even Jane only gets to be something more than a cipher because she does the ridiculous voiceovers; the plots are bizarre mishmashs of effortlessly poor detective investigations, action thrillers and homely moralising (the bad guys turn out to be lonely teenagers or well meaning little old men); and the actors are blessed with less talent than a computer-generated console game interstitial.

So The Medium Is Not Enough has great pleasure in declaring Painkiller Jane has scored a five or ‘Full Caruso’ on The Carusometer quality scale. A Full Caruso corresponds to “a show in which David Caruso might be responsible for every aspect of production. In an attempt to make the show futuristic, he will force the cast to wear sunglasses, even when it means they’ll fall over in the poorly lit sets he will insist on. He will also insist they end every sentence with the word ‘hip!’ because ‘People will talk different in the future’. All their shirts will be made from PVC.”

As usual, the NFT has a few nice TV treasures on display next month, as well as some excellent events. Here are the highlights, IMHO.

Jack Rosenthal’s bittersweet comedy about a teenage Jewish boy’s coming of age. Plus 15 minutes of clips from the strand.

A panel of writers, directors, producers and academics debate Play for Today and its impact. How did it work and what were its achievements? No idea who the panel are though.

Wednesday 23rd May: A Night With the Bonzos

TV appearances by the Bonzo Dog Doo-Dah Band, including Do Not Adjust Your Set and Son of the Exploding Sausage. May feature appearances by actual Bonzos.

Wednesday 23rd May: Coming to England

Floella Benjamin leads a discussion on the experiences of first-generation immigrants to the UK in the 50s and 60s. Includes a screening of Coming to England, the autobiographical account of her journey to the UK.

The Bonzos’ Viv Stanshall cycles around Muswell Hill, hunting records and attending to his terrapins.

Meet a man who resides in a small iron box, plus Bonzos cohort Bruce Lacey, who has a home-made robot-lady in his shed. Meanwhile, Ivor Cutler plays the harmonium and sings at the zoo.

Words like ‘weird’ and ‘odd’ do not do justice to this remarkable, eerily beautiful folk documentary recording the exploits of a strange, mysterious family living deep in the woods – according to their own rules – along with their giant steam engines, pump organs, broken-up buses, and all manner of outlandish regalia. Once seen, never forgotten!

The Mediatheque will be crammed with Play for Today stuff that you can view for free as well. Plus there’s film stuff at the NFT as well, apparently.