It’s been a while now since season two of Ozark came out but I’m only now putting fingers to keyboard to review it. That’s for a lot of reasons but one I share with a lot of people is that I didn’t love the first season. I gave it a whirl before I went on holiday last year; I watched the rest of it while I was on holiday and then reported back. It was fine. But like everyone else, I didn’t love it.

Normally, lukewarm but decent first seasons lead to much better second seasons as the showrunners learn what was good, what wasn’t, what worked and what didn’t and hone their creations. But as we saw a couple of weeks ago with Marvel’s Iron Fist, that’s not always the case.

And it’s not with Ozark. Spoilers ahoy for both seasons 1 and 2 after the jump.

The first season of Ozark was odd. It saw Jason Bateman effectively playing an evil version of Arrested Development‘s Michael Bluth. A Chicago accountant who only semi-accidentally ends up laundering money for a Mexican drug cartel, Bateman seems to have a happy and rich life, despite his wife (Laura Linney)’s infidelity. Then his partner turns out to have been skimming, which results in his speedy execution and the finger of accusation pointing in Bateman’s direction. Bateman only manages to save his and his family’s life by suggesting that Chicago is too heavily policed and that he could launder a whole lot more cash with minimal oversight if he moved to the Ozarks.

There, he has to frugally launder as much money as possible by investing in local businesses, such as the hotel run by Jordana Spiro (The Mob Doctor, My Boys) and a bar/strip club. And he has to do all of that without coming afoul of local criminals, including trailer trash Julia Garner (The Americans), redneck drug dealers Peter Mullan (The Fixer, Quarry) and Lisa Emery, or anyone who wants to steal his (literal) big pile of money. There’s also an FBI agent (Jason Butler Harner) in pursuit and incognito who reckons Bateman’s up to no good.

All of which played out like a sort of cross between The Accountant and The Martian. Bateman has to “accounts the shit” out of his situation, deploying all his financial know-how and cunning, as well as brinksmanship, to keep everyone off his back, keep his family alive and not fall afoul of the law. He also somehow manages to keep his marriage together, even when his loved ones find out who his real bosses are.

Ozark also was smart enough not to make its rednecks and trailer trash stupid. Everyone has depths and smarts that Bateman has to deal with simply by being smarter, rather than be lording his big city ways over them all.

Season two more or less throws all of that away in favour of making it more about politicking. Season one concluded with Bateman, Mullan, Emery and the cartel agreeing to build a casino together to launder their money; season two is then about the politics of getting that casino approved and built.

All of which basically relieves Bateman of his skillset, while giving political activist Linney a chance to shine. Bateman spends a lot of his story time going from meeting to meeting, doing his best to get things done. That hands the real fireworks of the storyline over to Linney, as she has to blackmail and cajole her away around the Ozarks, dealing in particular with local billionaire Darren Goldstein who holds the key to pretty much everything big in the state.

Along the way, just as Bateman rediscovers his conscience, she remembers why she went into politics – power – and begins to enjoy finally having some again, even over life and death in some cases.

Her journey is one of the high marks of a season that pushes women to the fore. Initially, most are on the outside and whenever they transgress, they’re punished. But as they learn the rules the men play by and play by them, too, they end up winning themselves.

Garner, who was one of the first season’s highlights, probably gets the most attention this time, not just in terms of storytelling but simply in terms of getting the good dialogue. Pretty much every episode has the writer delighting in some particularly fruity <expletive deleted> but her journey is more about discovering the Bateman makes for a better father figure than her own father (Low Winter Sun‘s Trevor Long), newly released from prison.

Then there’s new arrival Janet McTeer (Marvel’s Jessica Jones), who is the legal face of the cartel. She’s less threatening physically than predecessor Esai Morales but still manages to be lethally effective and to be able to butt heads with Bateman and Linney. 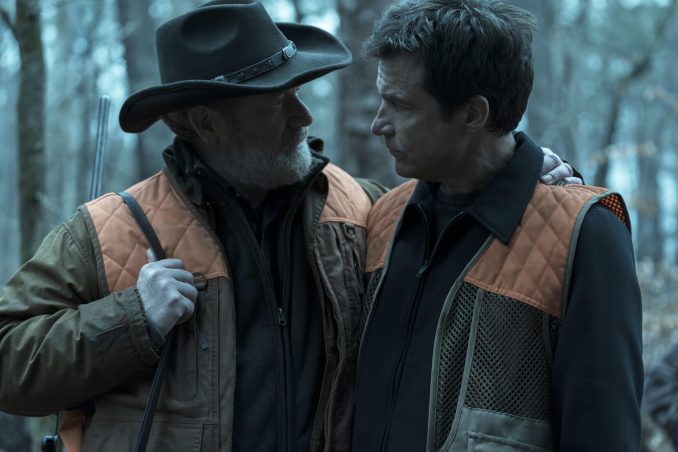 But a lot of the time, everyone feels out of character. True, it’s a show about how crime and merely trying to survive will change you and make you do things you never thought yourself capable of. But we have formerly peaceful vicars kidnapping and coming close to murdering people; Mullan’s almost a pussy cat in this season; and we have Buddy the racist old house guest (Harris Yulin) out on sprees with Linney. It doesn’t really ring true.

Similarly, a lot of the characters are sidelined. Bateman and Linney’s children largely just sit around and mope, in between setting up bank accounts, but very little of the storyline revolves around them rather than Garner.

On top of that, the moments from the first season where you saw things you hadn’t seen before are few and far between. A flashback to the 70s is the one truly memorable scene from a season that’s largely just people running around wondering why nothing goes according to plan and why there’s yet another party involved with new demands that are completely at odds with everyone else’s. Spiro has little to do, except Butler Harner’s bidding, and he spends most of his time being foiled and a foil, since his cover gets blown halfway through.

All of which means this season of Ozark is really just one long town planning meeting, without Kelsey Grammer‘s acting power to blast everything along. I can’t say it’s a shame because not only was season one not that great, season two’s not terrible, either. Indeed, it’s an overall zero sum game, with the pros of the second season outweighing the things we’ve lost from the first.

It just should have been better.

Will I watch the third season? Probably. But I don’t expect I’ll love that, either.