Sometimes, it can be a struggle trying to find something to say about a show. On the face of it, that shouldn’t be too hard with I Feel Bad. It’s produced by Amy Poehler. It’s an adaptation of Orli Auslander’s I Feel Bad: All Day. Every Day. About Everything all about how women spend all their time feeling bad about something, which should provide a bevvy of situations to work with. We have Sarayu Blue married to Paul Adelstein with two tweenie kids, who make her worry she’s a bad mother virtually all the time. She also has her guilt-inducing Indian parents Madhur Jaffrey (yes, the well known BBC cook) and Brian George (Seinfeld) contributing to the pressure.

Blue’s an artist at a video games company filled with 20-something tech bros, including James Buckley (The InBetweeners) and Johnny Pemberton (Son of Zorn), where she’s not only more or less the only woman, she also has to spend her days explaining feminism, being a surrogate mum to them and trying to stop them populating their games with unrealistic-looking women. 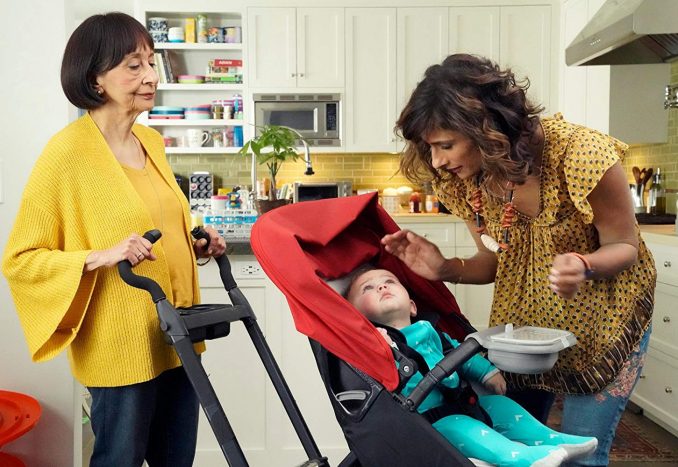 And yet… there’s not much to it. It’s basically a standard sitcom in which the heroine has to struggle with all the klutzes around her, as well as her own klutziness. There’s a few sprinkles of originality here and there: we obviously have a slight Indian dynamic, and it’s nice to have a sitcom not only based around an Indian character, but one who isn’t a doctor or a corner-shop owner. Some of those jokes work, such as when the parents have to move out of their home when work’s being done – Blue wants them to move in, Adelstein suggests a hotel, to which Blue replies (“Like white people? No way”). Some of them don’t, such as Jaffrey’s constant inappropriate dialogue, which simply feels inappropriate rather than transgressive.

There’s also the negotiation between being cool parents and wanting to protect the kids, which can often have a political commentary. The first episode sees the two parents trying to stop their daughter from joining a dance club at school, because the dancing appears to osexualised. It all escalates once the parents’ interference – with some help from Pemberton (“All you have to do is pretend to be religious and suddenly people start listening to you!”) – misfires and results in a boy joining the club and the dances getting worse. Should girls be free to express themselves or are they just too young and need to be told what to do?

Blue’s feminist discussions at work also serve as a decent enough commentary on patriarchy, particularly in the games industry, but only ever really become funny thanks to beardy woke character Zach Cherry having intersectional depths. Blue does of course have a zany best friend and the fact it’s Aisling Bea (whose gigs we’ve actually sought out in the UK) should have been a great thing. But Bea’s given so little to work with, I’d honestly forgotten she was in it until I reviewed the cast list again for this review.

On the whole, I Feel Bad isn’t awful. It’s a cut above average in terms of writing, has the occasional thing to say and the cast are pretty decent. But apart from its diversity, this is still an ordinary family sitcom that’s pretty ordinary and I doubt I’ll be watching any more of it. At the very least, what could I write more about it?