Yes, it’s Weekly Wonder Woman – keeping you up to date on pretty much anything involving DC Comics’ premier superheroine, including which universes she’s in

Justice League is out tonight, both here and the US. The predictions are it’s going to do good box office – it’s already been released in a few countries and international box office seems to be good so far, allegedly doing the best ever for a Hollywood movie in Brazil (really?) – even if pretty much every review says “it’s not great, but at least it’s not Batman v Superman bad”.

How much will #JusticeLeague make this weekend? pic.twitter.com/6HFg00gHZJ

TMINE will be seeing it tomorrow, so next week’s WWW will feature a full review – and will probably be on Wednesday.

Rumours have been swirling around that Brett Ratner – the world’s most average film director but also one of the financiers of Wonder Woman and also the subject of a lot of allegations of sexual abuse, sexual harassment, homophobia et al – has been shoved off future movies, including Wonder Woman 2, at the instigation of Gal Gadot, who would have refused to sign on the dotted line for any more movies were he involved. Warner Bros has since denied the story and Deadline says there was nothing to it. Still, here’s Gal Gadot sort of denying it but not.

Gadot has also discussed how Diana differs between movies, as well as being a role model and the loss of UN ambassador status. But still on a sexism roll, someone’s noticed that Justice League‘s costumes for its Amazons are somewhat different from those in Wonder Woman. Could having a male costumier on the former movie, a female costumier on the latter be the issue?

In case you wonder: Here's a picture of how the Amazons looked in Wonder Woman…next to pic how they look in Justice League. First designed by Lindy Hemming, second by Michael Wilkinson.

Still, several of the Amazons themselves seem to like the change, so maybe it’s not quite so clear cut.

Two weeks in a row we’ve had some TV news, which is quite remarkable. This week, DC’s Legends of Tomorrow made a brief visit to Themyscira.

A little bit before the Trojan War it would seem, but the DC Universe is not our universe, of course. It’s also not the DC Extended Universe, so don’t be expecting Gal Gadot’s Wonder Woman to show up on it any time soon now.

I should have probably saved that joke until next Thursday, shouldn’t I?

Cyborg is able to upgrade himself and release the Justice League, who beat up the alternative universe ‘metal Batmen’.

Get released. Punch a bit.

Diana doesn’t get to do much. Or say much. It’s mainly about Cyborg applying the lessons of American football to fighting interdimensional baddies from beyond time.

Superman, Wonder Woman, Zatanna et al are prisoners of Circe. Thankfully, Batman uses the power of SCIENCE™ – and the mini-Trinity – to save them.

Give her lasso to Superman to use, since apparently she’s not fast enough to use it herself (!).

Rescue Circe after Ra’s al Ghul dumps her in the Pandora Pit. 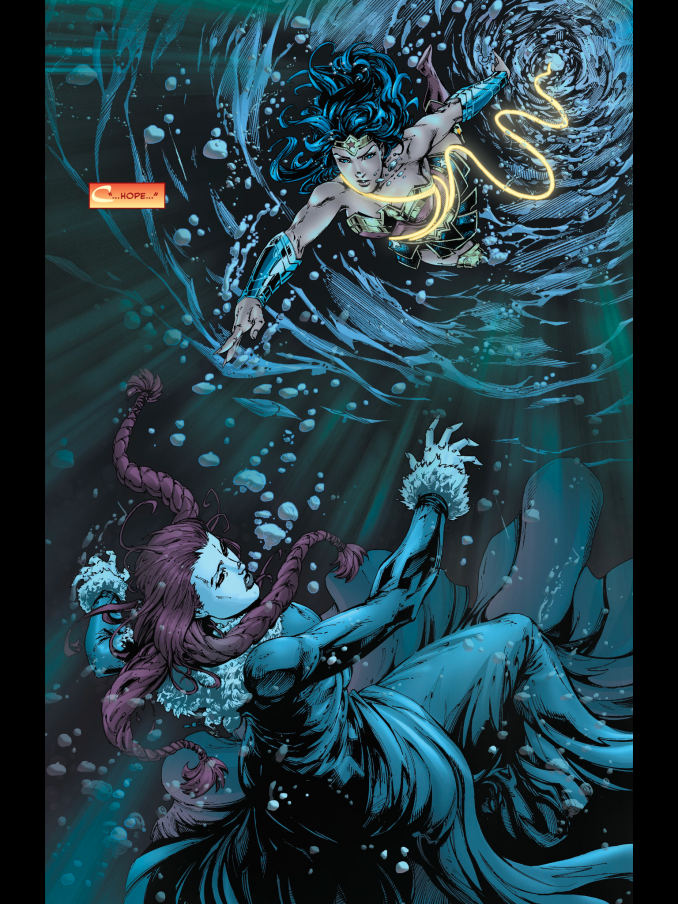 Nice to see the Lasso of Truth has returned to being infinitely extensible. Also good to see Diana saving Circe at the end and having a teeny tiny reunion with Artemis.

Otherwise, the entire storyline has been given a hugely wasted opportunity for virtually all the Trinities, with none of them (good or bad) being written very well, getting to do anything extremely cool or show off their unique skills. No super special John Constantine tricky plan? I’m disappointed.

Also, that SCIENCE™ made blood come out my ears.

Conan remembers when he and ‘Yanna’ were just kids together and Diana became his first love. Diana doesn’t. But they fight some crows and some sharks instead. Meanwhile, the Crow Witches are dischuffed that Diana and Conan aren’t fighting each other.

Mainly just fighting stuff, interspersed with Diana and Conan’s childhood love affair. But certainly a lot more enjoyable than and better for Diana than this week’s other titles, and the parallel version of Diana’s storyline does illuminate aspects of her canonical story.

Interesting that this is very definitely the current DC Rebirth Universe’s Diana who’s been brought to the Conan universe somehow and depowered. How that squares with her becoming a child and living through a parallel lifetime growing up amongst some parallel Amazons, we’ll have to wait to see, I guess.

A review of Wonder Woman #2

A review of Justice League: Doom
[…]

Yes, it’s Weekly Wonder Woman – keeping you up to date on pretty much anything involving DC Comics’ premier superheroine, including which of her relatives have died this week  The engines are revving on the […]