Perusing comics has been a vaguely odd experience in the past fortnight, since they’ve been full of ghosts. Not literal ones, but ghosts of nu52 past.

The Savage Dawn storyline that saw the death of the nu52 Superman was collected together as a graphic novel, and as I revealed back in July, as planned, it contained two previously unpublished issues of Superman-Wonder Woman. I haven’t bought it because although I’m dedicated to WWW, I’m not so dedicated I’m forking out £13.99 to buy a whole bunch of comics I (largely) already own. But the ‘Hell Yeah Superman-n-Wonder Woman’ Tumblr has published the missing issues, if you want to nip over there to read them.

Interestingly, the two issues are written by Brian Buccellato, rather than normal writer Peter Tomasi, and despite Buccellato largely being occupied with slugfest Injustice: Gods Among Us for the past five years, it’s actually a far better and more sympathetic bit of storytelling than Tomasi ever managed, using the five stages of grief to explore Diana’s feelings about her and Clark’s break-up, and to paper over some of the cracks and illogicality in Tomasi’s work.

It also gives her quite a few kick-arse moments, as well as leading into Greg Rucka’s future reunion of Diana with Steve Trevor:

…Oliver Platt and Connie Britton joined the cast of Professor Marston & The Wonder Woman and we got a set photo of Gal Gadot and Saïd Taghmaoui from the slightly larger budgeted Wonder Woman.

And a whole new cartoon series, Justice League Action, debuted on the Cartoon Network. Three short, 10-minute episodes have aired so far, Diana featuring in the first and the third, and voiced by Rachel Kimsey (The Young and the Restless, Days of Our Lives and a whole bunch of video games).

The ongoing story is that the Trinity™ are assembling a new Justice League and so are auditioning new members, including the likes of Firestorm; however, the first episode is more concerned with a fight between Wonder Woman, Superman and Parasite. Tonally, it’s similar to Batman: The Brave and the Bold, although Diana didn’t really get to do anything that funny except kick Parasite around a lot.

Notable that’s she wearing the now-universal Batman v Superman: Dawn of Justice costume, isn’t it? Everything’s getting harmonised for branding. Well, maybe not everything, judging by this forthcoming title for kids, Superpowers:

Just in case you were worried, some actual new comics for grown-ups were published, too. Most importantly, we saw the launch of a new comic, Batman 66 Meets Wonder Woman 77, which finally allowed the Adam West Batman and the Lynda Carter Wonder Woman to meet – although probably not in the way you were expecting.

And I did say the ghosts of the nu52 earlier. ‘The Lies’ story arc concludes in Wonder Woman (Rebirth) #11, giving us a few returning nu52 characters who might as well be ghosts. Meanwhile, after a delay of just four months, we’ve finally seen the final issue of Justice League of America published – the last nu52 comic to exit the doors of DC, just in time for the end of 2016. All of that after the jump.

Batman ’66 Meets Wonder Woman ’77
Plot
After Catwoman and Talia al Ghul try to steal a book from Wayne Manor, Batman remembers the time he and Alfred met ‘one of the greatest heroes’ the world has ever known.

Is it any good?
It’s surprising. It’s also fun.

One of the things people remember about Wonder Woman was its 70s, disco-esque campness. What many people forget is that just like the original comics, the first season was set during the Second World War.

Here, writers Marc Andreyko and Jeff Parker manage to not only find a way to give the Adam West Batman a flashback to his younger days but to do something Wonder Woman ’77 never did – revisit season 1 of Wonder Woman. West’s flashback is to a wartime fundraiser and sees Ra’s al Ghul and a young Talia al Ghul turn up to bid for the book that Catwoman was trying to steal:

Except as the result of a code being cracked, a familiar group of officers is also present:

…it’s up to a certain disguised yeoman to sort it out. Unfortunately for her, both Talia and Bruce are watching as she reveals her true identity:

Not having read any Batman ’66 issues except the first one, I can’t tell how much of this is taking in existing in-universe continuity. But the addition of Ra’s and Talia al Ghul to the Batman ’66 universe seems to fit the same pattern of Wonder Woman ’77, which assimilated comic book continuities into the the TV universe, creating a hybrid of styles that sometimes worked, sometimes didn’t. Here, Ra’s is very much like his early Neil Adams appearance filtered through the Batman ’66 prism.

So to are the Nazis. After all, they’ve snuck into the US during wartime yet conveniently happen to be wearing their uniforms at the auction – Wonder Woman would never have gone there and I suspect Wonder Woman ’77 wouldn’t have either. Batman ’66? I think so.

That camp combo works, though, it’s marvellous to get the season 1 Wonder Woman into the strip – complete with Etta Candy woo, woo-ing…

…and the childhood flashback with young Talia and Bruce is delightful.

What’s slightly less impressive is the artwork, which is relatively decent for matters battish, less decent for those associated with the Amazon princess, particularly Steve Trevor.

All the same, a good, intriguing debut marrying the best of the two comics, the two TV series and the general DC comic book universe. Worth sticking with for sure. 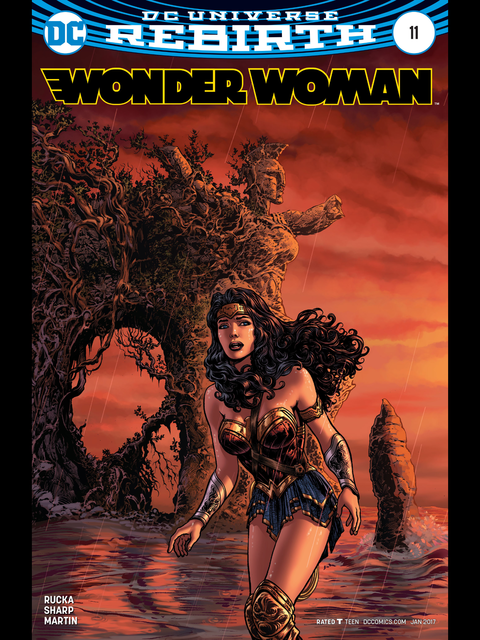 Wonder Woman (Rebirth) #11
Plot
Diana’s happy to be back with her nu52 mother and sisters, but Steve notices things are a bit different from when he was on the Themyscira the first time…

Is it any good?
It says it’s the end of ‘The Lies’ storyline. It’s not.

However, this is the point where the discrepancies between the two different storylines in the odd- and even-numbered issues come to a head. Steve remembers the utopian, Volume 2-esque Themyscira he encountered when he first arrived on the island, except none of the Amazons he knew then are here – these ones even speak English.

Meanwhile, Diana’s perfectly happy with the nu52 Amazons and mother who greet her, even if none of them seem to remember half the things that went on during Brian Azzarello or Meredith Finch’s runs:

Turns out the discrepancies might have something to do with that snake bite Diana got a decade ago when she investigated that evil tree. That evil tree is also the symbol of the Sear Group, which is probably run by Ares (anagram time). Ares might also be (or manipulating) Dr Veronica Cale, judging by the names of the dogs she’s just set on Etta Candy for trying to stop her stealing the remant of the Cheetah god.

So my money is on Ares being behind this weird duality of a seemingly fake nu52 and a seemingly true Volume 2. How and to what extent, I can’t guess at this point, since for everything nu52 to be an illusion – as some nu52 fans fear – would make zero sense, given how much Wonder Woman ultimately affected other titles, with the nu52 Donna still roaming around in Teen Titans, for example. I also doubt that Greg Rucka would really go to the bother of reading up the previous writers’ runs, simply so he can get rid of them with the next breath.

Is it any good?
It’s effectively Brian Hitch’s last hoorah for the nu52 and actually very nice. While the fight against Rao took a little longer than was really endurable for the reader, the conclusion, with (spoiler alert) , is unexpected and poignant. As is the actual ending. Because that’s clearly tacked on to take account of the death of the nu52.

I didn’t cover issue #9 when it came out in August, because I was on holiday, but the highlight was the aftermath of Superman having been killed by Rao at the end of issue #8. Diana spends most of issue #9 trying to save him, but after 15 minutes of CPR, even she’s ready to give up like the rest of the Justice League and admit he’s dead.

Issue #10 is then all about the fight between the League, Rao and Rao’s army of ancient Kryptonians, with Wonder Woman holding her own, of course, the rest of the Justice League doing likewise:

It’s a little love letter to the nu52 League, even the Batsuits. However, it’s the final page that’s as much about Hitch saying goodbye to the nu52 Superman and Justice League as it is about ending the story without it all seeming a bit pointless to have saved Superman in issue #9.

It’s a touching way to end what was one of the best, most action-packed, most character-oriented, most thoughtful of all the nu52 titles. It’s a shame to see both it and the nu52 go, since unlike Rebirth, they both aimed to tell new stories, rather than rehash old stories. Although recent claims have held that the nu52 was too grimdark and bereft of love, both Superman-Wonder Woman and Justice League of America showed that that wasn’t always true, at least. Certainly, these two issues have more emotion and depth of feeling in them than any of Greg Rucka’s Wonder Woman runs, and assuming our Greg doesn’t manage to change his spots, that’s something I will miss.