Last week, we got the news that there’s a young adult Wonder Woman book series on the way. Okay, technically that was announced in March, but now we have a cover.

Can’t say I entirely approve of the plot – “What Diana doesn’t know is that Alia is a Warbringer, a direct descendant of Helen of Troy, and she is fated to bring about bloodshed and misery” – but since I’m not going to be reading it, I’m not really sure I can complain.

Meanwhile, DC was busily trademarking “Lasso of Truth” for many purposes, including barbecues. Hmmm.

And in the war between Frank Cho and Greg Rucka, more shots were (almost) fired. Cho, best known for some dodgy superheroine artwork designed to wind people up, has been doing variant covers for Wonder Woman for some time. However, when a bit too much backside started to appear in his drawings, Rucka put his foot down and DC showed Cho the door.

Except on Friday, Cho claimed that he’d been approached by DC to write Wonder Woman once Rucka’s left.

He also made a few thinly veiled critiques of Rucka:

It’s not gonna be an origin story because I hate origin stories. Every single Wonder Woman book that you pick there’s a goddam origin story where nothing happens.

Except by Sunday, DC had denied everything. Sighs of relief all round.

And that was the news. After the jump, let’s talk about last week’s Wonder Woman (Rebirth), which, erm, continues Diana’s latest origin story.

Wonder Woman (Rebirth) #10
Plot
After receiving her powers from her patron gods and goddesses last issue, Diana begins to learn more about what she can do when a shopping mall she’s visiting is attacked.

Is it any good?
It’s both very cool and very perplexing.

As always these days, I have to prefix my comments with “Assuming what we’re seeing is true and not one of ‘the lies’ that Diana is trying to see through…” That done, it’s clear that Rucka is basically crumpling up the nu52 continuity and doing his own thing for now.

But in a very cool way. Following Diana’s introduction to the outside world, where she discovers that women dress very strangely and that she nevertheless can now make friends easily… 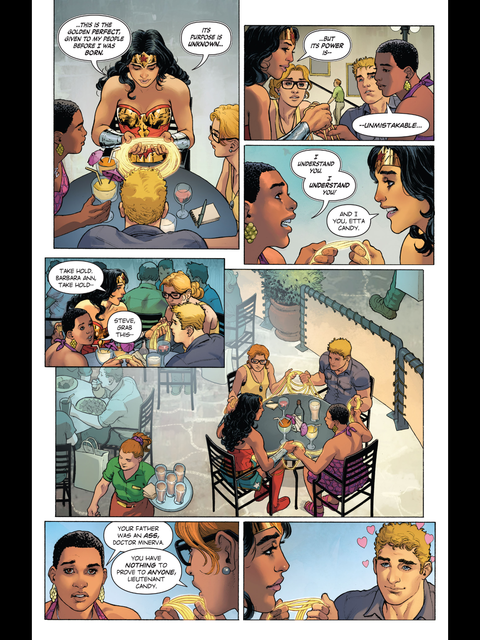 …we have a quick succession of Diana’s new superpowers demonstrated very nicely for us (and for her) during one long fight sequence.

We have super-speed – faster than a speeding bullet, of course:

Her hand can withstand the power of a grenade:

And not only can she fly, she can make Steve’s top come off: 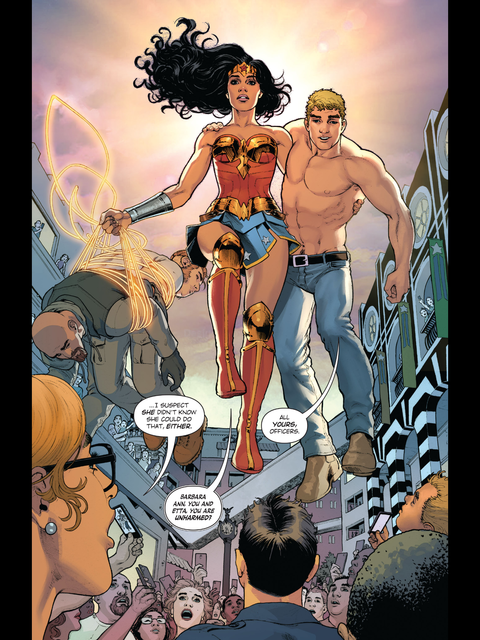 Which is all properly exciting and inspiring. None of it agrees with the nu52 continuity that preceded it, of course, but on its own terms, it’s cool.

It’s also worth noting a couple of other things. We have the first proper (AFAIK) identification of which branch of the military Steve and Etta belong to – they’re in the navy, which would presumably make Steve a SEAL.

The guys who started their fight in the mall? They’re ‘the Sear Group’. Nope, no idea, but they have a handy line in identifying tattoos.

All in all, putting to one side again the general confusion about whether this is supposed to be replace nu52 continuity or not, a properly fun, smart and exciting continuation of Diana’s story, beautifully illustrated, that adds numerous possibilities and could well be the best origin story for her so far.

Rucka’s showing that he’s got some good ideas about how to combine all preceding origin stories as well as improve on them – the naval touch makes sense and works better for the current US military configuration. Giving Diana the blessings of pretty much all the gods but only after the Contest, as well as making her precise powers something for her to discover for herself, opens up, rather than closes down the narrative.

Whether the ‘daughter of Zeus’ origin is going to survive is going to be interesting to watch, though, if only to see how Rucka manages to do it. Maybe next week…

A review of Justice League: Doom
[…]

Well, it was a bumper week for Wonder Woman. Wonder Women, to be exact. As well as her regular, slightly alternative universe title Sensation Comics Featuring Wonder Woman giving us a quick trip to the […]

Yes, it’s Weekly Wonder Woman – keeping you up to date on pretty much anything involving DC Comics’ premier superheroine, including which Agatha Christie detectives she meets It’s been a quiet-ish week for our Diana, […]