Last week being what it was in terms of my workload, particularly thanks to Netflix’s Marvel’s Luke Cage, I didn’t have time to do Weekly Wonder Woman last week, not even on Wonder Woman Wednesday. But WWW is back this week, albeit on another day dedicated to a god of war (Týr Tuesday, anyone?).

In terms of comics, not much got added to the pile last week – just issue #6 of Justice League (Rebirth), which started off a new storyline in which all the various superheroes and superheroines start off a bit frightened because they’re fighting fear:

Top art, as you can see…

Anyway, it’s mostly all about the two Green Lanterns, particularly Lady Lantern (NB not her real name) who asks the Flash out on a date. Except things don’t quite go as planned as maybe some of the fear they were fighting got stuck inside everyone…

Not much Diana in the issue, since she and Aquaman go off to have a chat about halfway through and aren’t seen again. 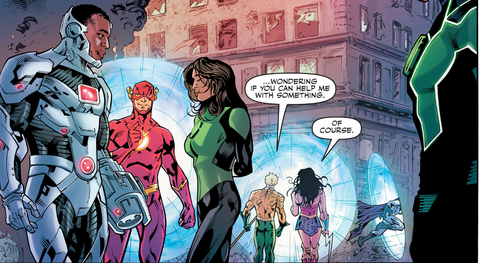 Ironically, in the real world, a lot more has been going on with our Wondy. Filming on Justice League has just finished in the UK and director Zack Snyder posted this behind-the-scenes video on the last day. You may recognised a certain superheroine.

On an obviously completely unrelated subject, current Wonder Woman writer Greg Rucka caused a bit of a stir not so long ago by declaring that Diana has always been bisexual, something that pleased current Batwoman author Marguerite Bennett no end, even though it’s not exactly new to anyone who’s been paying attention for the past few decades…

There’s also going to be a set of Wonder Woman and Steve Trevor statues based on next year’s movie:

But I’ve saved the best for last. There’s going to be a Snickers tie-in with Justice League. How psyched are you for that?

When you’ve finished digesting that news, after the jump is what we should have been looking at around this time last week: Wonder Woman (Rebirth) #3, #5 and #7. And although she didn’t figure in the most recent issues, we can use the time to play catch-up with Action Comics #960-962, which featured a certain Amazon princess/queen (exact current Rebirth status currently undetermined).

Wonder Woman #3, #5, #7
Plot
While Steve Trevor is off with the rest of his team in deepest, darkest Africa, Wonder Woman is hunting for her former friend turned enemy Barbara Minerva (aka Cheetah) in… deepest, darkest Africa. Wondy needs help from a fellow goddess to find out which of her memories are true and which are lies, and how she can get back to Paradise Island now her patron gods have stopped answering her.

Problem is that Cheetah gets her powers from a nasty misogynist African god (Urzkartaga) who’s getting a bit tired of flighty females and quite fancies using a man for his missions for a change. Do you want to have a guess whom he picks?

Is it any good?
It’s pretty standard Greg Rucka in and of itself, with our Wondy (who’s a feminist icon, doncha know?) not just rescuing some kidnapped women but fighting something that’s more or less the god of MRAs, with Steve Trevor being the literal SJW who helps her in her fight but whom the MRAs would like to make one of them. As a statement piece, it’s bold; but it does give us a Steve Trevor with an oddly feminist line in dialogue for a special forces soldier:

Maybe that’s what Diana saw in him or maybe she did a bit of consciousness-raising back in the day.

But then, Diana’s dialogue doesn’t sound very Diana-y either. Increasingly, it’s like the nu52 all over again, with Wonder Woman almost a separate title, with a continuity and tone separate from the rest of the DC Universe’s current titles as well as its predecessors. This time, though, it’s like the title has popped up through Convergence from a parallel Volume 2 universe; while the regular, sparky Diana continues doing her goddess of war routine, wielding Zeus’ thunderbolt and bringing wild boars to dinner parties in the rest of the Rebirth/nu52 universe, here Diane is as mature, stoic, reverential, not godly and subdued as she always was in Rucka’s Volume 2 run, except perhaps even duller.

Okay, that’s probably a little unfair, since Rucka does pepper the issues with the occasional bit of joyfulness, such as when Diana rescues Steve’s fellow soldiers, ones she appears to recognise from back in the day…

Also to be fair, the whole storyline has felt like a bubble within a bubble anyway, since it’s barely advanced that agenda of ‘sorting the truth from the lies’ that started in #1.

Nevertheless, not bad and plenty of good moments for Diana, Steve and even Cheetah, even if it’s all a bit too ‘subtext made text’ for my taste. And it’s about 1,000 times better than the Finches and 1,000 times less offensive than Brian Azzarello, at the very least.

Is it any good?
Well, it’s really just a big fight between Doomsday on one side and Superman and Wonder Woman on the other. But interspersed throughout are plenty of notable moments.

We have Wonder Woman saving Clark Kent (for there is a new Clark in town and he’s not Superman):

We have Wonder Woman saving Superman:

And then together, they save the day.

But largely, Diana’s left looking after both Lois and Superman/Lois’s son (Doomsday liking to hunt Kryptonians), while Superman does the fighting by himself.

Read in isolation (entirely legitimately, given DC’s skills at editorial co-ordination), this could be a super-textual comment on the nu52 Wonder Woman-Superman relationship not being right – they should never have been together. Taken with Trinity #1, it could also mean that this Lois and this Superman being together feels true. But you could swing both ways on this one perfectly validly.

Taken as a trio, the titles are a decent slant on old Superman’s rematch with the foe that killed him back in the day. They’re also mercifully short compared to the interminable ‘Superman Doomed’ storyline that so ruined the tail-end of Charles Soule’s Superman-Wonder Woman stint, as well as several other titles. It’s also nice to have Superman – any Superman – fighting side by side with Wonder Woman and for Lois Lane and Diana to be friends again. Just a shame that a touch of authorial fiat on the old school Superman/Wonder Woman relationship might have crept in there…