History is, of course, usually just that – ‘his story’. ‘Her story’ – women’s stories – tend to get overlooked.

Thankfully, great efforts are being made to redress the balance, to tell the forgotten stories of women throughout the world and throughout the centuries, to show what contributions they’ve made to society.

Unfortunately, much as it would probably like to be, The Astronaut Wives Club isn’t one of those efforts. The series is set during the early 1960s, when ‘women’s liberation’ was just beginning and the US and the USSR were racing each other to be the first to put a living creature then a man then a woman in space, before finally they both aimed for the ultimate prize of putting a man on the moon.

The US efforts began in earnest with the Mercury Seven, a group of seven astronauts who would fly the Mercury spacecraft into orbit, but only one of whom would be the first American into space. Each of these men was married and as an act of anti-Soviet propaganda and to get the American people on board with the ‘space race’, efforts were made to make these wives a form of American royalty, right down to a Time magazine journalist reporting on their every move – provided he only showed them and their husbands in a good, all-American light, of course.

Needless to say, beneath the surfaces of these supposedly happy, ordinary American wives, their happy, extraordinary American husbands and their marriages, a lot was going on, including infidelity and divorce, all of which these women and Time had to hide from sight.

Now, without these women doing what they did, these men might never have been able to have been astronauts – or at least be astronauts and have a family, normal home-life, etc. And many were accomplished in their own rights. So it’s good that their stories are told.

And they have been – in Lily Koppel’s book, The Astronaut Wives Club: A True Story. And to be honest, that’s where they should have been left, because a 10-part event television series they do not make – or if they do, the wrong people are telling them. 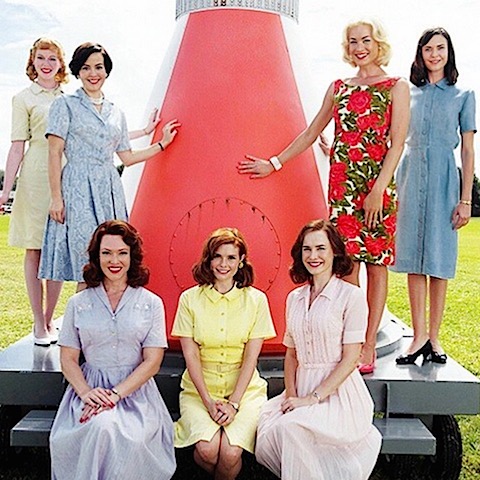 Then they realise that they each have secrets that could be revealed and that anything bad looks bad for their husbands, so they club together for solidarity, making cakes and so on. Annable’s Trudy Cooper is getting divorced and hates cheating men so she ends up manipulating events so that Dominique McElligott’s Louise Shepard can spot Alan Shepard cheating.

Except there’s also the fact they’re getting so much fame and celebrity that perhaps if they bent the rules, they might be the one who ends up a bit more famous than the rest, which is what Strahovski ends up doing, such as when she wears a dress that isn’t pastel-coloured in the photo above. Except maybe she’ll need the help of the others later on…

And so on. And I’m sure there’ll be more of that ‘women helping each other through adversity’ later, too, as well known historical tragedies will take place in future episodes.

But you’d be hard pressed to know what any of the women were actually like, what their own accomplishments were and so on, beyond the occasional throw-away line. In fact, you’ll end up knowing a whole lot more about all the members of the Mercury Seven than you did before, which is almost exactly the opposite of what The Astronaut Wives Club was trying to do.

So like ABC’s other 60s period piece, Pan-Am, before it, The Astronaut Wives Club is a pretty little bauble of a piece, full of decent actors and actresses and lovely attention to period detail, but with a plot that’ll send you to sleep despite all the excitement of its setting. Avoid.

Incidentally, it’s interesting don’t you think that despite supposedly being the most female-friendly of all the networks, ABC’s current Thursday night offering is this, followed by Mistresses. Not really demonstrating the full gamut of women’s experiences independent of men, is it?

The news for Friday 7th November 2008

Every House episode ever

Every episode of House summed up in a gif
[…]