It’s a slight change of pace for Wonder Woman this month. No, not a huge amount happens – certainly nothing like the cover depicts.

But rather than the quite grim and dark tales Brian Azzarello normally gives us, it’s a slightly lighter hearted tale he gives us this month.

Slightly. I mean there’s still cannibalism in it…

Plot
Strife’s up to something, something that involves a pin to be used somehow as a weapon against Wonder Woman. 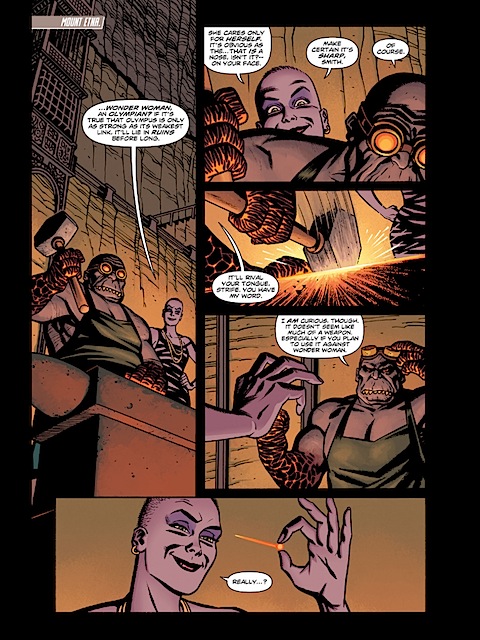 Meanwhile, back in London, Hera, Wondy and Zola are all discussing the nature of mortality and how it affects experience. Fascinating? Well, Hermes certainly seems to think so.

Orion, not aware of the odd sort of truce that exists between the baby-napping Hermes and the Wonder-crew, picks a comedic fight with Hermes but doesn’t come out of it well.

It’s Strife, rather than Wondy, who breaks up this particular bout. She appears to be in mourning for her dead brother, Ares.

She’s also brought presents for more or less everyone, including Wonder Woman. 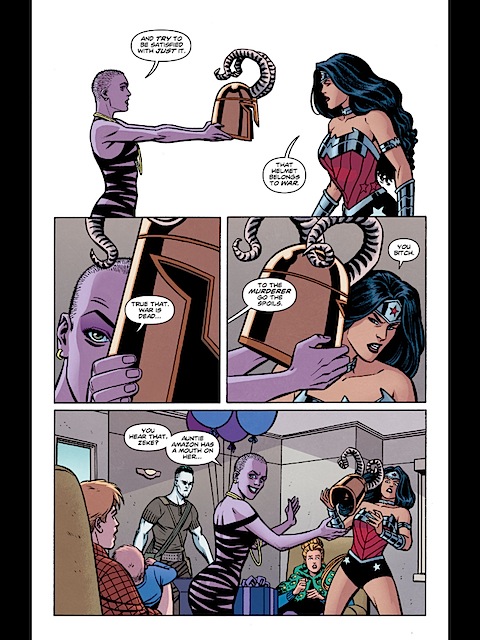 Meanwhile, Cassandra has been tormenting Milan in an effort to locate Zeke.

His and Wondy’s half-sister Sirocca alerts Diana to the problem, so Wondy heads off to rescue Milan, leaving Strife almost literally holding the baby. 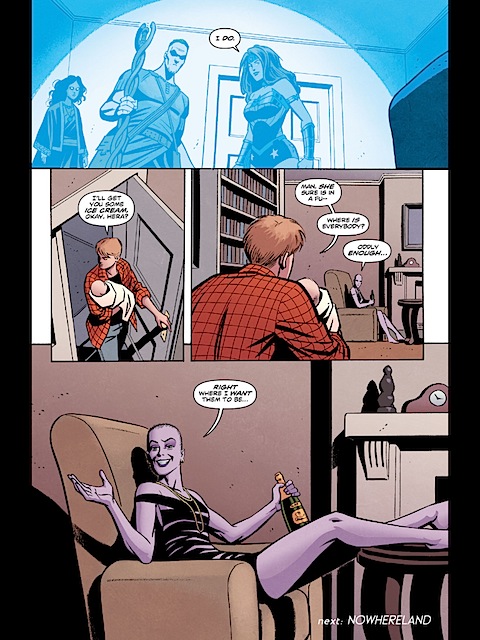 Is it any good?
Well, it’s nice to have a slightly different tone than normal and there is some actual action, with Hermes and Orion having a relatively fun couple of fights. And although, as usual, we’re always setting things up, rather than actually getting much pay-off, there are some decent images and concepts within that set-up. So it’s not bad as an issue, overall.

Problematically, though, Azz’s Wonder Woman is once again defined by two characteristics that lead to two others:

Here, all the action again revolves around the Wonder Team, particularly Hera and Strife. Rather than having a little Wondy-focused time after all the activity in the last issue*, the London discussions give us a Wonder Woman full of self-doubt about being a bit verbal with Hermes for having abducted Zola’s baby, followed by a Wonder Woman apologetic about not spending enough time focusing on the now-mortal Hera, who of course turned her mother into a statue and all her sisters into snakes.

Let’s hope all this niceness is something that’s between familial love and a desire to be on Hera’s good side when she becomes a goddess again, so she’ll return the Amazons to the normal forms (a possibility hinted at in a previous issue).

Nevertheless, by the end of the issue, Wonder Woman is not only inviting Strife into her own home, but leaving her in charge of the baby. That’s the same Strife who killed a lot of her sisters on Paradise Island, and while Hera may have reformed, there’s no sign of this in Strife.

But as usual, the characterisation and story that doesn’t involve Wonder Woman is actually quite fun. The squabbling between Hermes and Orion is nicely handled; Hera’s musings on mortality are an interesting angle, although not especially in keeping with myth; and you have to wonder what Cassandra is up to.

Speaking of myth, the Strife side of things nicely echoes her place in myth, notably the marriage of Peleus and Thetis. Cassandra’s loss of voice is also a nice nod to myth (different Cassandra, also). However, Brian’s reliance on picking – knowingly or unknowingly – what he regards as the cool bits of anything that’s remotely old and Greek and regarding them as myth and equally valid, without consideration of their meaning, gives us cannibal gods, with Dionysus cooking up bits of the First Born for Apollo.

For those that don’t know, the mystic group known as the ‘Orphics’, who believed they had specific knowledge of the afterlife and the gods handed down to them from the mythic Orpheus himself, were to conventional Greek religious belief what gnostics are/were to Christian belief. Although they did have an effect on mainstream belief and many of the religious Greek hymns that survive to this day are Orphic, the group believed in everything from different gods and a different cosmology through to different beliefs about the nature of the gods and relationship with mortals.

In particular, the Orphic gods were not especially averse to cannibalism: this particular scene is (probably) an homage to the Orphic myth of Dionysus/Zagreus, in which the Titans tore up Dionysus and ate him (there’s also potentially a nod to the myth of Prometheus and the eagle eating his liver, for it to grow back).

However, the Olympic gods in mainstream Greek religion were utterly against cannibalism or even the eating of mortals, as with the myth of Tantalus and Pelops. And even though Dionysus was prone to doing the occasional nasty thing (cf The Bacchae), it’s totally out of keeping with his ‘Nietzschean opposite’, Apollo.

As usual (a phrase I’m using a lot, I know) with Brian, the more he tries to do myth, the further he gets away. But in its own right and within the bizarre version of Greek myth that is the DC Universe’s interpretation, its an intriguing and memorable scene.

On the whole, an issue that points the story in potentially new directions and even action, and with the elements of comedy on display, there’s even a possibility of a new tone for the title, which would be welcomed, too.

Art-wise, Goran Sudžuka is now getting very close to Cliff Chiang in style, but I have to wonder: what’s Chiang up to at the moment? It seems like ages since he last did an issue. Here’s hoping he’s back soon.

* For anything personal about Wonder Woman, you need to read Superman/Wonder Woman –

The evolution of female action heroes

The evolution of female action heroes

A review of the first issue of Superman/Wonder Woman
[…]

A review of the first season of Netflix’s Jessica Jones
[…]