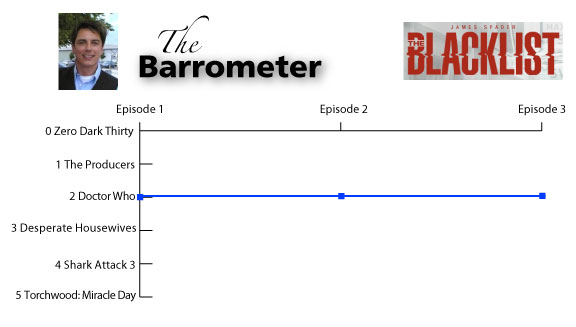 We’re now three episodes into The Blacklist, NBC’s White Castle version of Hannibal‘s fine dining experience, in which master criminal James Spader turns himself in and agrees to help the US government find other master criminals, provided he gets to work with an FBI novice (Megan Boone) for no well defined reason.

And after a pretty good start, the show has continued to stay more or less exactly the same. Since the first episode, we’ve had a few new arrivals in the cast, although only CIA agent Parminder Nagra (ER, Bend It Like Beckham) ever gets anything to do – or say – and doesn’t have any especially well identified personality traits beyond her plot function. But then neither do most of the main cast, since this is all about Spader.

Indeed, Spader is there as before, mildly hamming around the place, running rings around the FBi with some devious scheme that isn’t yet clear. Boone continues to exhibit all the charisma and inner strength of candy floss, while trying to work out if her husband is some kind of secret agent or master criminal sent to spy on her. The baddies of the week are mildly interesting, more for their casting (Chin Han and (spoiler alert) Isabella Rossellini) than because there’s that much to them as characters, although they generally represent some form of popular evil whose taking down by the forces of law and order we can only applaud. There’s also some reasonably good fight scenes and stunts to enjoy each episode.

This is fun, escapist entertainment. It makes almost no sense. But it hits all the right buttons, Spader’s great, and there’s a real sense of intrigue trying to work out what Spader is really up to. It’s not I, Claudius in the scheme of things, but it’s one of the top shows of the Fall season so far and there are worse ways to spend an hour.

Barrometer rating: 2
Rob’s prediction: Providing it doesn’t hold off giving away its secrets for too long, this one could run and run.

Some of the first pictures of Mads Mikkelsen in Hannibal

What have you been watching? Including Rules For Living, True Detective, The Last Ship and Suits