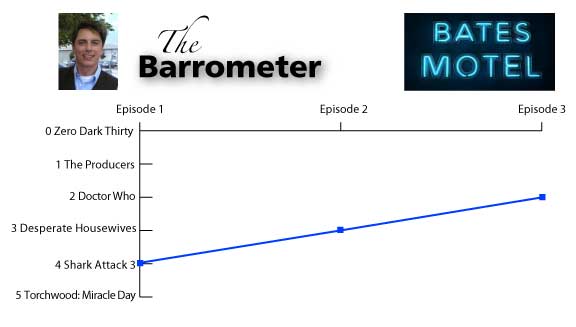 Bates Motel is a salutary lesson in how The Carusometer and The Barrometer are vital tools in measuring a show’s worth. The simple fact is that the first episode of seemingly every new show these days is unrepresentative of how it’s going to turn out in later episodes.

The problem with the first episode of Bates Motel, ostensibly a prequel to Psycho but bizarrely set in the modern day instead, was there was actually very little to it beyond the trappings of the original movie: yes, the Bates Motel is there, Norman’s there, his mother’s there and there’s a murder in the motel. But that’s about it. Beyond a liking for some dodgy manga, there’s no sign of Norman’s incipient insanity and problems with women – in fact, implausibly for such a nerd with an over-protective mother, not one but two women are now interested in him. It’s Psycho without a psycho, livened up with a bit of violence.

Since then, the show has metamorphosed into something completely different. The second episode introduced us not only to Norman’s estranged brother, but also an unexpected mystery element for the show: what secret do the townsfolk have? Where do they get all their money from, despite largely making organic artisanal cheeses? Together with his cystic-fibrosis afflicted British gal pal from Manchester (Olivia Cooke from The Secret of Crickley Hall, nevertheless putting on a US accent, presumably because Norman himself, played by fellow Brit Freddie Highmore, is faking a US accent, too), Norman goes off investigating using the manga he’s found – which might actually tell a true story – and discovers more than he bargains for. That takes off even further in the third episode, as they heroically try to find the abducted girls depicted in the book.

On top of that, episode three gives us a mysterious illness for Norman, after which he starts to have bizarre hallucinations in which his (still living) mother gives him somewhat homicidal advice. Whether the illness caused the hallucinations or whether they’ve always been there, we’ve yet to see. The producers are also giving Vera Farmiga more of the look of a Hitchcockian blonde, just for laughs, and have dialled down the violence against women, which can only be a good thing. The relationship between Norman and his mother is becoming as unpleasantly flirtatious and close as you’d expect, too.

It’s still not a brilliant show. It’s certainly weird and has a decent cast. It can be creepy, too. It’s now well on its way to becoming a prequel to Psycho, rather than something that takes the name and little else. The tension of whether the crime committed in the first episode will get exposed does add a little extra frisson to things, too, and the character relationships are more involving than you might think, even if Norman does end up being a bit of a dick a lot. And then there’s now the question of whether anything we see can be trusted because it might all be an hallucination (although Perception does that a lot better).

But because this is a prequel to Psycho and so there are few surprises in where the show’s ultimate destination is, to string the plot out, the show has largely had to become something else completely unrelated and highly implausible. What’s being exposed isn’t that enticing and because the show is essentially about a psycho who does bad things to women thanks to schizophrenia, multiple personality disorder or some other mental health problem, the show has a central misogyny to navigate, something that it doesn’t manage without being partially voyeuristic itself.

All the same, it’s definitely improving so I’ll keep my eye on it in case the upward tick in quality continues.