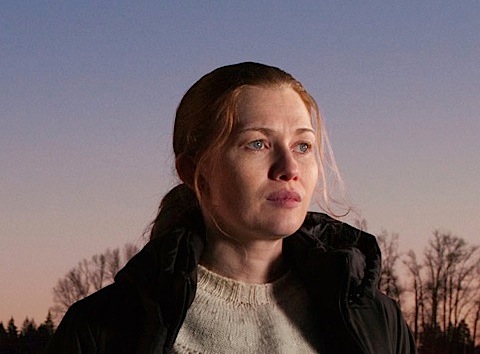 See? Easy mistake to make. They even have similar sweaters.

That’s not all. You see, it seems a vast batch of carbon paper has been sent over to the US (and Canada) of late. You may recall my complaining that the US-Canadian remake of Being Human, in which a vampire, a werewolf and a ghost houseshare, was practically identical to the British original. Well, in comparison, this remake of the Danish version of The Killing makes the Being Human remake look like it was really about five talking rabbits in sombreros on a cycling tour of Kenya, because we have here something that, bar the fact it’s in English and there have been a few, very slight name changes and alterations to dialogue, is a frame-for-frame, note-by-note remake of the original – because they even use the same music. Yet, somehow, it’s not quite as good. Good, just not quite as good.

Plot
AMC has begun production on the network’s next original series, The Killing. From writer, executive producer and series showrunner Veena Sud (Cold Case), The Killing is based on the wildly successful Danish television series Forbrydelsen and tells the story of the murder of a young girl in Seattle and the subsequent police investigation. Season one will consist of thirteen one-hour episodes and will debut with a 2 hour premiere on Sun., Apr. 3 at 9PM | 8C.

The Killing ties together three distinct stories around a single murder including the detectives assigned to the case, the victim’s grieving family, and the suspects. Set in Seattle, the story also explores local politics as it follows politicians connected to the case. As the series unfolds, it becomes clear that there are no accidents; everyone has a secret, and while the characters think they’ve moved on, their past isn’t done with them.

Is it any good?
Somehow, despite the fact that it’s basically a straight remake in the same vein as Gus Van Sant’s remake of Psycho, this is a slightly less taut, slightly stupider version of exactly the same story. As with Forbrydelsen, a girl goes missing, the police investigate, it turns out she’s been murdered and they slowly (very slowly in fact, since each episode is a day of the investigation) try to piece together whodunnit and how it might relate to an ambitious local politician.

Lead investigator here is Sarah Linden, who rather than moving to Sweden, is now moving to San Francisco to get married to her boyfriend, Callum Keith Rennie (nothing says “filmed in Canada” like Callum Keith Rennie). That’s not the only difference: the detective who’s replacing her kind of respects her, since he’s a narcotics cop and new to homicide, although he has a few tricks of his own that he can bring to bear. He’s not as big a tool as his Danish predecessor and the script here tries to add a little more background to both him and Linden – the closed-off Lund is a far more open creature here – although he’s very creepy at times when it comes to how he talks about and to girls.

But these little bits of additional backstory, while they add more to the characters, have the effect of making everything a little bit stupider and more spell out, as well as slowing everything down. Mireille Enos does deliver an excellent performance, but compared to Sofie Gråbøl’s earthy, strong performance, she feels a bit more ethereal, less present, and that results in a story with less impact. Indeed, without wishing to stereotype, the earthiness of all the Danish characters has been replaced with slicker, less grounded people, whether it’s in the police, on the political side or among the schoolkids, the exceptions being Michelle Forbes and Brent Sexton as the missing girl’s parents.

There have been a few additions that work well, too. For all the talk about immigrants in the Danish original, there wasn’t a huge bundle of multi-culturalism, whereas Vancouver’s cosmopolitanism provides a much more varied feel to the show. Richmond, the show’s suspicious politician, has a slimey advisor who doesn’t just disappear into the background like the Danish one did, which is a nice touch.

On its own terms, this is many ways a welcome alternative to the likes of CSI and Law & Order, in which crimes get solved in a single episode using magical miracles of insight and science. US TV has never really had a female detective whom everyone accepts, wanders around in practical clothing not looking hot, and who actually uses her brain to get things done, all while trying to bring up her a son, so the show should get a round of applause on that score alone. The story itself is as engrossing as the original.

But it has two main troubles:

While AMC shows do tend to be slow, that’s what killed off the excellent Rubicon in the end. People tend to expect crime shows to be a little faster paced than this.

So I might stick with this, just to see if it starts to differ from the original somewhat. But largely, I’m finding it hard enough to get through the original because of time constraints, so I’m not sure I can really see the point.

However, if you’ve not seen the original and probably never will, then you should probably tune in to give it a try at least. It might not be to your taste, and even if it’s not as good, it’s still a pretty decent bit of television, with a good cast and enough intrigue to keep anyone guessing as to whodunnit. You never know – it might even have a less disappointing ending than the original (I hear).