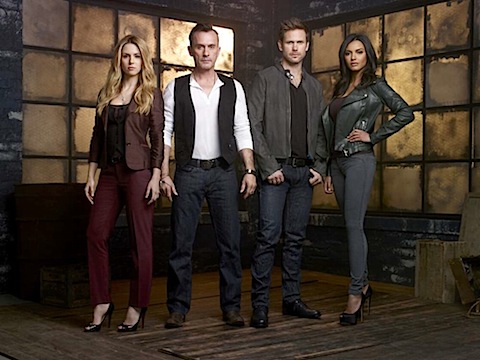 In the US: Tuesdays, 9pm ET/8pm CT, The CW
In the UK: Mysteriously acquired by an unnamed network

Cults are really big right now on TV. The Following is on Fox and now we have Cult on The CW. Intriguingly, both shows were thought up years ago, The Following as the script for Scream 3 and Cult as a show for the now-defunct predecessor to The CW, The WB.

The two shows both have good pedigrees. The Following comes from long-time writer Kevin Williamson (Dawson’s Creek and The Vampire Diaries) but Cult comes from the even older pen of Rockne S O’Bannon, who started out on The (New) Twilight Zone, before going on to create Farscape, Alien Nation and seaQuest DSV.

So perhaps it’s appropriate that Cult is a trickier, more knowing beast than The Following. The Following, of course, has all kinds of degrees of Scream-esque meta, but Cult takes things a step further. It begins seemingly as a somewhat stupid, tacky The CW show in which a young blonde cop, Kelly Collins, (Alona Tal) and an older, fatter, blacker cop have to investigate the cult run by Billy Grimm (Robert Knepper) to which Collins used to belong.

But just as they find somewhat buried in a wall and he utters the somewhat ludicrous and unfathomable “‘Well hey. These things just snap right off,” we discover we’ve been watching a TV show within a TV show. Collins is really actress Marti Gerritsen and Knepper is actor Roger Reeves and they star in The CW’s Cult.

With me so far? Good. Anyway, so far, so Pulaski/30 Rock. But rather than being a spoof or send up of the making of a TV show, Cult is a far darker creation that focuses on the nature of cult television and its fans. This Cult has fans and it’s created web sites and all kinds of other clues for them to seek out to discover more about the show. Except perhaps it’s not all fiction. Because when one fan seems to work it all out, he disappears. When his journalist brother Jeff Dean Sefton (Matthew Davis) comes looking for him, he starts to discover the same messages in the show that his brother did, and with the help of a researcher on the show, Skye Yarrow (Jessica Lucas), they begin to investigate Cult, to see if they can find out what’s really going on and what’s happened to his brother.

Here’s a trailer that gives away all the good bits from the first episode.

About
Investigative journalist Jeff Sefton (Matt Davis, “The Vampire Diaries”) has learned to live with his younger brother Nate’s relentless string of obsessions, especially his latest rant that a hit TV show intends to harm him. However, when his brother mysteriously disappears, Jeff takes Nate’s paranoia seriously, and in the process uncovers the dark underworld of the TV show “Cult” and its rabid fans.

The fictitious show, centered on the cat-and-mouse game between a charismatic cult leader and the detective who was once a cult member, has become an obsession for its viewers – and now some of its devotees seem to be taking their fixation to deadly extremes in the real world.

In the parallel worlds of the show-within-a-show, the cult’s leader, Billy Grimm, is played by actor Roger Reeves (the double role of Billy/Roger is played by Robert Knepper, “Prison Break,” “Shameless”). Roger plays Billy as a compelling but ruthless leader, a man whose primary agenda is winning back his former follower and lover, Kelly Collins, played by actress Marti Gerritsen (the double role of Kelly/Marti is played by Alona Tal, “Supernatural,” “The Killing”). Since escaping from the cult, Kelly has become an LAPD detective. When her sister is kidnapped, Kelly finds herself drawn back into an investigation of the group’s activities, and she struggles to keep Billy at a safe distance, knowing he would stop at nothing to get her back. As the television show grows in popularity, cast members Roger and Marti feel the effects in their “real” lives – Roger isn’t sure who he can trust, and Marti is beginning to realize that being the star of this particular show may have truly dangerous consequences.

The only person who seems willing to help Jeff with his investigation into this double world is Skye Yarrow (Jessica Lucas, “Melrose Place,” “Cloverfield”), a young research assistant for “Cult” who has also started to grow suspicious of the increasingly dark happenings surrounding the show. Jeff and Skye are both driven by personal reasons to uncover the mysteries surrounding “Cult.” Jeff is focused on finding Nate, the brother he raised following the death of their parents, while Skye is searching for answers about her father, who went missing 10 years ago and is presumed dead. All Skye knows is that her father was investigating Steven Rae, the reclusive executive producer/writer who created “Cult.” In fact, she took the job on the show in order to make contact with Rae and see if he will answer her questions. Jeff and Skye are practically strangers to each other, but they are united by the common goal of finding out what happened to their family members.

Jeff will need all of the investigative skills he honed as a journalist to make sense of the treacherous world he and Skye have entered. It soon becomes clear to Jeff and Skye that the gruesome plot twists on this television show are much more than fantasy for some very unfortunate people. The hardcore fans of “Cult” would kill to see what happens next…

Is it any good?
It’s not so much good as intriguing.

It relies on a couple of things. First, it relies à la Scream on everybody knowing the tropes of horror and it playing with those tropes while still using them as much as possible. As with The Following, everyone and anyone could be a potential evil-doer, since the show-within-a-show is possibly being based on a real cult, and so a lot of your time is spent trying to work out who the obvious cult member is and who the secret one is beyond the obvious one who’ll surprise you later on. Add to that the usual ‘Don’t go into the basement’. ‘Don’t put that CD into your computer’ et al and the obvious joys of the genre are there to be had by all. There’s even a nod to They Live, with a pair of glasses that reveal the hidden messages dotted around the world that you’d otherwise never notice.

But the show also relies on your awareness of things cultish, of what fans of popular shows will do and the level to which they’ll immerse themselves in the show’s minutiae (cf Lost). The show is, in effect, one long puzzle to be solved, a commentary on cult TV, a commentary on fans and a musing on how fiction and reality can bleed into one another – it even has the real Cult credited as having ‘Stephen Rea’, the show-within-a-show’s exec producer and creator, as an exec producer. It’s a tacky, silly musing, but enjoyable all the same.

The show’s taking an odd tact, mind, when it comes to characters. Although we do get some decent background to David and Lucas’s characters, they’re nowhere near as interesting as actors as Knepper and to a lesser extent Tal, both of whom rarely feature in the first episode as the actors, mostly only as the characters in the show-within-a-show. As a result, the show is initially duller than it could be. Later episodes are set to give them more screen time, thankfully, but that’ll need to come quicker.

The show also requires you to give a monkey’s about the mystery, and while it’s tricky and intricate, it’s also a little silly. I’m not sure I care enough about what the potential cult is to want to stick around and find out about in x seasons’ time, while playing a game of “Are you one of them?” whenever anyone pops up. That can wear thin very quickly.

But it’s a promising start and it has far more to offer than The Following or the likes of Beauty and the Beast. If you like your horror a bit meta and not too bloody, this could be a good show for you.

The news for Wednesday 27th January 2009