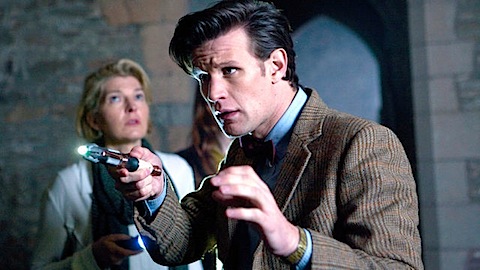 Ah, pathos, tears, romance, cameos by famous people, a domestic UK setting, characterisation, a big hand-wavey, 30-second sonic screwdriver way out of a massive alien invasion, menacing kids, families, an emoting, lonely Doctor, voiceovers, continuity references and more – isn’t it great that Russell T Davies came back to write an episode of Doctor Who for Steven Moffat, bringing with him all his writing trademarks?

What’s that Sootie? Rusty didn’t write The Power of Three? Then who did?

Yes, the man responsible for Cyberwoman, Countrycide, Adrift, Exit Wounds, The Hungry Earth and Camelot, to name but a few, most of which have been banned by Geneva Conventions, has finally turned in his indisputable masterpiece – by the simple mechanism of instead of merely copying every B-movie he’s ever watched (with perhaps the exception of Super 8), pretending to be Russell T Davies.

Shame it didn’t have a proper ending and the plot was nonsense, but that’s what happens when you copy Rusty.

About
The Doctor and the Ponds puzzle over an unlikely invasion of Earth, as millions of sinister black cubes arrive overnight…

Was it any good?
Apart from an ending that can best be summarised as “he reversed the polarity of the neutron flow and stopped the alien invasion” and a plot that can equally well be summarised as “a three year old could come up with a better invasion plan than that”, this was easily Chris Chibnall’s best script for pretty much any TV show ever, including Life On Mars.

The basic plot – for it is indeed basic – is that some identical indestructible tiny cubes land on Earth. And nothing happens. The Doctor doesn’t know what they are. UNIT, now headed by Brigadier Lethbridge-Stewart’s daughter Kate (as featured in Downtime and Daemos Rising, but played here by Jemma “daughter of Corin” Redgrave), doesn’t know either. So for about a year, rather than hang around, the bored Doctor buggers off in and out of the Ponds lives, the Ponds now having to decide for themselves whether to embrace their ‘real’ lives or to go galavanting off with the Doctor whenever he drops by.

The Doctor, largely at the instigation of Rory’s still marvellous dad, Brian – played by the equally marvellous Mark Williams – decides to spend some time with the Ponds, getting to know them in their lives. But then, the cubes all go a bit mental, start giving everyone heart attacks and the Doctor and co go upstairs to a spaceship where we discover a time-travelling Steven Berkoff is trying to stop human beings from colonising the galaxy in the future by killing them all now.

The Doctor points his sonic screwdriver, the cubes bring everyone back to life and the Doctor and co go home to the Ponds’ place. Rory’s dad gives the Ponds the A-OK to go MIA from their lives for a bit. Cue the final Ponds stories next week – there be River Song and Weeping Angels to look forward to, you lucky people.

Essentially, then, this was a story of two halves: a clever, funny, interesting, surprisingly emotional, continuity-touching character piece in the style of Love and Monsters; and a great big rush ending where it’s revealed that the aliens have possibly the stupidest plan to kill the human race yet, one that’s easily stoppable with a sonic screwdriver wave. Damn.

Because let’s face it, as plans go, this was stupid. You have an entire planet practically covered in cubes that are indestructible and can do virtually anything; you’ve had them analysing human beings for weaknesses for a year; and what do you do to wipe them out at the end of that? Deploy an incurable disease? Poison gas? Explode the cubes? Shoot everyone? Have them float around at high speed cracking people’s skulls? Maybe have them combine 2010-stylee, eat up big chunks of the Earth and then compress it so that the entire planet achieves nuclear fusion and ignites.

No, you have them give everyone electric shocks. Not shocks big enough to simply fry everyone of course. No, electric shocks that are enough to kill people for 20+ minutes and then when reversed, to bring everyone back to life without even the slightest hint of brain damage.

You couldn’t come up with a Rustier ending if you tried.

But those issues aside, we have characterisation and character development for the Ponds and the Doctor. We have some intense creepiness for a good 30 minutes or so. We have laughs (the Zygons in the Savoy), we have tears, we have UNIT and so many other lovely touches that I clean forgot that Chris Chibnall had written it. Even Murray Gold was on fine form and Alan Sugar and Brian Cox were both good cameos.

So as with 42, we can again conclude that Chris Chibnall is perfectly capable of writing an excellent half a script, perhaps even two-thirds… followed by complete rubbish. Still, that first half is getting better and better each time and the point at which the inevitable descent into bobbins occurs is getting closer and closer to the end. One wonders if Chibbers will ever turn in perfection or whether, as with Zeno’s Paradox of Achilles and the Tortoise, he’s always just going to get closer and closer and never actually reach the end. I’m hoping for a, I’m suspecting b, but let’s see what happens next series.

A trailer for Torchwood: Miracle Day
[…]

Review: Doctor Who – No More Lies

My review of No More Lies