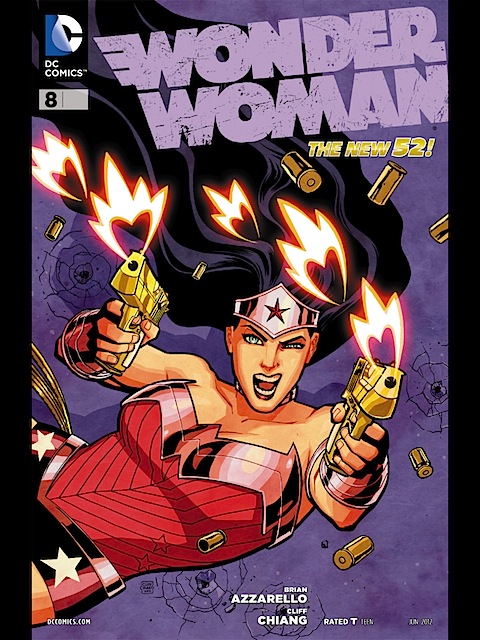 It’s here. The cover we’ve all been waiting for is here at last. Isn’t that cool?

But would it surprise you, long-time reader of either these reviews or the new run of Wonder Woman, that events depicted on the cover may not actually occur within the narrative itself? Of course not. In fact, this issue, the exact opposite of what’s shown on the cover happens. To find out what I mean by that and to take a gander at Wondie’s new cossie, follow me after the jump.

We’ll also be discussing the Wonder Woman bits of Justice League #8, in which finally, you will believe a (Wonder) woman can fly. At last.

Plot
To rescue Zola from Hades, Wonder Woman gets Hephaestus to tool her up with new armour and weapons. Apparently regarding her choices as archaic, Hephaestus insists that Wonder Woman take Eros’ guns (of love?) with her down to Hades, a place only she and Hermes can go.

Hermes gives her a lift to Hades, which now looks like London since it can change appearance to suit Hades’s whims – and he’s expecting Wonder Woman. After fighting the dead, who, it turns out, make up most of the architecture of Hades’s realm, Hermes and Wonder Woman find Zola in a dark version of her home back in America.

However, Hades also finds them and his price for letting them take Zola is Eros’s guns, which Wonder Woman gives him. Unfortunately, he promptly shoots Wonder Woman through the heart with them. Is Wonder Woman now in love with Hades? Tune in next month to find out more.

Is it any good?
So a lot to commend this issue. After the slow pace of issues 2-5, we’ve finally got some action worth mentioning, Wondy showing us what she’s got when it comes to using the sword (something only demonstrated to us previously in the Justice League titles):

We also get to see Hermes strut his stuff, now he’s all healed:

As you may have noticed, Wonder Woman also gets a new outfit for her journey to the underworld:

Apparently, this was one of the ideas Chiang and Azzarello had for a new look for Wonder Woman, before the nu-52 reboot was announced – they even considered making the golden lasso her scrunchy. Anyway, apart from the Roman influences and the see-through skirt, it’s quite nifty, isn’t it?

On top of that, we have Cliff Chiang drawing London, albeit a Hellish version, which is a considerable step up from the actual monstrosity we had when Tony Atkins was drawing the title:

We also get the lovely concept of the underworld actually being built up from the souls of the departed, a somewhat unique vision for what the dead do to fill eternity:

After the Zola-Hermes-Wonder Woman reunion, we get Hades wading in and demanding a queen. If he’s not going to get Hera, he’s going to have Wonder Woman instead:

It’s a nice twist, particularly given the misleading cover, and beautifully illustrated (look at the pink glow around Wonder Woman as she’s hit). Is she now in love with Hades, or is she in love with the first person/people she sees after opening her eyes (Zola and/or Hermes)? Let’s see next issue.

But for Greek myth purists who are still reading the title and haven’t quit after its many previous infractions against the gods in general, Hermes, Poseidon, the Amazons, Eros/Hephaestus, Hera, etc, etc, and for those who already are wondering what it is DC/Azzarello has against women and/or goddesses, judging by the lack of the decent, powerful women and goddesses that previously used to inhabit the pages of this title, the obvious question in all of this is: where the hell is Persephone? Hades already has a queen, why does he need another one? Has Azzarello written her out of this altogether?

It’s not like this is some obscure story – everyone who knows anything about Greek myth knows the story of Persephone, the pomegranate and why Demeter causes winter every year whenever Persephone returns to the underworld. Does Hades need a summer time-share wife for the months when Persephone isn’t around?

Anyway, I’m sure it’ll fuel the conspiracy theories whatever happens next issue.

The idea of Hades needing Wonder Woman for a wife is also a bit icky, thanks to his odd redesign. He’s apparently a boy, one with a stupid candle crown – is Wonder Woman destined to be an inadvertent paedophile, sexually attracted to a child, even if the marriage is never consummated? Yuck. I’m hoping it’s Hermes or Zola who are the true objects of her desire, assuming this isn’t some bluff by Hephaestus.

Nevertheless, despite Azzarello’s icky subject choices, his reversion to making supposed cockney Lennox almost unintelligible, his infractions against Greek myth, and the dialogue that’s supposed to be deep but which veers towards incomprehensible at times…

…this is again another fine issue that only leaves you wanting more. Is Hephaestus a traitor? Is Wonder Woman really in love with Hades now? Will she save herself or can Hermes and Lennox rescue her? What will happen when Zola’s baby is born?

So many questions and so few answers. Hopefully we’ll find out more next issue.

Justice League #8
It’s time to deal with a jauntier, less mature title, since Justice League #8 was out this week, too. Again, as with last issue, this continues five years after the events of #1-6, supposedly around the same time as the events of Wonder Woman. However, it can’t help but be noticed that these are almost two different Wonder Womans. The Wonder Woman of Justice League is just an older looking version of the one in the earlier Justice League issues: humorous, a bit backward in the ways of the world, slightly pornographic, always up for a fight, with Superman now the centre of morality in the League:

Green Arrow and his attempts to gain admission to the Justice League are the focus of this issue, and like apparently all superheroes with ‘green’ in their name, he’s a dick who spends all his time hitting on Wonder Woman.

Can anyone at DC say “Male gaze”?

But there are a couple of notable Wondy things this issue. As well as the omnipresent Steve Trevor (although she doesn’t interact with him this time round), we have the mention of an island:

Paradise Island? Who knows – maybe it’s a coincidence that Wonder Woman is the one asking, but with Steve Trevor having visited it, Green Arrow being in cahoots with Trevor, and presumably Aquaman being able to get to PI, maybe not. Could this be the beginning of some groundwork for a later story thread, I wonder?

We also have a brief visit by Martian Manhunter, who gives the League a slight problem in flashback:

He appears to have shrunk Wonder Woman’s costume. Don’t ask me how, though.

But I’ve been saving the best to last. Because, finally, unequivocally, to the whoops of Wonder Fans around the world, we’ve finally seen Wonder Woman fly for definite for the first time since the big reboot in September. And it’s a pretty impressive bit of superness she’s indulging in when she’s doing it:

Yep, she’s flying while lifting a plane. We have a woman of wonders again – at last*.

* Although the bit of her scabbard that’s used for securing her sword to her leg appears to have metamorphosed into a garter. Which is odd.

A leery but lovingly made ad featuring Catwoman, Batgirl and Wonder Woman

A leery but lovingly made ad featuring Catwoman, Batgirl and Wonder Woman