Spies are back. In a sense, they never really went away, but with several spy show pilots lined up for the fall, Covert Affairs now a regular on the USA Network and Homeland clearly the best new show of last fall, it seems like we’re ready to have secret agents back in our lives now, particularly with ABC’s Missing being thrust onto our screens just to fill in the gaps.

The big new trend in spy shows, though, as that list shows, is female spies. Covert Affairs stars Piper Perabo, Homeland revolves around Claire Danes, The Asset‘s lead is Ali Larter and Missing has Ashley Judd doing a Jason Bourne all over Europe (yes, they actually have come all the way to Europe to film this).

I say doing a Jason Bourne but Missing is really a sort of hybrid between The Bourne Identity and Taken, with former CIA operative Judd beating up Eurotrash to rescue her son, who’s been kidnapped by who knows who? While it never quite hits the heights of either movie, it’s actually a pretty good stab at doing both on the small screen.

Apart from the chase on Vespers. That was just silly. Here’s a trailer – yes, that is Sean Bean. Yes, there are a lot of spoilers for later episodes.

About
How far would you go to save the only thing you have left in the world? After a murder took Paul Winstone’s life, his wife Becca (Ashley Judd) and their son Michael struggled to rebuild their lives. Now, ten years later, Michael goes missing under suspicious circumstances, and Becca will do anything it takes to find him.

Ever since Michael saw his father Paul blown up when he was just 8-years old, Becca has always been a tad overprotective. But she couldn’t say no to Michael’s amazing opportunity to study in Rome. Just a few weeks into his trip, however, Michael disappears. Becca flies to Rome for answers, but no one takes her seriously—so she takes matters into her own hands. You see, Becca isn’t just a mother looking for her son. Both she and Michael’s father used to be lethal CIA agents, and whoever took Michael messed with the wrong mother. Now, if Becca wants to find her son alive, she will have to rely on old friends and reopen old wounds. Her resourcefulness, skill and determination will be put to the test—but a mother’s love knows no limits.

Exotic locations and thrilling twists will keep you riveted in Missing, the new drama from creator, executive producer and writer Gregory Poirier (National Treasure: Book of Secrets) and executive producers Gina Matthews and Grant Scharbo (The Gates) and Steve Shill and James Parriott.

Is it any good?
It’s by Gregory Poirier, who wrote National Treasure: Book of Secrets (you know, that film with Nicolas Cage globetrotting to find ancient artefacts), and in terms of quality it’s about halfway between NT: BoS and Taken/The Bourne Identity.

In a lot of ways, it’s very, very derivative. There are scenes and even directorial flourishes that you can trace directly to either Taken or The Bourne Identity, whether it’s the room full of people being barked orders by a gung ho CIA boy (Cliff Curtis, last seen in Trauma) or Judd trying to work out which apartment her son was staying in when he was kidnapped using a cellphone. The dialogue isn’t exactly what you’d call fresh and sparkling, and there’s not really any point where the show feels authentic, whether it’s Judd’s running (a serious runner without a heart monitor, water bottle or even route tracker?), her work in a flower shop, the baddies’ hideout (they’re inside yet it’s padlocked from the outside), her son coming home on a plane with an unwrapped china teapot in his backpack, or her relationship with her son when he’s all grown up (way too close). And there’s some crackingly bad green screen work and Photoshopping,

But for all that it’s still a pretty good hour’s worth of television. Judd, who, poor lass, is looking a bit puffy-faced thanks to a sinus infection and who’s now best known as a T-shirt, poster and meme (which I won’t link to)… 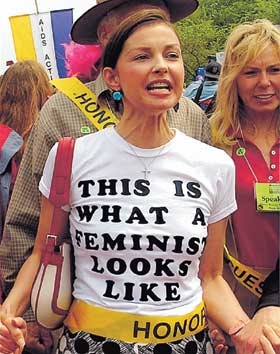 …is actually very good and handles the fight scenes extremely well, even if the director doesn’t always manage to. There’s some intriguing cameos, including Sean Bean (who presumably will return in flashback assuming (spoiler) he didn’t fake his own death and has now abducted his own son or the baddies have abducted the son to use as leverage), John Carradine (Dexter) and Gina McKee (The Lenny Henry Show, Our Friends in the North, In The Loop, Notting Hill, The Forsyte Saga). The show never quite descends into sci-fi spy territory, always maintaining at least one foot on the ground (although almost never two feet) when it comes to technology and what’s achievable. There are some well-handled character moments and the show manages to maintain a healthy tension throughout. There’s some great location filming, there’s plenty of mysteries and questions that need answering that hopefully should be answered in subsequent episodes.

All in all, while it doesn’t quite have the budget to do full-on movie pyrotechnics, it’s certainly better than the majority of network TV shows at the moment and beats The River and Charlie’s Angels, for example, at practically every level, making it the best new ABC drama for pretty much a year or more. Of course, ABC doesn’t have much success with mid-season, action-packed spy dramas, but it’s definitely one to give a try.

Friday’s “Ali Larter is a Legend, CTV plays and is satisfied, and The Bridge becomes The Tunnel” news

Random Acts of Ali Larter: Having a Baby