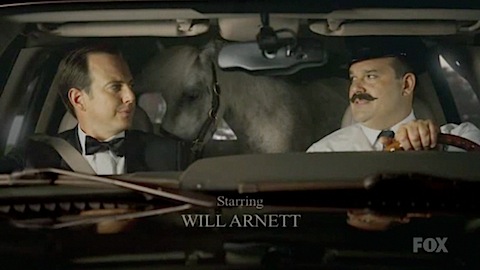 After years of fielding comedies that only fit loosely into that category – laughter while watching them was a somewhat rare occurrence – Fox clearly sat up and paid attention last year when ABC blew everyone out of the water with Modern Family. Now, as well as a Greg Garcia comedy, they’ve rolled out a second single camera show, this time from the team that brought us Fox’s previous good comedy – Arrested Development.

Starring Will Arnett (Arrested Development, 30 Rock) and Keri Russell (Felicity), this sees aimless rich boy Steve Wilde (Arnett) reunited with his childhood love Emmy Kadubic (Russell) who’s been trying to saving some Amazon natives from the terrible oil workers his father has hired. How are they reunited? Her daughter feigns mutism for six months since she wants to have a normal life back in the States.

With guest appearances by David Cross and Peter Serafinowicz, this pilot episode is actually pretty funny, but is it Arrested Development funny? Not quite. All the same, it shows enough sparks of life to make me think Fox is no longer the comedy wasteland of yesteryear.

Here, enjoy a lovely trailer for the first ep, featuring footage from the slightly different pilot, complete with alternative guest cast. It’s pretty much the same though:

Plot
From the Emmy Award-winning creator and the star of the critically acclaimed FOX series “Arrested Development” comes RUNNING WILDE, a romantic comedy starring Will Arnett as Steven Wilde, a filthy-rich, immature playboy trying desperately to win (or buy) the heart of his childhood sweetheart, Emmy Kadubic (Keri Russell), the über-liberal humanitarian who got away – all told through the perspective of a 12-year-old girl.

Steve Wilde has never performed a selfless act. But why should he? He’s rich! The son of an oil tycoon, Steve hasn’t had to work a day in his life and has always gotten everything he’s wanted – with one exception: the love of Emmy.

The daughter of a former Wilde housekeeper, Emmy is an earnest do-gooder who has spent her adult life trying to save the world. And though Emmy is content living with an indigenous tribe in the Amazon rainforest, her 12-year-old daughter, Puddle (Stefania Owen), just wants to be a normal kid experiencing her adolescence in a normal place. And she would speak up except for the fact that she hasn’t spoken in a few months.

When Wilde Oil’s expansion in the rainforest threatens her adopted tribe, Emmy decides to attend Steve’s self-thrown “Humanitarian of the Year” award ceremony in hopes of convincing him to help her cause… and also maybe because she still has a thing for Steve. But same-old Steve is unwilling to help because fighting Wilde Oil (a/k/a Dad) means putting his meal ticket in jeopardy.

Rather than run the risk of letting Emmy slip away again, Steve pulls out all the stops to win her heart. To do so, he enlists the only other people in his life who can help: Oxford-accented neighbor and “frenemy” Fa’ad Shaoulian (Peter Serafinowicz); Migo Salazar (Mel Rodriguez), Steve’s employee/sidekick/errand-boy; and (reluctantly) the scheming Mr. Lunt (Robert Michael Morris), Steve’s “manny”–turned-secretary as well as the biggest protector of Steve… and his own job.

Is it any good?
I’d say about 50% of it is funny, sometimes laugh out loud funny. Quite a high percentage of that 50% is down to Peter Serafinowicz, who plays Arnett’s neighbour (it’s about time Serafinowicz had a chance at American TV success, given the failure of Our Thirties four years ago), and his ponies. Will Arnett gets most of the rest, Mel Rodriguez gets a few too, and way down at the bottom is Keri Russell – she really doesn’t get many funny lines in this. Good lines, yes, but funny? No.

Surprisingly, a lot of the humour is actually visual rather than verbal, and much of the verbal humour is about clueless rich people and equally clueless do-gooders. Puddle’s manipulations and narration are quite funny, with her explanation of how she trained Arnett and Serafinowicz to lie and their failure to stick to the script among the episode’s best moments (not quite up there with the ponies though). Quite a few of the jokes fall flat, mainly (shock!) due to Arnett’s delivery, although he hits as many home runs as complete misses. There’s also not much chemistry between Russell and Arnett yet, although there are a few touching moments between them as Steve slowly starts to mature and grow a soul.

I’d say give it a try and keep watching, at the moment. It’s not the obvious success that Modern Family or Community were from the get-go last year, and it really needs Serafinowicz to be in as many episodes for as much time as possible. But for Fox, it’s excellent and it may well find its feet in a few weeks.

Monday’s “you looking at Odin?” news

A collection of Liz Lemon’s flashbacks on 30 Rock