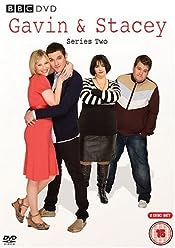 Do you know what my wife said when she saw this had arrived through the post? "Oh, lush."

I’m not saying she is Joanna Page or Stacey, just that sometimes the similarities get a little spooky.

Anyway: Gavin & Stacey, bit of a sleeper hit during its first series on BBC3, won surprising amounts of awards, then suddenly went through the roof during series two, which went on to win even more awards.

Now series two is going to be repeated on BBC1 (starting this Friday) just in time for a Christmas special, also to be aired on BBC1, and for this DVD release.

It’s a lovely little sitcom about a girl from Wales and a boy from SE England who meet, fall in love and get married (rings some bells. Hmm). But as the tag line almost says, it’s not just the two of them and the story is as much about their best friends and family as it is about them.

Series two
I’ve already reviewed the first series on DVD so I won’t talk about it much here. As I mentioned during that review, though, series two – against all expectations – is actually better than series one. Delightful as series one was, it was something of a fairy tale and its characters hadn’t quite gelled properly.

Series two is not only longer, so has more time to develop characters and themes, but better written. Some of the fairy tale aspects disappear as Gavin (Matthew Horne) and Stacey (Joanna Page) have to move from a long-distance relationship to working out where and how they’re giving to live together. Stacey can’t find a job in Essex and misses Wales desperately. They can’t afford a home of their own – unless it’s in Wales. And Gavin’s an insensitive tit.

As with series one, though, Gavin and Stacey are usually the straight characters to their more comedic friends and relatives, and they all get a good variety of situations to expand into. Gavin’s best friend Smithy (James Corden) gets a sister (Sheridan Smith) to spar with (literally); Nessa (Ruth Jones), Stacey’s best friend who can’t stand Smithy, is nevertheless pregnant with Smithy’s child but is keener on hooking up with her ex-, ‘riddled’ Dave (Rhodri Morgan); Stacey’s family, the eternally omelette-making mum Gwen (Melanie Walters) and heavily closeted uncle Bryn (Rob Brydon), are having to adjust to a lack of Stacey in their lives; and Gavin’s parents (Alison Steadman and Larry Lamb) are having to adjust to too much Stacey in their lives.

Most of the best lines and gags go to Smithy and Nessa, perhaps unsurprisingly since Corden and Jones write the show, and there are few funnier (and wrong) scenes on TV than Smithy and Ness’s KFC double entrendre fest. Nevertheless, everyone shines in their respective roles as their characters are given a chance to develop, particularly Horne and Page as Gavin and Stacey’s marriage begins to hit the rocks.

By turns heart-warming and heart-breaking, series two of Gavin & Stacey manages to make you laugh without resorting to anything much beyond the mundane events you find in real life. If you haven’t already seen it and you can’t be bothered with the repeats, get this – you won’t regret it.

Subtitles
Normally, I don’t mention the subtitles, but I will this time as they’re important. Not only are there English subtitles for the hard of hearing, as with series one, but this time, there are Welsh subtitles, too – which given the show’s popularity in Wales seems a smart move, even if those in the North might get miffed that yet again, it’s a Cardiff-centric show. The subtitles are, as far as I could see, in standard Welsh rather than southern Welsh so no one could accuse the subtitlers of picking sides though.

The subtitles are available on all the extra features as well, so it’s perfectly possible if you can’t speak Welsh to watch the footage from S4C’s Uned 5‘s set visit and still work out what’s going on – although the quick answer is not much, apart from looking in the show’s wardrobe and testing the actors on their Welsh pronunciation. All the same, this is probably the only time you’re ever going to see anything S4C has ever made being stuck on DVD, so enjoy it. Obviously things like Ffermio I can understand and Tipyn o Stad is pretty ropey, but come on S4C: three series of Caerdydd, now. What’s keeping you?

Outtakes and documentaries
Also on the second disk of this two-disk set is a series of 90% dull, 10% interesting outtakes, most of which involve people fluffing their lines and cracking up, but a few of which are quite entertaining; a mini-documentary as cameras follow Corden and Jones on a trip to appear on Friday Night With Jonathan Ross, which is funny but a little pointless; and another mini-documentary entitled Story of Series 2. This, again, is Corden and Jones explaining some of the processes and decisions involved with making series two, and is at its most fun when its showing them at their desks writing the show.

Commentaries
Otherwise, much of what’s revealed in that second documentary is duplicated in the episode commentaries. Unlike series one’s commentaries, not only is there a commentary on every episode, the commentaries are "in-vision" and involve various combinations of the cast, with Joanna Page only appearing for the first two episodes before heading off to appear in Fat Pig, Larry Lamb only appearing from mid-way through episode four and Steadman disappearing randomly then reappearing for episode seven (they were filmed out of order) after going off to rehearse a play of her own. Page, Lamb and Steadman don’t really add too much, although they get better once they’ve warmed up.

The core group of Corden, Jones, Walters, Horne and series director Christine Gernon – Brydon’s off playing golf with Ronnie Corbett or something – are at their most talkative and interesting when it’s just them, although Walters is silent the majority of the time and Corden, Jones and Gernon are pretty gabby the whole way through. Things pick up even more once enterprising runners bring in some alcoholic lubrication during episode three.

Most of the time, the commentary focuses on what’s going on on-screen, rather than anecdotes, Jones and Corden having a slightly annoying habit of saying how much they love what they themselves have created ("I love this bit with Nessa. She’s so confident." Well, that’s how you wrote and played her…).

But all involved do provide useful and relevant information for fans as well. You won’t be able to watch episode one without thinking "Of course that’s the Millennium Centre, not an airport!" again, for one thing; or cross over the Severn Bridge without remembering that Corden did once manage did get over with only £4.80 or that Jones might well be the new face of the "Let’s be able to use credit cards on the Severn Bridge" campaign being spearheaded by one enterprising AM.

Extras overall verdict
For a comedy show DVD, that’s not a bad range of extras and the Welsh subtitling is above and beyond (I wonder if Ruth Jones had anything to do with that). However, they’re very focused on Corden and Jones, so if you were interested in finding out much more about Brydon in particular, or Horne, Page or any of the other actors and their opinions and interpretations, you’re going to be a touch disappointed, even if you do sit through all seven episodes’ in-vision commentaries.

I’ll leave you with a couple of my favourite bits from series two in the form of YouTube videos.