WARNING: If you are married to a blonde woman from South Wales who’s lived in London for a while and has lost her accent and started talking like an English person, you might find that after exposing her to this DVD for two or more episodes, she exhibits certain behaviours. Her accent might return; she might start saying "lush", "by here" instead of "here" or "whereto" instead of "where"; and she might start calling you with "Oh! Rob!" These effects can last anything up to three days or more, during which SHE WILL BE UNAWARE SHE IS DOING ANY OF THIS. It’ll be very endearing though. 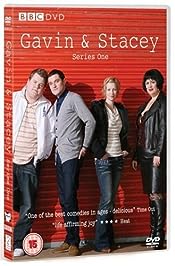 The thing about award-winning comedy shows is that no one’s going to watch them if you stick them on a network primarily devoted to Two Pints of Lager and shows like Can Fat Teens Hunt?.

Had we known there was a show called Gavin and Stacey in which a blonde woman from South Wales meets, falls in love with and marries a dark-haired guy from SE England, we’d have watched every single episode and repeat from the very first moment – it’ll be the closest we get to a biopic on Hallmark. Instead, it’s not until the second series (which is brilliant) that we found out about it. Heaven knows how those awards people came across it.

Although BBC3 will no doubt be repeating the first series again approximately five times a day (seven times a day if it wins any more awards) once the second series finishes, we decided – as might you, gentle reader – to give that first series a go by buying it on DVD. If you are considering it, here’s a handily timed reviewed to help you decide whether to spend your hard-earned money or not. Although it’s only £8 on Amazon – bar-gain!

Plot
Gavin is an ordinary boy from England, Stacey is an ordinary girl from Wales. They speak every day on the phone at work, and yet they’ve never met… until now. But when Gavin and Stacey finally meet and their ordinary worlds come together, we see, through their families, their friends and their differences, that there’s no such thing as ‘ordinary’ after all.

Is it any good?
It’s something of a bittersweet experience watching the first series after the second series. Obviously, you know how it all ends, so there are few surprises, which is slightly disappointing.

And, truth be told, the first series isn’t as good as the second series – which is also a good thing because it means the show’s getting even better as time goes on, rather than going off the boil. The characters are a little less larger than life in series one, the writers not yet having the confidence they exhibit in series two. So while it’s a little more realistic, it’s also a little less funny. It’s great, just not series two great.

All the same, all those awards are justly deserved. It’s hard to do culture-clash comedy. While you can do nuance quite easily in drama, the temptation in comedy is always to reach for a stereotype.

Taking a guy from Essex and a girl from South Wales could have been a goldmine for every stereotype in the book. Yet the writers, while firmly showing that their characters do have different backgrounds and different attitudes, create a whole environment of well observed people. Gavin may be an Essex boy at heart, but he’s not a chav, is quite nice and has a lovely, warm family; Stacey may be from South Wales and a bit dappy but she’s not permanently soddled, thick or loud-mouthed.

There’s just as much variety and fondness in the writing for the other characters. Ness, Stacey’s best friend, is a definite character, I won’t lie to you, but is the source of both great stories and one-liners. Bryn (Rob Brydon), Stacey’s uncle, is a little dull in the first series, but really comes into his own, almost to supplant Ness, in the second. And Smithy (James Corden), Gavin’s best friend, is the perfect Essex foil for Ness’s spirit of South Wales.

The acting’s great, even if Alison Steadman is deploying the same, slightly rubbish accent she’s been using since Abigail’s Party, with Rob Brydon, Ruth Jones and James Corden particularly outstanding.

The first series starts off well, has a little bit of a dip around the middle, then picks up again for the (spoiler alert) wedding – one of the most realistic ever filmed – at the end. There are some great cameos, including Matt Lucas as a stag-night organiser and most of the cast of The History Boys as Gavin’s Essex friends. You’ll definitely be wanting more by the end, though, so thank God there’s already a second series.

Extras
For a comedy DVD, it’s surprisingly packed with extras. There’s a "How it all happened" documentary that explains how the show came about, how it was cast and how it was written. While it’s nice to see all the actors talking about the show, and the documentary makers are clever enough to feed questions and comments from one set of interviews to the people interviewed in other segments, you don’t really learn much about the actors’ interpretations of the role, the characters, etc. Instead, it’s more about the writing and the cameraderie of the cast.

There’s a set of outtakes, which are a little unfunny, although a couple have their moments. There’s also a video of the filming in Leicester Square that was put up on YouTube while the show was being made.

But the definite highlights are the audio commentaries by Ruth Jones, James Corden and Christine Gernon, the series director. As well as giving you some insights into the filming (James Corden had actually fallen asleep in one scene) and why particular scenes were written and shot in particular ways (or improvised by Rob Brydon), you get a little more background about the characters (such as why Ness is the only one with a Barry accent, while Stacey’s family all have Swansea accents – which was certainly bothering us a bit) and a few off-the-cuff, highly accurate observations (like the fact that the only Welsh phrase all non-Welsh speaking Welsh people know is "Rydw i’n hoffi coffi" – I would like some coffee). Worth listening to, even if it does stop you listening to the dialogue, unfortunatly, as you watch it for the umpteenth time.

Definitely worth the purchase price if you haven’t seen the first series; probably still worth if it you have. Be warned: you’ll spend all your time quoting from it though.

This is my favourite Gavin and Stacey moment. It’s from series two, but what the hell. Oh!

Today’s Joanna Page: To The Ends of the Earth

Today’s Joanna Page is To The Ends of The Earth

Joanna Page is the new face of Superdrug

What have you been watching? Including Hooten and the Lady, Doctor, Doctor and High Maintenance

A review of the TV, films and theatre I saw in the week ending Monday 19th September