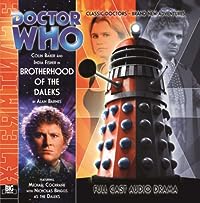 Hands up anyone who’s not a Charley fan. Right, get out: you’re barred.

Since we’re now left only with people of pleasing intellect and taste, we can begin the review. First, as a brief aside, is "Nicholas Briggs as the Daleks" really a major selling point, worthy of the cover? Okay, so he does the TV voices, too, but who, other than committed fans, knows that and cares. More to the point, won’t they already be buying at least three copies of every Big Finish release already? You don’t think it’s because Briggsy is one of the Big Finish producers that his voicing mysteriously warrants a cover praise, do you?

Anyway, moving on. When you sit down to write a piece of intelligent fiction, more often than not, you tend to want to make it "multi-layered" – ie "not too basic". The audience need brain stimulation, you convince yourself, so let’s add some plot twists. All well and good so far.

The problem is when you go overboard and start to cackle to yourself as you add in every single plot twist and clever idea you can possibly think of. Suddenly, your play lurches from minute to minute like a rodeo bull, throwing off audience members willy nilly.

Plot
The TARDIS materialises. Despite console readings to the contrary, the Sixth Doctor and Charley step out, unexpectedly, into an alien jungle, where they find themselves stalked and then ambushed. They have landed in the middle of one of the Dalek wars, and this time the tactics used by both sides are threatening the very nature of reality.

Is it any good?
Like most of Alan Barnes’ plays, the main thrust of the piece is good. It’s well written, Charley (being a Barnes creation, anyway) is catered for particularly well, and it’s clever.

The trouble is the cackling that haunts the play. It’s just trying so hard to be clever. Pretty much every episode brings a new twist and turn for no really good reason and as Barnesy says in the CD extras, you’ll probably have to listen to it multiple times to get the full idea of what’s going on.

Thanks, but I haven’t even bothered with Momento, so I’m not going to revisit Brotherhood of the Daleks (although I think I got the hang of it. Just).

If that’s where the cleverness stopped, it would be manageable. But there are other things (eg Marxist Daleks singing communist anthems – hence the play’s title) that really aren’t as big or as clever as Barnes and co think. There’s also more than a touch of pantomime at times, which only encourages Baker and Fisher to indulge in some slices of ham when they appear on the menu. And if just one more Big Finish play is set on Spiridon, I’m going to go round there and sort them out. Where are they? Bristol isn’t it?

Nevertheless, the foundation is reasonably solid. There are some very good moments, notably when Charley finally (?) fesses up to the Doctor her secret, revealing that maybe not everything emotional got swept under the carpet by the Russell regime at the end of the Divergent Universe strand. And Baker and Fisher are shaping up as the best of the Big Finish Doctor/companion pairings by far, although the sixth Doctor seems a little retarded in not picking up on Charley’s numerous slips of the tongue.

It’s just a little too silly and overcomplicated.

PS Don’t listen to the CD extras at the end of side one until you’ve listen to the second CD. You’ll understand why afterwards. The idiots.

PPS NIck Briggs doesn’t do many Dalek voices. What a swizz. I only got it because he was mentioned on the cover.

Monday’s “The return of The Saint, a new-look TARDIS and Pan’s Labyrinth musical” news