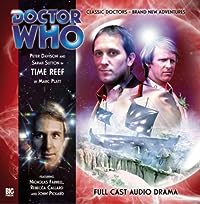 Whether it’s the TV era itself that encourages the writers to come up with cleverer storylines or the editor of the fifth Doctor range (whoever that might be) simply commissioning better pieces, you can usually assume that a fifth Doctor piece is going to be good, with just the occasional minor fluff-up (such as The Boy That Time Forgot.

Here, though, we have Marc Platt, author of the Sylvester McCoy TV story Ghostlight, who can normally be guaranteed to over-write his audio plays something chronic. So we have a battle on our hands: the pretension of the seventh Doctor’s era versus the cold sci-fi of the fifth Doctor’s. Who will win? And should you spend money on the spoils of the war?

Plot
Time Reef, a three-part story by Marc Platt:
A curse on this damned reef – and curse the Doctor who brought us here! Drawn by the siren call of a distress beacon, the TARDIS crash-lands on an uncharted time reef. However, the Doctor, Nyssa and Brewster are not the only mariners marooned on this barren rock. Commander Gammades and his crew of returning war heroes have been similarly shipwrecked, as has the beautiful but mysterious Lady Vuyoki. But there’s something else here, too. A thing of darkness which crawls blindly across the surface of the reef hunting for prey: the Ruhk.

A Perfect World, a one-part story by Jonathan Morris:
Who wouldn’t want a perfect world? Thomas Brewster for one.

Is it any good?
Given Marc Platt’s previous track record, predominantly with William Hartnell/alternative William Hartnell stories, I’m surprised to say that I did quite enjoy Time Reef. Maybe it’s the Greek myth approach, in which the Doctor encounters some sailors clearly modelled on Homeric-era Greeks; maybe it’s the humour, something Davison loves to dabble in. Either way, it’s quite fun to listen to, and it meshes nicely with the continuity-heavy, sci-fi heavy fifth Doctor genre, without being a ponderous Platt piece.

Downsides: Nyssa gets crap-all to do, although that’s pretty much in keeping with the fifth Doctor era; Thomas Brewster is still here; the acting’s all a bit OTT; and the ‘Ruhks’ are pretty much incomprehensible at times.

The companion story, Perfect Day by Jonathan Morris, is a bit slight and filled with sci-fi gibberish, but does, thankfully, write out useless new companion Thomas Brewster. It’s another one of those Panglossian tales that says that humanity and what we have is brilliant, everything else is rubbish (and that perfection is Southern/thin, imperfection Northern/fat, which I’m not sure about as a message), which I could do without. But it’s a relatively amusing little play that ends quickly.

The news for Wednesday 16th November 2011