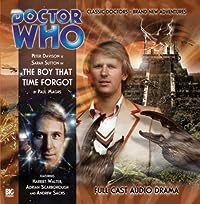 First off, let’s ask ourselves a rhetorical question in a loud, slightly self-righteous voice.

“Is nothing sacred? Nothing, I ask you?”

Just thought I’d get that off my chest. See, this Big Finish adventure takes one of the classic moments of the fifth Doctor’s TV reign, tramples all over, gets into its SUV, drives over it, reverses back for another go, then throws it into an old reservoir where it’s left to float among the dead fish and tyres.

All the same, once you’ve accepted that particular shock to your system, The Boy That Time Forgot is quite fun and interesting. Treading a very fine line between self-mockery and pathos, it manages to avoid being an utterly pointless exercise in mining continuity for all its worth – and then some – and becomes something almost thought provoking.

Be warned, I’ll have to spoil you a little bit after the jump just so you have the faintest idea what I’m on about. It might make you more interested in the play, too.

A lost world. A prehistoric civilization. A dark secret.

The Doctor and Nyssa find themselves transported from Victorian London back to the dawn of time, accompanied by debonair adventurer Rupert Von Thal and no-nonsense novelist Beatrice Mapp. Together these unlikely heroes must brave primitive jungles and battle ravening insects as they make their way to the city of the giant scorpions, ruled over by… The Boy That Time Forgot.

I’m not going to pretend to you that I’m ever going to listen to this again. It’s interesting and fun ‘n all, but it’s simply too silly and too pointless.

Look away now if you don’t want spoilers.

So the basic premise is this: Adric has somehow survived the events of Earthshock, and is ruling over intelligent scorpions on prehistoric Earth using his remarkable powers with block transfer computation. Without the company of human beings, he’s turned a bit strange and with the Doctor and Nyssa in his grasp, he wants a bit of revenge/something on the side.

All is not that simple, however, and there are a number of revelations that make this all hang together.

The basic trouble is it feels a bit like nerd bullying. Now, I’m going to stick my neck out here and say that when I was growing up, I didn’t mind Adric and I nearly cried at the end of the Earthshock. Maybe I was too young to realise he was a bit of a div, but I didn’t mind him.

There I’ve said it.

The Boy That Time Forgot feels like a retrospective attempt to take the piss out of Adric to show just how clever and sophisticated old school Who-ers are and how they never really liked him anyway. What a loser and I bet he’s a virgin, too, not like us. No. We’ve done it with ladies. Ha ha!

Gosh, aren’t we too cool for school?

The events of the final part make up for the silly scorpion antics of earlier episodes and make Adric a little less of a laughing stock and more a tragic character. But the play, as a whole, despite Andrew Sachs’ awesome vocal talents as Adric, felt quite nasty for most of its run.

All the same, it is funny, does have some good ideas and Peter Davison and Sarah Sutton work well as, in turn, a comedic then a dramatic duo, helped by some good lines from writer Paul Magrs.

In the glorious scheme of the Big Finish story arc, I’m also a little unsure of what the point of the play is. There’s closure of a sort at the end, but rather than the “Doctor marooned on Earth” arc that might have emerged from The Haunting of Thomas Brewster, one play later and everything’s back to normal but with a superfluous new companion. Essentially, that very small arc was simply so that we could fit in some laughing at Adric, which seems a bit mean.

Interesting and amusing, but not quite the jolly and nostalgic romp we might have hoped for from its premise.

What TV’s on at the RTS in October? Including Russell T Davies in conversation and Zomboat!

The TV events the RTS will host in October 2019, including Russell T Davies in conversation and the premiere of ITV2’s Zomboat! […]

Review: Doctor Who – Son of the Dragon

A review of the Big Finish play Son of the Dragon
[…]