Today’s Joanna Page is Gideon’s Daughter, a film Stephen Poliakoff made for the BBC in 2005/6.

Despite the fact he somehow manages to assemble fantastic “to die for” casts for his projects and in many ways he’s a very good writer, Poliakoff and I have never got along. To me – how shall I put this? – he’s a bit too Islington.

Either he spends all his time writing about things that might be of major concern at dinner parties in that particular London Borough but aren’t anywhere else. Or he’s writing dire political tracts with sub-texts so obvious they’re basically the text – which they’d need to be since the texts aren’t actually about anything.

Close My Eyes was my first stab at getting into Poliakoff. Clive Owen and Saskia Reeves shag a lot. Only problem: they’re brother and sister. See it’s all a metaphor for how in the time of AIDS people might turn to a safe option, like a sibling. Erm, okay. So they shag a lot more, while Reeves’ husband (Alan Rickman) ums and aahs, suspecting something’s up. And then they stop because they realise it’s a bad idea. And that’s that.

It’s all about nothing.

It’s been downhill since then. He’s done entire series and films that could and should have been précised down to one line: apparently the Victorians had more sex than we thought (Century, if I recall correctly); he did an entire series (whose name I can’t remember but which was in The 50 Greatest TV Dramas) that was deliberately about nothing “to undermine convention”; and with Gideon’s Daughter, we have the staggering revelation that PR and spin-doctoring is all about the surface when really it’s substance that matters.

Close my eyes – and ears – Stephen. 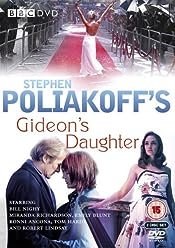 Plot
Bill Nighy and Miranda Richardson star in a story of grief and celebrity, set in the intense spring and summer of New Labour’s election victory and Diana’s death. Nighy is a PR guru who has to stop and re-evaluate his world when his daughter threatens to leave his life, perhaps as revenge for his serial infidelities. Richardson plays a mother trying to bury her grief in an unconventional way after the loss of her young son.

Is it any good?
Like just about everything Poliakoff has written and directed, it looks great, has a stunning cast and feels like quality. It’s just stupifyingly obvious and Islington.

Take this quote from Poliakoff:

Really, Stephen? You realised this as long ago as 2004/5? You’re like a prophet. A soothsayer even.

So here we have a “lack of love” letter to New Labour, set in the year they came to power. Gideon (Bill Nighy), PR guru, is starting to realise that PR and lying are all rubbish and what really counts is his estranged daughter.

Gosh, Gideon. You don’t say. More to the point, does anyone outside of Islington care, really, that PR is all guff?

So that’s pretty much the movie summed up. Gideon slowly going through the motions of PR, meeting Miranda Richardson whose son is dead and is therefore “keeping it real” in comparison, and realising he’s been a bad boy and needs to make it up to his daughter somehow.

At the end of it, you’ll think “How beautiful. How well made. How wonderfully acted. But I don’t have a single iota of information more about the world than I did when I started watching it.”

That, of course, is fine. If what you want from drama isn’t an educational experience or a message, but simply to see some great actors tell the stories of their characters – and through some miracle you can relate to the Islingtonite char – Poliakoff’s work and indeed Gideon’s Daughter are worth watching: it won simply oodles of awards and Bill Nighy in particular does a fantastic job.

I just need a little more, that’s all, particularly if the writer is actually trying to tell me something.

Joanna Page
Our Joanna plays “Diane” (is there significance to the name, I wonder, given the year? Hmm), a beautiful movie star who wants help with her career choices so goes to the “man who knows”.

Just as Christian Bale uses a different American accent in every movie he does, Page seems to use a different English accent in all her English-accented roles (cf To The Ends of the Earth, The Cazalets, From Hell, The Lost World, David Copperfield). Here, though, there’s just a hint of Welsh which makes me think either:

As Diane, she gets another one of her trademark “stunning entrances” (cf To the Ends of the Earth, David Copperfield and possibly even Making Waves) – at a movie premiere, this time:

Once inside, she seeks out Gideon and asks him if he’d help her with her dilemma:

She spells out her problem to him later at another party.

But like a self-obsessed PR man who’s discovered that the less he listens, the more people pay attention to him (Really? Are you sure about that, Stephen?), he blanks her – the fool:

Eventually, she comes back to check he’d been listening in the first place:

But she can’t find him.

That’s about it, really. Shame. We don’t ever find out what Diane needed help on, whether it was a truly difficult dilemm
a that required learned advice, whether she ever made the decision herself, or even much about her at all. She’s there to be the Movie Star: Poliakoff is saying something and he doesn’t need to go beyond stereotypes and archetypes to do it.

If Poliakoff’s your thing, Gideon’s Daughter is available on DVD, complete with an interview with Stephen Poliakoff, a commentary by Stephen Poliakoff and Bill Nighy, cast interviews and a BBC Four Timeshift documentary.

Happy fourth birthday to The Medium Is Not Enough

Happy fourth birthday The Medium Is Not Enough
[…]

Merry Christmas, Happy New Year and what can Santa Rob bring you next year?