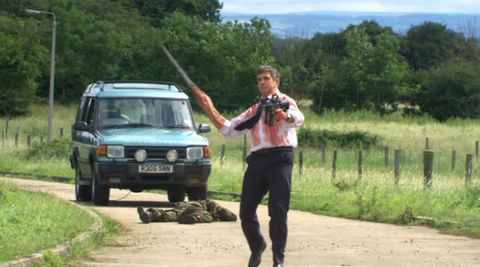 My wife: Torchwood’s a bit rubbish, isn’t it?

My wife: Can we keep watching it?

From a conversation with my wife this morning

Oh dear. And it was going so well. Pretty well, anyway. Okay, it was a little nonsensical at first and the acting could have been outshone by any of Ray Harryhausen’s stop-motion creations from Sinbad and the Eye of the Tiger. But it was fun, well-directed, reasonably intelligent and raised some interesting ideas.

For half an hour.

Then it turned into an old episode of UFO.

And so begin the spoilers. Look away to avoid being spoiled if you haven’t seen the episode already.

It would be easy enough to nitpick the first half. The evil aliens send in an advance party of sleeper agents to scout out a planet before invading it. What’s the point of a sleeper scout who doesn’t know they’re a sleeper scout? How much scouting are they going to do as a relative non-entity who spends all her life in Cardiff? More importantly, what’s the point of sending a scout when you already have more information about the planet than anyone on the planet already has, anyway?

Then there’s Team Torchwood and their rubbish security. It’s hardly Gitmo down there, is it? Ooh, fancy coming and sniffing our equipment, maybe blasting it with an electromagnetic pulse while we give you a guided tour, you suspected alien, you?

All the same, we knew they were a bit pants and that the plots leave a tad to be desired on Torchwood, so why bother nitpicking?

Colin Teague demonstrated some really fine directing skills, giving the show an intimate yet off-kilter look that verged on the excellent. Ianto finally grew a personality from somewhere. There were some fun lines. Everyone else was doing well. There wasn’t even a hint of Chris Chibnall in it anywhere.

True, it wasn’t as fun or embracing of its innate silliness as it was last week. But it was still pretty good, even if the guest alien had all the acting talent of an infant’s school nativity play.

Then it all went pear-shaped. Now, it’s easy to mock Doctor Who for having aliens constantly wanting to invade England for some reason. But aliens that want to invade Cardiff? WTF? Cos, if they managed to get a foothold in Mermaid Quay and Roald Dahl Plass, by next week they could get as far as Port Talbot and maybe even Neath, before the ultimate goal of Bristol is soon in their grasp.

Colin Teague also seemed to hand over directing duties to someone who trained on late 80s local cinema ads for Indian restaurants. I’ve seen more action and excitement in a PowerPoint presentation. The other aliens made the previous guest alien look like an Oscar winner. Still, in their defence, you can imagine the conversation with local cinema ads director: “What’s my motivation?” “You’re an alien with a remote control in one arm and a knife in the other and you want to blow up Cardiff with some nuclear weapons defended by five blokes with guns?” “Ah… Can I ham it up?” “Yeah, all right then.”

Things improved marginally by the end, with the suggestion that Team Torchwood might have an ongoing enemy in the shape of these beasties. Colin Teague started directing again. Yey.

All the same, completely ruined by the last arse half, yet oddly compelling. 10 minutes too long. Too camp for serious, not camp enough for silly. But better than Daleks in Manhattan and Cyberwoman.

Plus what was Murray Gold thinking this week? Clearly not how to write music. QFS.

The news for Friday 6th November 2009