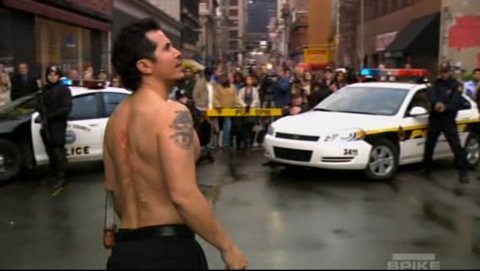 Spike TV is very much the FHM of TV stations. Babes and violence are much its calling, with adolescent boys its audience. It’s tried to go up-market already, with the abysmal Blade: The Series. That didn’t work out at all well.

Now it’s trying again with a mini-series starring John Leguizamo and Donnie Wahlberg. Leguizamo is an ex-soldier, who together with some of his former comrades in arms, decides to rob a bank. Wahlberg is the cop who has to deal with him when it goes wrong.

It’s pretty much a by-the-book police action-thriller, with plenty of shooting, although it has a reasonably taut script thanks to James DeMonaco, writer of The Negotiator. And Leguizamo is very much a character in the same vein as Robert de Niro’s Heat crim – all military efficiency and planning.

It’s Wahlberg’s character who’s the odd, convention-defying one. He’s a sub-editor gone mad. He’s a kick-ass kind of guy, fed up with people’s bad grammar and punctuation, and he isn’t going to take it any more.

Emmy®Award-winning actor and Golden Globe nominee John Leguizamo and Donnie Wahlberg star in Spike TV’s new original scripted series, THE KILL POINT, an eight-hour event focusing on two men as they square off during a bank heist gone horribly wrong and the hostage negotiations that ensue. THE KILL POINT premieres on Spike TV with a two-hour event beginning Sunday, July 22 at 9:00-PM ET/PT.

John Leguizamo is “Mr. Wolf,” the leader of a small group of military veterans who set out to rob a major bank in Pittsburgh. When things go awry, they’re forced to take more than a dozen hostages from all walks of life, including a wealthy and powerful businessman’s daughter. Suddenly, “Mr. Wolf” finds himself battling the police, the hostages and members of his own team while at the same time, fighting his own personal demons from the Iraq war and from his own war at home. Will he be sharp enough to hold it all together or lose control of the situation? And will he find redemption before it’s too late – and does he even care to?

On the opposite side of the perimeter is “Horst Cali,” the Pittsburgh Police Department Hostage Negotiator, played by Donnie Wahlberg, who must go toe-to-toe with “Mr. Wolf.” “Cali” must use his wit and negotiating skills, while managing his own personal issues, to manipulate the situation and convince Wolf to free the hostages before the FBI takes control, or worse.

With time of the essence and the uncertainty of the unfolding events, both men need to remain resourceful and collected or risk losing lives. THE KILL POINT reveals how the hostage takers leverage their situation and how the negotiator tries to unravel their plans. Which man will blink? Who will outsmart the other? Who will survive? It’s a dangerous game of chess played out with human lives at stake.

It’s pretty bog standard to be honest, but it’s still a cut above the rest. It’s smarter than most similar shows and it has more going on in any given five minutes than The Nine had in its entire run. It’s certainly more dynamic than the oh-so-tedious Standoff. If you like police action/negotiator shows, you’ll like this, assuming that the ending is actually worth it and we’re not being led down the garden path.

But in an effort at characterisation, they’ve given Wahlberg this odd desire to correct people’s grammar. It’s very odd. He takes them to task for poor sentence construction and misapplied modifiers. He actually demands a spray can at one point so he can put the apostrophe in the right place on a coffee shop sign. It’s one of the most off-putting character traits I’ve come across in a show and takes you out of the action at inopportune moments. It’s not big, it’s not clever and it’s not funny (Ha, Wahlberg! Do you want an Oxford comma in there or not – answer me that!)

That aside, it’s not bad. Worth a go, and anything that lifts Spike TV onto a higher plane of existence has to be worth supporting. Plus it seems to be providing most of the cast of The Wire with some paying work in between seasons.