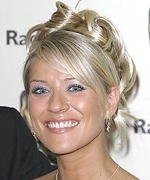 Seeing as The Sun seems to have some kind of direct line to Russell T Davies these days, I guess we have to at least consider the possibility that Zoe Lucker from Footballers’ Wives is going to play The Rani in the next series of Doctor Who.

Is this likely? Well (bearing in mind that all my theories always turn out to be wrong), I think it could be. Well, maybe not Zoe Lucker, but certainly The Rani turning up.

We already have the hint that at least one other Time Lord (for indeed The Rani is a Time Lord/Lady) survived the Time War, thanks to Russell T Davies’ story in last year’s Doctor Who Annual. Then there’s the inherent soapiness of it all that I’ve already pointed out (yes, there’s one Time Lord and one Time Lady remaining in the universe. Think of the possibilities for soapy love triangles). And then there’s Stu’s comments about how the villain next year needs to be someone who can time travel as well – someone who’s The Doctor’s equal, effectively.

Then there’s RTD’s disdain for villains without motivations. The Master – previous number one favourite Time Lord to return – didn’t really have one. The Rani, on the other hand, was a scientist, albeit one with zero ethics. In the new Who, she could therefore be the Doctor’s mirror image: he’s the face of “good” science, she’s the face of “bad” science; she explores the universe, just like him, looking for knowledge. It’s just what she does with it that’s bad.

Can’t say I’d be entirely happy with Zoe Lucker as The Rani, but I can see how it makes sense. What do you all think?

David Tennant: good at British accents; nicht so gut with your German accents though

Over the last few months, I’ve been forcing myself to get up to speed with the Big Finish audio stories. My excuse? I have to write about this stuff. Think that’s bad? I have to […]

Some exclusive clips from Torchwood.