Only one acquisition of note this week – Netflix has picked up Cinco (Spain)’s Costa del Sol Brigade, which doesn’t even start filming until next week – although the Beeb has at least confirmed it’ll be airing Picnic at Hanging Rock (Australia: Foxtel) on BBC Two later this year. But we do have lots of new premiere dates. Many are for last week’s acquisitions, but then we have Walter Presents. As we all know, when it comes to acquisitions, Walter has two basic philosophies:

And this week, option number 2 seems to have become his preferred option, with three shows being slotted into Walter Presents this very day. More on them in a moment.

Credit to TV Wise, Geek Town and Fans of European and World TV Dramas for some of these

A six-part series about a widowed cop with a teenage daughter and who’s doing his best to hunt down some violent robbers in a poor community. He has to work against the higher-ups, who are more concerned by headlines that the communities they police and against the demands of his job in raising his daughter. So far, so ordinary, you might think, and largely it is, despite the presence of Sam Neill (Jurassic Park) as Harry’s boss, complete with his normal NZ/Australian accent. What’s more interesting is that Harry is co-written by the star, Oscar Kightley, a Samoan actor, and the show is bilingual and set largely in the Samoan community. It’s got more in common with UK police shows than with US shows, although there are interesting differences, but beyond the cultural issues and twists, there’s not much here that you won’t have seen before.

Fictional story inspired by a village that was divided by the Iron Curtain along a brook known as the Tannbach. The series explores the traumatic period of German history between the end of World War II and 1952. For the people of the village, the end of the war does not mean the end of hardship – soon the Cold War takes over and the village as well as the people become divided.

When investigative journalist Lucia stumbles across a cemetery of unclaimed bodies at a prison, a wealth of secrets that have been suppressed for decades are unearthed…

Adaptation of a Korean show in which TV journo Paula Patton unwisely promises to catch a notorious serial killer, said killer than deciding to kill her daughter in return for all that hubris. Patton kills herself, but wakes up to find it’s 10 days earlier, all the bad things haven’t happened yet and she has a chance to stop everything before it starts.

I watched the first episode and couldn’t be bothered to watch any more.

Aimless sitcom in which Cleveland-based Mindy Kaling takes her flamboyant son (JJ Totah) to audition at an exclusive New York performing arts school. However, due to various administrative issues, the audition is postponed so while she’s in town, she takes him to visit the father he’s never met – Anders Holm (Workaholics, The Intern), a disillusioned quitter who runs a gym with his much beefy, much stupider, much nicer younger brother Andy Favreau. Everyone gets to know each other and Holm takes him to his audition as Mindy has to go to work. Totah gets into the school, so I think he’s now staying with Holm and Favreau, while Mindy’s gone back to Cleveland.

And that’s the set-up. I’m not sure that really counts as a ‘situation’ for a sitcom, does it? It’s amiable enough, but I watched an episode then gave up, as it seemed to have used up its entire idea.

Despite their inability to coexist, divorced couple Marlon Wayne and his ex-wife Ashley try to stay friends for the sake of their two children, Marley and Zack.

It started in the US while I was on holiday last year, so I haven’t watched it. It’s been renewed for a second season. 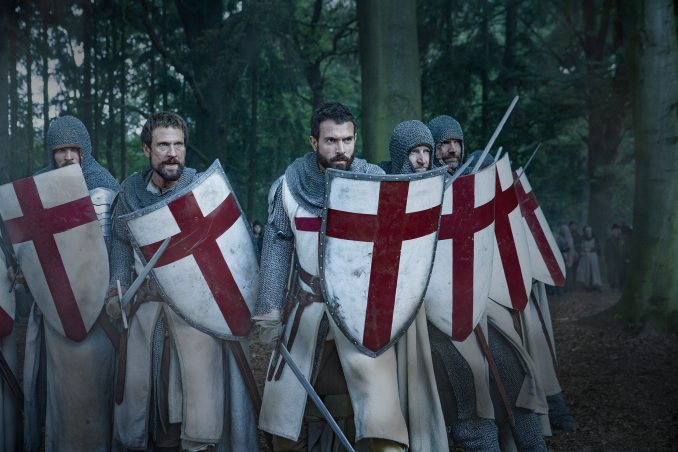 Bargain basement Vikings, but about the Knights Templar. Not totally awful and the throwing in of a quest for the lost Holy Grail gives the knights lots to do, but as soon as the action slows down, it all goes to pot.