In the US: Thursdays, 9/8c, Fox
In the UK: Acquired by Fox UK to air in Autumn

As I discovered while watching the first episode of Seth McFarlane’s new ‘pastiche’ of the Star Trek universe, it’s not actually a pastiche at all. In fact, it’s basically just Star Trek again, but with a few lewder jokes, a bit more workplace comedy and enough changes to names, places, species and Federations to make it ineligible for format-infringement lawsuits. Go into it expecting a slightly duller Star Trek, rather than a new Galaxy Quest, and you might even find something to enjoy.

Indeed, McFarlane himself says that he intends this to be something other than straight pastiche, swapping between outright comedy one episode to straight drama the next. Hopefully, the characters and their interplay will be what keeps us watching, he reckons.

So I went into the next two episodes with an open mind. Is it going to be a comedy this week? A romance? What?

Episode three – directed by the show’s exec producer Brannon Braga (exec producer of Star Trek: The Next Generation, Star Trek: Voyager, and Star Trek: Enterprise) – started out more promisingly with some jokes at the expense of the Star Trek holodecks. Said jokes were even funny for a change.

We then get… another old Star Trek: The Next Generation episode. I’m not sure exactly which one – any of the many trial episodes, such as The Measure of a Man, crossed with any of the “what line must we draw in accepting other people’s cultures?” episodes (eg The Host, Half a Life). For a bit of relevancy, the question under debate was “Should we perform sex-reassignment surgery on babies?”, although the waters were so muddied philosophically and the general intellectual tone of the debate was so low that by the end, the question was more “Can women make a contribution to society?” Still, that’s the state we’re living in right now, so maybe that discussion is as topical as trans rights is.

To be fair, in terms of scripting it’s at least as good as Star Trek: Voyager and most of the first couple of seasons of Star Trek: Enterprise. That’s not saying much, but it is a step up at least.

It’s equally fair to say that The Orville is the best acted, best written, unlicensed Star Trek cosplay with the best production values and special effects you’ll ever see. Like most cosplay, it adds little (here, a replicator that makes cannabis brownies), just remains in thrall to the original.

So if you want to watch Seth McFarlane in his own Star Trek, imagining he was once married to Adrianne Palicki, The Orville might be the show for you. Otherwise, Google “Star Trek funny episodes” and you’ll be bound to turn up something from the original shows that’s much much better. 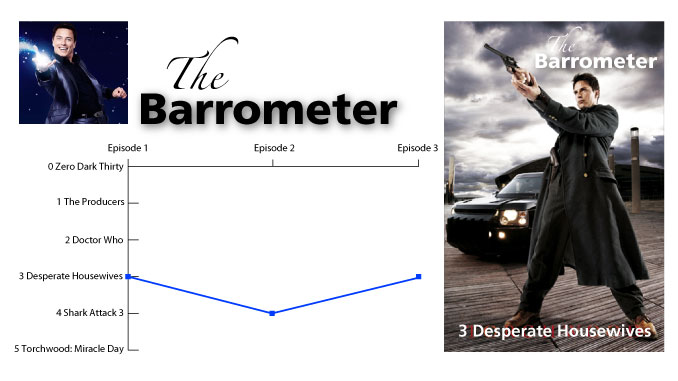 Gosh. What larks they got up to behind the scenes of Star Trek: Into Darkness

Some of my favourite TV characters

Here’s a list of some of my favourite TV characters

What have you been watching? Including The Other Two

It’s “What have you been watching?”, your chance to recommend to fellow TMINE readers anything you’ve been watching this week I haven’t reviewed any TV since last week. I blame Netflix, as well as my […]