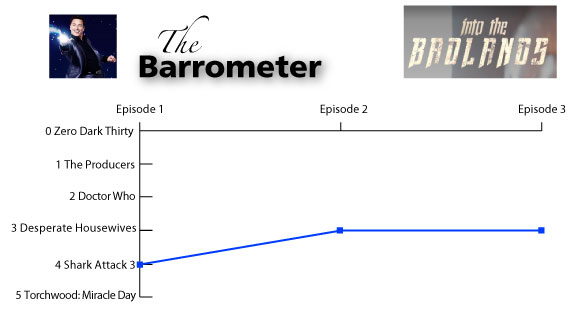 In the US: Sundays, 10/9c, AMC
In the UK: Tuesdays, Amazon Instant Video

In the South Seas there is a cargo cult of people. During the war they saw airplanes land with lots of good materials, and they want the same thing to happen now. So they’ve arranged to imitate things like runways, to put fires along the sides of the runways, to make a wooden hut for a man to sit in, with two wooden pieces on his head like headphones and bars of bamboo sticking out like antennas—he’s the controller—and they wait for the airplanes to land. They’re doing everything right. The form is perfect. It looks exactly the way it looked before. But it doesn’t work. No airplanes land. So I call these things cargo cult science, because they follow all the apparent precepts and forms of scientific investigation, but they’re missing something essential, because the planes don’t land.

Some things, actually. Enough fights per episode. Speed of execution. Engaging, original scripts. Even the magic’s been used only once in the three episodes we’ve had so far.

Don’t get me wrong – it’s very beautiful to look at. The fight scenes even achieve a level of beauty themselves. But just like The Matrix before it, every blow lands without weight. Unlike The Matrix, though, there’s nothing to fill the gap beyond a feudal society where everyone goes around punching everyone as a ‘Clipper’ or a ‘Colt’ (Clipper in training), works in a bar or a field, or is a sex slave. And because it’s AMC, we’re already halfway through the first season of six episodes and we haven’t even entered the Badlands*. I’m assuming that’ll be somewhere around season four.

The show has at least improved a bit since the first episode, having remembered women exist and might not all want to be prostitutes or wives in our dystopian future. There were times when I even became engrossed at points.

But ultimately, this is a poor imitation of a genre that throws out 50 or so movies a year, almost all of them more interesting and more exciting than Into The Badlands. All the same, it’s on Sunday, so what else you going to watch?

Barrometer rating: 3
Rob’s prediction: It’s AMC. Like a dinosaur, it’ll take about two years before it realises it needs to cancel the show

* Confusingly, we may already be in the Badlands and we actually have to leave the Badlands on our future journey