Last week, Diana, Queen of the Amazons, made a lot of appearances on the covers of comics, but didn’t actually show up inside many of them. She was on the cover of Justice League of America #4, fighting some alien priests with Aquaman.

But did she turn up inside to fight some alien priests with Aquaman? Not at all. And as for Aquaman, he was watching tele with Mera instead.

Meanwhile, over on the cover of DC Bombshells, Diana was ready for action with her lightning-equipped, Volume 3, Gail Simone bracelets.

Was she inside using them? Nope. It was just Batwoman and Italian Catwoman flirting with each other in 1940s Berlin at a party of demon-worshipping Nazis. Alternative universe Dullsville that. 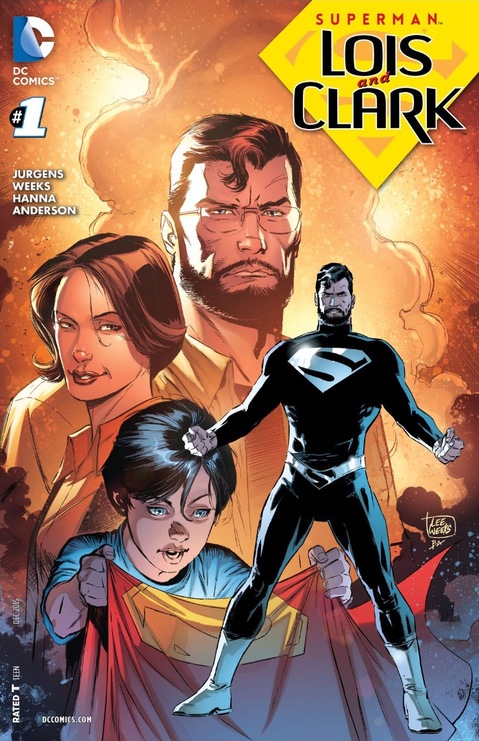 For a bit of contrast, while she wasn’t on the cover of the first issue of limited series nu52/alternative reality Convergence spectacular Superman: Lois & Clark, she was certainly inside. Unfortunately, it was part of yet another flashback to that first Justice League storyline involving Darkseid, so that author Dan Jurgens could make the point that the nu52 universe was a bit gloomy compared to the pre-Flashpoint one.

Reasurringly, despite those mere glimpses, we had a couple of proper appearances, too. The first was in the final return of Sensation Comics Featuring Wonder Woman, which has been cancelled due to a bit of (alleged) internal politics at DC. In its place is coming a prequel series, The Legend of Wonder Woman, starting in January. Prequel to what, you might ask? Well, it’s definitely a young woman on Themyscira and the story of how she ended up coming to Man’s World. But is it a prequel to the nu52/DCYou Wonder Woman’s arrival or is it a prequel to Batman V Superman, due out in March?

Dunno, but I’m sure time will tell.

Until then, we do have a few more Sensation Comics to enjoy. The first sees the return of an old enemy. Can you guess who?

It’s Cheetah. It’s always Cheetah. What’s the matter with you? How was that not your first guess?

Anyway, in this alternative reality, maybe Cheetah isn’t as bad as everyone thought. You can find out more about that after the jump.

Also after the jump is the final installment of Injustice: Gods Among Us: Year Four. Last issue, Zeus was facing off against Highfather in a battle for supremacy among gods for planet Earth. Can you imagine how exciting it’s all going to be and how central Diana will be to the plot?

Well, no. They’ve only gone and Twilighted us.

Sensation Comics #49
Plot
Wonder Woman is at home when the Cheetah invades. However, she soon transforms back to Barbara Minerva, who explains that without the Cheetah serum she’s an invalid. However, it’s starting to wear off and without it, she’ll die.

So Wonder Woman takes her in her invisible plane to the location where the Urzkataraga plant grows.

Something shoots down the invisible jet and Barbara is wounded. To save her, Wonder Woman forces her to eat the raw berries of her serum that they find nearby. Barbara turns into the Cheetah, except… without the human blood of the serum, she no longer has the Cheetah’s fierceness.

But then, surprise surprise, it turns out that there’s a whole bunch of people who turned into animals. Including some quite cuddly animals.

But who is the mysterious ‘doc’ behind it all?

Is it any good?
It’s quite sweet in a way, to have a version of the Cheetah who turns out not only to be nice normally, but physically disabled. It certainly makes the narrative move more smoothly. But it is slightly dull, having the villainess turn good, and has been done to death to other villainesses, if not to Cheetah.

Otherwise, beyond the fluffy, wuffy little animals at the end, it’s a regular, meat and potatoes Wonder Woman strip in which her innate compassion means she has to help someone (usually after or before a fight) and she embarks on a quest. The artwork’s a little different from usual, not especially beautiful, but certainly an unusual take on things, and the invisible plane design is good.

But there’s not enough here to really enthuse or repel, merely cause us to wait for the second part.

Injustice: Gods Among Us: Year Four #24
Plot
Highfather has come to Earth to ask Zeus to stop interfering in the ways of mortals. Zeus refuses, so Highfather decides to freeze time or something.

Zeus explains that despite knowing that everything was Ares planned, he’s so narked off with mortals’ worship of false gods that he went and did everything anyway. However, the Source has told Highfather that Zeus has to stop. What if Zeus refuses to obey the Source? Highfather explains there’ll be a big fight.

So Zeus decides that he and all the other gods are going to quit the entire plane of existence and never come back.

And then, after giving Shazam back the rights to the letter Z, they go, without even a goodbye to his daughter.

But then, she seems relatively okay with that, more interested in telling Superman to get over the fact that Batman broke his heart.

Is it any good?
Well, there are hurried endings and then there’s this. It’s not totally unsatisfying, but it’s essentially a joke on the reader – the whole narrative is concluded by a god turning up using a Motherbox and it’s therefore a literal Deus Ex Machina ending. Nice joke by Brian Buccellato, but in terms of emotional payoff, there’s a great big nothing. Everything’s pretty much as it was at the start of Year Four, little has been done to boost or deepen this Wonder Wonder’s character – indeed, despite the presence of the Greek gods, there’s been very little involvement from her and her reaction to their departure, including the departure of her father, is something that isn’t dwelt on at all, not even for a frame.

The lack of fight was a surprise, too. A nice surprise, actually, since it comes down to grown-ups acting like grown-ups for a change, but anti-climactic nevertheless.

All in all, the usual usual from Injustice then. What will they do next year?

What have you been watching? Including Titans and Nightflyers

It’s “What have you been watching?”, your chance to recommend to fellow TMINE readers anything you’ve been watching this week WHYBW isn’t quite the proverbial frog in a pan of water, but the observant will […]