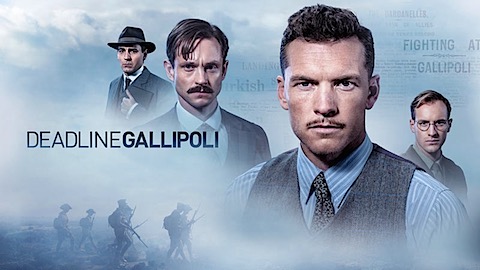 It’s instructive to look around the world and see the emphases placed by different countries on events, even global events. Take the Gallipoli campaign of the First World War, which began exactly 100 years ago this day. The US wasn’t involved with the campaign – or indeed the entire War at that point – so if you look through the US TV schedules, you’ll find that the Smithsonian Channel is the only one airing anything, and that’s a six year old documentary.

Here in the UK, where the Gallipoli campaign is more a “Ooh, I’ve heard of that. Remind me what happened?” event, we have live coverage of the Queen laying a tribute at the Cenotaph memorial this morning; a docu-drama on BBC2 about Keith “Father of Rupert” Murdoch, Gallipoli: When Murdoch Went to War, and his letter to the leaders of Great Britain and Australia that ended up swaying them into abandoning the campaign; and a repeat on More 4 of an archaeology documentary, Gallipoli’s Lost Shipwrecks.

In New Zealand and Australia, where the Gallipoli campaign essentially sparked the dreams of nationhood and is regarded as one of the most important moments in both countries’ histories, it’s slightly different. Indeed, it’s ANZAC Day today, and both countries are predicting it’ll be the largest one ever and New Zealand’s TV One is dedicating pretty much the entire day to Gallipoli programming and is launching big new drama When We Go To War tomorrow.

In Australia, it’s a similar story, particularly on ABC, which again has dedicated the entire day to ANZAC Day coverage. But this is the culmination of existing programming, not the only programming, as the channels have already been doing their best to commemorate the war. The Nine Channel has already aired a multi-part dramatisation of the campaign called Gallipoli and this week, pay TV channel Fox showcase aired a two-part, star-studded TV series called Deadline Gallipoli.

As the title suggests, Deadline Gallipoli eschewed the blow-by-blow recreation of the war in favour of a slightly different angle: the contributions by three journalists to ending the campaign and how they helped to place it so strongly at the forefront of the Australian psyche. Starring Hugh Dancy (Hannibal) as Ellis Ashmead-Bartlett, Ewen Leslie as Harry Murdoch, Joel Jackson as Charles Bean, Charles Dance as General Hamilton, it also features Sam Worthington (Clash of the Titans, Terminator: Salvation) as photographer Phillip Schuler, as well as the likes of Bryan Brown (Old School, FX: Murder By Illusion, The Wanderer), Anna Torv (Fringe), Rachel Griffiths (Six Feet Under, Brothers & Sisters, Very Annie Mary, Muriel’s Wedding), Jessica De Gouw (Arrow) and other luminaries of the Australian acting profession in surprisingly minor roles.

Basically, everyone wanted to be in this one.

However, such is most Australians’ well established understanding of the Gallipoli campaign, you’d actually need to watch both Deadline Gallipoli and Gallipoli in order to really get to know events well, since they all leave out important details in order to get a new angle on the story.

Gallipoli was a pretty straight, blow-by-blow account of the campaign from the point of view of the men in the trenches, showing in gut-wrenching detail the futility and horrors of war. It was so even-handed, in fact, there was almost no attempt to attribute blame anywhere, meaning that although you’d know the landscape, the generals and pretty much every detail about the campaign, you could come out of it not really understanding where it had all gone wrong and why things ended. It was also so focused on the fighting itself that it didn’t really make use of the obvious opportunities to have Winston Churchill (the architect of the campaign) show up, for example.

Deadline Gallipoli, by contrast, spends most of its first episode giving a pretty detailed account of the political beginnings of the campaign and how Ashmead-Bartlett, Bean and Schuler ended up covering it. Dancy gives a surprisingly different performance to his Hannibal turn, but also a more caddish interpretation than James Callis gave, something adding by the rampant shagging he gets to do with Torv. He’s also a bit more heroic than Callis’s Ashmead-Bartlett, whom you might never have known had covered plenty of other wars previously from Gallipoli.

The second episode is where the fighting truly begins, with Deadline Gallipoli focusing on the main push that failed, killing so many ANZAC troops, just as Gallipoli did, before then going through similar ropes to show the lengths that Ashmead-Bartlett and the newly arrived Murdoch went to to try to get word to politicians of just how bad conditions on the ground were, something the army censors couldn’t prevent.

Surprisingly, despite Worthington getting an exec producer credit, he doesn’t get to do that much, the lion’s share falling on Dancy and Jackson’s shoulders, appropriately enough. And we get to see how they become more and more convinced that they must do more than simply observe and report, but also end the battle.

However, despite that focus on the journalists, Deadline Gallipoli doesn’t do that much better at giving us well rounded, historically accurate depictions. For example, while both it and Gallipoli show the sinking of the HMS Majestic, which Ashmead-Barlett was aboard at the time, both show this as a big surprise to him and use it to show either the risks of war or how effete he was (in Callis’s case). However, in real life, the HMS Triumph had been sank two days earlier and he’d actually brought his mattress up on deck so that if the Majestic were sunk, he wouldn’t be trapped.

Deadline Gallipoli’s big failing – at least for an international audience – is that it assumes the viewer knows everything already. Coupled with the shorter running time, that means you will get a better idea of the politics surrounding the war, but surprisingly, despite the big name cast, you’d have been better off watching Gallipoli to get a good understanding of the campaign itself.

On the flipside, Deadline Gallipoli is much better at remembering that there were other nationalities and ethnicities present, with Indians, Sikhs, Maoris, Africans, Australian Aborigines and other members of the British Empire all being represented, some even getting lines. On the other flipside, Gallipoli was a lot more equitable to the Turks, with Deadline Gallipoli only giving us cannon fodder and helpful translators.

So, if you have the time, watch both. Watch the movie as well. None of them are perfect, but together they’ll give you a good understanding and different views of such an important moment in history.